Abortion Doublespeak is Part of Pattern 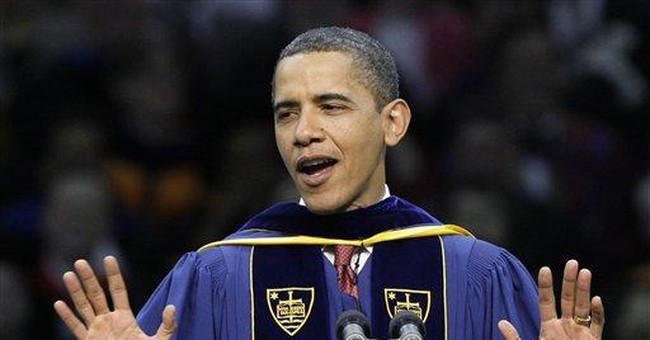 With due respect to the millions who adore President Barack Obama, I just don't understand what causes people to hear only his lofty rhetoric and appeals for unity while turning a deaf ear to his polarizing language and actions, for example, on the subject of abortion.

In his book "The Audacity of Hope," he seemed determined to address every issue from the perspective of achieving some kind of common ground. We'll give a little bit of this to liberals and a little bit of that to conservatives and all live happily ever after.

I'm sorry, but I believe Obama calculatingly employs this approach mainly as a smoke screen to hide his real agenda, which resides anywhere but on common ground. He specializes in paying superficial respect to his opponents' arguments while proceeding to bury them. The examples are endless.

He calls forced union membership "free choice." He masquerades as a fiscal disciplinarian while authoring nationally bankrupting budgets in perpetuity.

He endorses capitalism as a superior economic system while undermining it with other words and actions. He condemns it as "unfair" and decries achievers as "selfish" and "greedy." He's set on restructuring our economy away from the free market and toward government control, from taking over private businesses to setting executive salaries to subsidizing mortgages to nationalizing health care. But he knows better than to condemn capitalism outright, because if he did, the American people finally would wise up to his endgame.

He tells us his decision to continue using military tribunals to adjudicate terrorists is not a flip-flop because he has put new protections in place. This will fool the uninitiated, but experts, such as Andy McCarthy, have shown these changes are merely cosmetic, designed to provide Obama political cover to conceal his flagrant reversal. And they talked about President George W. Bush's unwillingness to admit his mistakes!

In his speech at the University of Notre Dame, Obama said he doesn't believe people should demonize those holding opposing views and that each group can "make its case to the public with passion and conviction … without reducing those with differing views to caricature." But is that the spirit he and his colleagues exhibited at the White House Correspondents' Association dinner? Is that the spirit he demonstrated on the White House Web site when he "caricatured" all pro-lifers as "right-wing ideologues who want to take away a woman's right to choose"?

Yes, he said he changed that language on the Web site, but he also said he had not changed his position. That is where his heart is; that is what he believes. He certainly changes his outward language when necessary to be less incendiary and appear less extreme, but there is no evidence he's changed his convictions regarding the people who disagree with him on this issue -- some 51 percent, by the way, according to the most recent poll.

Indeed, I think his duplicity is most pronounced on the issue of abortion. On the one hand, he champions a mother's right to destroy her baby in the womb, presumably believing it is not a human life. But on the other, he says the decision of whether to abort has both moral and spiritual dimensions. But if the unborn is not a human life, what moral or spiritual components are involved?

Truth be told, it's hard to escape the conclusion that Obama, like other extreme pro-abortion advocates, doesn't care much whether the unborn is a human life, because he has strongly endorsed partial-birth abortion, which occurs at a stage at which even the most morally darkened soul couldn't deny the baby is fully human. And he argued passionately against Illinois legislation that would have provided for medical protection to babies already born as a result of failed abortions.

He says he wants to "honor the conscience of those who disagree with abortion," yet he reportedly intends to reverse a Bush regulation to protect health care professionals who refuse, as a matter of conscience, to perform abortions.

He says he wants to work together to reduce abortions but has signed an executive order restoring funding for overseas abortion providers, which will necessarily increase abortions. So will his appointing judges who will uphold Roe v. Wade and continue preventing states from democratically deciding this issue. Neither act is a demonstration of respect for the opposing view or an avenue toward common ground.

The only ground Obama will join us on is the real estate on which he is standing, firmly and immovably, especially on abortion. He understands that ultimately there can be no common ground about the life of a baby. Those purporting to lobby for it are demanding that we turn the wisdom of Solomon on its head and split the baby in half -- literally.

Obama won't talk straight about the horrors of abortion -- or most of the rest of his agenda -- because if exposed to the disinfecting light of day, it would be stopped dead in its tracks.