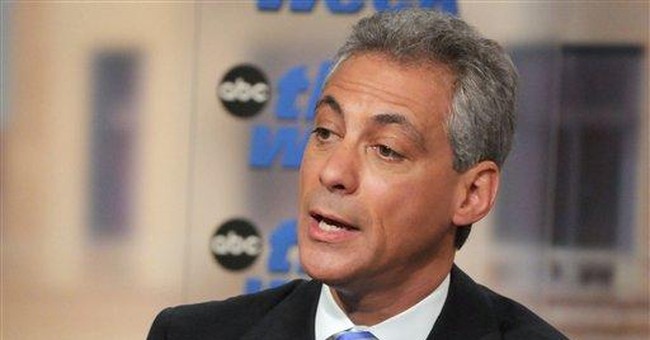 Observing the Obama administration's approach so far to the war on terror is somewhat reminiscent, if you'll accept the crude analogy, of watching Panamanian boxing legend Roberto Duran's rematch against American boxing legend Sugar Ray Leonard. Duran was within his rights to say "no mas" and quit, but it didn't keep him from losing.

But here the analogy breaks down. While Duran could avoid further Leonard blows by quitting, a nation under attack by a warring force cannot prevent further attacks against itself simply by declaring an end to hostilities. Yet that's precisely what the Obama administration appears to be doing in the war on terror, most recently with its outrageously reckless public release of classified Justice Department memos on the legality of CIA interrogation techniques used on enemy prisoners.

Democrats ceaselessly complained about the Bush administration's allegedly misguided approach to the war, contending it was too broad (Bush should have focused almost exclusively on al-Qaida in Afghanistan), that he engaged in cowboy diplomacy, and his treatment of enemy prisoners was inhumane.

Deny it if you choose, but the gravamen of these complaints was that the United States, in many ways, was the bad guy, the aggressor nation that attacked Iraq without provocation or justification, was inflicting gratuitous "collateral damage" on Iraq and its people, and routinely -- and as a matter of policy -- was brutalizing and torturing enemy prisoners in Iraq, Guantanamo Bay and everywhere else our heartless authorities could get their hands on them.

During the campaign, then-presidential candidate Barack Obama embraced these themes wholesale, saying we'd alienated other nations with our unilateralism, stirred up the Arab street against us, and become a virtual terrorist recruitment factory.

Democrats even argued, straight-faced, that our "torture" of terrorist detainees could imperil Americans POWs, as if their beheadings were responses to our slapping. They said we could change all that by reversing course and extending a hand of friendship, peace and cooperation to other nations, particularly those of the Muslim world.

The unmistakable corollary of these complaints against United States policy was that if we'd just quit being so arrogant toward the rest of the world and mean to our enemies, er, criminal defendants, we could bring this war to an end. Or, at least, we could diminish the terrorists' resolve by removing apparently legitimate complaints they have against us and retarding their recruiting efforts.

It really does sound fantastic and silly that anyone could really believe that the United States has brought terrorist wrath upon itself by doing anything other than, perhaps, nobly allying with Israel. It's even more ludicrous to entertain seriously the notion that if we'd just start being nicer, we could improve our international image and make ourselves safer, especially when you consider that being nicer entails lowering our guard and playing into the enemy's hands on a number of fronts.

But this is precisely the kind of silliness that is driving Obama's foreign policy. From the get-go, Obama has been apologizing to the world for the "arrogance" and brutality of the United States; bowing before, kissing and warmly accepting America-bashing books from foreign kings and dictators; flirting with nuclear disarmament while rogue nations rush, undeterred, to join the nuclear club; contemplating serious defense budget cuts across the board, which could jeopardize essential weapons systems; insisting that we cashier war terminology by substituting "overseas contingency operations" for "war on terror" and "man-caused disasters" for "terrorist attacks"; and now releasing internal CIA memos detailing enhanced interrogation techniques, which have demonstrably prevented attacks and saved lives.

Obama pretended to agonize over his decision to release the memos over the objections of his own intelligence officials, but there is no excuse for the damage it will do to our national security by neutralizing the future use of these procedures and inviting "the kind of institutional timidity and fear of recrimination that weakened our intelligence gathering in the past," in the words of former Attorney General Michael Mukasey and ex-CIA Director Michael Hayden. Making it worse, we got nothing in return except for Obama's selective nod to "transparency," as if it's prudent to be transparent with classified intelligence involving our national security.

It is axiomatic that ideas have consequences, a theme being played out by the Obama administration's turning a blind eye to the magnitude of terrorist evil and seeing a rough moral equivalence between beheadings by terrorists and aggressive American interrogation techniques to extract lifesaving information from terrorists.

Commentators who believe Obama only released the "torture memos" to appease his bloodthirsty, Bush-hating, leftist base, which would be bad enough, are missing the point that Obama shares his base's beliefs. Obama is commander in chief, and his guiding foreign policy doctrine is "peace through weakness."