There'll Be No Debate 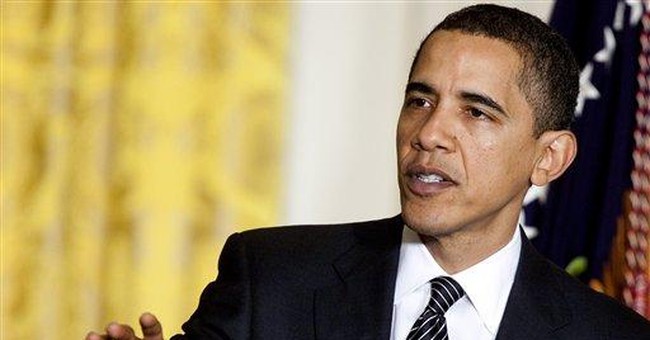 While the erudite, urbane left demonstrates its sophistication and collegiality by personally attacking Rush Limbaugh, the nation is going down in financial flames, largely because of the unchecked policy insanity being unleashed by our new president. Yet his flacks in the media continue to shield him from even rudimentary questions that any other president would receive.

That's why you don't have to wait in suspense to see whether the president will accept Rush's offer to debate the issues. It would not be in Obama's personal interests to shift the public's attention from childish insults about Rush to substantive policy.

Do you honestly think President Obama wants public scrutiny of his policies? Do you think he'd feel comfortable being challenged on his inconsistencies, misrepresentations and astonishingly early breaches of his campaign promises?

You've surely seen his reactions on those rare occasions he's been challenged. Take his response to the Republicans' appeal that he fulfill his promise of bipartisanship on the stimulus package: "I won."

I suppose that if the president were in a debate, he could continue to dodge and obfuscate, but at least someone would be putting questions to him instead of giving him free rein to wreak havoc on our capitalistic system with the undisciplined destruction of a juvenile delinquent playing with his new chemistry set.

I'm just wildly speculating, of course, but I suspect that Mr. Obama would not be too keen on having to answer the following questions, among many others:

How could you sign a bill to spend more than a trillion dollars this nation does not have, purportedly to stimulate the economy, and then immediately convene a fiscal responsibility summit?

Why did you promise to end earmarks and then preside over a bill in your first month in office that includes some 8,500 earmarks?

How can you declare that we have an urgent financial crisis that requires an immediate fiscal stimulus yet sign a bill that even the bipartisan Congressional Budget Office concludes is largely, especially in the short term, not stimulative? How can you justify any non-stimulative expenditures in that bill when the government doesn't have the money for the stimulus programs, much less the frivolous, pork-infested ones that dominate your bill?

Seeing as the bill is not stimulative as advertised, why did you cram it through so fast that even those voting on it couldn't cursorily read through it?

On what possible basis can you justify any federal money to street organizing groups, such as ACORN?

Does your scarce mentioning of the war on terror in your first address to Congress reflect your priorities?

Where are we going to put those poor, mistreated Gitmo prisoners?

How is it statistically possible that so many of your political appointees have tax issues and integrity problems unless you admire and associate with the types of characters who disregard the law?

Why have you already so cynically reneged on your commitment to cashier the revolving door practice of allowing lobbyists to serve in government?

Why are you pushing so hard for socialized medicine when such systems have never worked anywhere they've been tried? Are you so averse to free market principles that you won't even consider the innovative free market solutions that are being proposed?

Now that you've won the election, could you fess up about your relationships with the Rev. Jeremiah Wright and Bill Ayers, as they are influencing your agenda? Didn't the Rev. Wright fuel your passion to remake this nation into something unrecognizable to its Founders? Didn't Bill Ayers mentor you on your radical education agenda?

Why are you causing your office to be run as a poll-driven campaign war room in the pattern of the Clinton White House rather than as the model of statesmanship you promised? Why are your minions targeting your critics, such as Rush, Rick Santelli and Jim Cramer? Why are you working with your Democratic colleagues to shut down conservative talk radio and pretending you're not?

Do you disagree with a solitary item of Planned Parenthood's extreme pro-abortion agenda?

Please explain your castigation of corporate CEOs for extravagance with private money while you are doing likewise with public money. As a former constitutional law professor, could you please cite the provision of the Constitution authorizing your transfers of private wealth to delinquent mortgage debtors?

Is it your statist ideology that compels you to reverse the successful welfare reform? How do you square your pledge not to raise taxes on the middle class with your cap and trade scheme, your plan to raise the ceiling on payroll taxes, your health care extravaganza, and your charitable deduction phaseout?

Will you please quit purposely spooking the market?

How long do you think the lapdog liberal media can shield you from accountability?