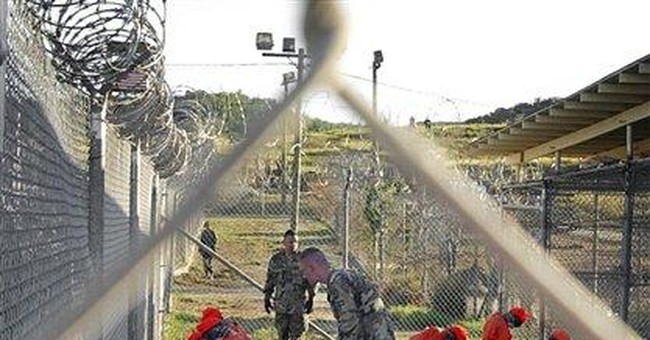 During his first week in office, President Barack Obama signed an executive order requiring that the Guantanamo Bay detention facility be closed within a year. Later communications from his office disclose that he hasn't yet fully explored the potentially negative consequences of closing the facility. The problem, he said, is more complicated than it first appeared. This raises a number of questions, Mr. Gibbs:

--How can President Obama credibly maintain that the issue is more complicated than he thought, when people have been raising these problems for years? Is he just now discovering that there are serious consequences involved, or did he already know and finesse the issue during the campaign for political purposes? If he didn't know (and even more so if he did know), doesn't he owe former President George W. Bush an apology for his unfair criticisms? Doesn't he owe the American people an explanation as to how he could possibly have been unaware of such rudimentary aspects of this fundamentally important national security issue?

--Given that he now concedes there are unexplored complications, wasn't it precipitous and imprudent of him to issue the closure order? What if further research indicates there are no reasonable alternatives other than to bring these prisoners to the U.S. mainland and grant them the full panoply of constitutional rights? Or does he actually favor full-blown constitutional rights for terrorists? If so, will he not be leading America back to its pre-Sept. 11, 2001, mindset, which treated terrorism as a law enforcement matter rather than a military one?

--Democratic Rep. John Murtha praised the Gitmo closure order as a "first key step in restoring America's image and credibility in the world." Murtha said, "The problem with Guantanamo was never about its bricks and mortar (but) that its very existence stains and defies the moral fiber of our great nation." Based on the president's repeated statements, it's obvious that he essentially agrees with Murtha that the primary problem Gitmo poses is its effect on America's image in the international community. That being the case, why won't the president's simultaneous executive order banning "torture" rectify this supposed image problem, thereby allowing us to preserve the facility and avoid these complicated issues concerning its closure? After all, if, as Murtha says, it's not about the bricks and mortar, then why don't we keep using the same bricks and mortar and handle our image problem with clear publications of the president's orders forbidding enhanced interrogation techniques? Isn't the honest answer that the president is more worried about his image with his hard-core anti-war base than America's image internationally? But if I'm wrong and his overriding concern truly is with international opinion, then could you please explain why he and other Democrats are constantly exaggerating and mischaracterizing the alleged incidents of abuse? We know there were only three cases in which waterboarding was used. Also, if America's image is the problem, why does Mr. Obama continue to sanction the charge that the Bush administration was behind the regrettable incidents at Abu Ghraib, when the evidence indicates it did not authorize them and swiftly punished those who were culpable? Wouldn't it better serve America's international image if the Obama administration made clear to other nations that these were renegade acts never authorized by the Bush administration? Or would the damage to the president's image with the fringe left from such a clarification be a price he's unwilling to pay, even if it would serve his stated goal of repairing America's image?

--What if the president's further study reveals that our national security strongly militates in favor of keeping Gitmo open? Is the president prepared to say he is more concerned with America's image than its safety?

--In that the president has decided, categorically, to forbid whatever he believes constitutes "torture," could you please explain to the American people what alternative techniques he might implement that are reasonably designed to extract lifesaving information from terrorists? We do know, do we not, that information gleaned through these controversial techniques prevented real attacks and saved real lives? If the president is aware of no effective alternative techniques, will he tell the American people that he'd rather terrorist attacks occur and American lives be lost than debatable techniques be imposed? With all due respect, it is not a sufficient answer to say that in theory, enhanced interrogation techniques don't work, because we know that in reality, they do -- and did.

--Now, could we please turn to the question of abortion and consider how President Obama's controversial executive order will fulfill his campaign promise to bring America together?

Here's What Happened When a Man Brought a Cardboard Cutout of Trump With Him to Dialysis
Beth Baumann
More Than 1,100 Former DOJ Staffers, Including Current MSNBC and CNN Analysts, Call on AG Barr to Resign
Beth Baumann