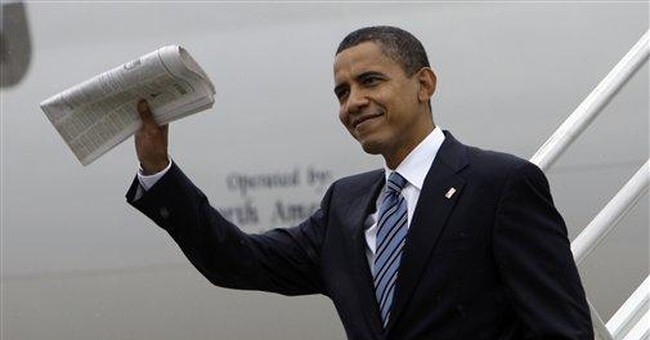 Why does Barack Obama play hide the ball with his personal resume, concealing his extreme leftist ideology and denying his damning associations? Question kind of answers itself, wouldn't you say? Be concerned, very concerned.

Obama hides his liberalism for the same reason every other liberal presidential candidate has: The electorate tilts center-right. This isn't just my gut speaking or some self-serving theory I'm propounding.

The Battleground poll -- a well-respected bipartisan affair conducted by the Terrance Group, a Republican polling organization -- and Lake Research Partners, a Democratic organization, tells us 60 percent of Americans identify themselves as conservatives.

So John Kerry in 2004 and Barack Obama in 2008 didn't deny they were the most liberal senators because liberalism has become a dirty word through a clever conservative propaganda campaign. They denied it because liberalism is a minority position in reality, albeit an extraordinarily effective vocal minority.

Obama will only come clean about his liberalism when he thinks he is in safe territory, as he did at the San Francisco fundraiser where he trashed small-town Americans, thinking his words wouldn't reach those he was belittling. Nor is Obama upfront about the liberal nature of his policy proposals, choosing instead to mask their liberalism and even disguise them as conservative.

How else do you explain his whopper that he is recommending a tax cut for 95 percent of Americans when we know that the bottom 50 percent of income earners pay very little income tax at all? His plan calls for giving many of these people tax credits, even though they are paying no tax or are paying a small enough amount that the credit would result in them netting money from the government. As others have pointed out, this is welfare, not a tax cut. "Tax cut" resonates well among center-right voters; "welfare" does not.

On foreign policy, suffice it to say that Obama would never want the center-right electorate to know the extent of his appeasement and retreat-and-defeat orientation, his support for the bankrupting and sovereignty-forfeiting Global Poverty Act or his goal of eliminating U.S. nuclear weapons, as reported by The New York Times.

But where Obama is really playing hide the ball is in his past and present associations. His campaign operatives and the mainstream media have done their best to divert any attention from these relationships by saying it's dirty campaigning to smear him through the acts of others. Well, folks, that's not how ordinary people think. In sizing up someone's character, we often consider with whom they associate. Sue us if you wish -- even start a class action -- but it won't change human nature, which leads us, rationally, to consider this factor.

Endless reports and many books have been written documenting Barack Obama's discipleship in the thug tactics of Saul Alinsky's "Rules for Radicals." For Obama, community organizing was not an innocuous vehicle for assisting the needy. It was and is a cynically dangerous vehicle for the politics of extortion and intimidation and the usurpation of power by socialists, whose ideology and methods more closely resemble those of Josef Stalin than those of Mother Teresa.

These sources also prove beyond any reasonable doubt Obama's close -- not remote, not casual -- relationship with the nihilistic, America-hating, Pentagon-bombing radical William Ayers. Obama glibly dismisses the very idea that he should be blamed for a passing acquaintanceship with a guy who was bombing the Pentagon "when (Obama) was 8 years old."

Enough with the insults to our intelligence, Mr. Obama. You were not 8 when you launched your state Senate campaign in Ayers' home. You were not 8 when you served in the Chicago Annenberg Challenge, which Ayers was instrumental in establishing. You are not 8 today, though you are still Ayers' close friend, while he remains an America-hating radical, wholly unrepentant about his terrorist activities, other than to say he didn't do enough.

The fact that Obama would be seen in the same room with this guy should disqualify him from presidential aspirations. But he's not just in the same room. In many ways, he's on the same page, as evidenced by his default instinct to apologize for America and to blame America first.

But Obama will continue striving to hide the ball on this association and many others, including those with the Rev. Jeremiah Wright and Tony Rezko.

But beware; if anyone dares to expose those relationships and their sordid details, he will open himself up to malicious and fraudulent charges of racism and other Saul Alinsky thug tactics that make Bill Clinton's politics of personal destruction look like child's play.