Obama's Halo Not Attached with Superglue 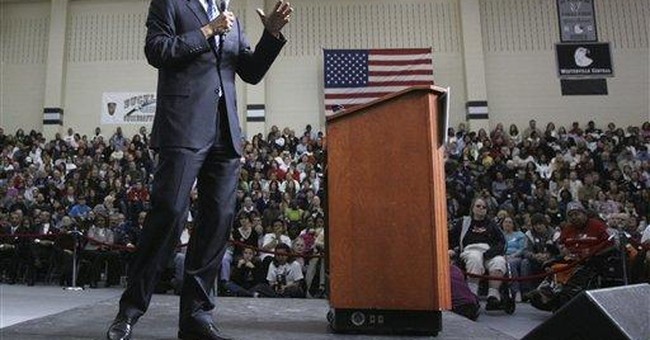 To me, the greatest irony of the Democratic primary contest is that while Hillary Clinton has tried desperately to make herself more human, Barack Obama has basked in the efforts of others to make him less so.

Eventually, Obama will be brought back down to earth from his pseudo-divine perch. When that happens, there will be plenty of areas of vulnerability for his opponent -- presumably, John McCain -- to exploit.

Unhappily for Hillary, she hasn't been able to seize on Obama's weaknesses. This is because many of them she shares, and the others she can't politically afford to draw attention to. Obama's extreme liberalism across the board makes him ripe for attack from the right, or even the center, but Hillary is hardly in a position to make a credible case against him there, except possibly on national security and Iraq.

With cool, premeditated calculation, Hillary methodically positioned herself as plausibly hawkish enough for the general election. How was she supposed to know she would face such a formidable challenger in the primaries?

Her response hasn't helped. Instead of defending her position on Iraq and presenting Obama as irresponsibly dovish on foreign policy, she has distorted her vote on the Iraq War resolution to con the base into believing she was with them all along.

In trying to put that square peg into a round hole, she has succeeded only in making herself look John Kerryish, which is to say wishy-washy, unintelligible, deceitful and downright ridiculous on the issue. The net effect is that she has earned further contempt from the base and made no inroads with anyone else. Meanwhile, Barack has watched this delicious turn of events unfold while polishing his halo.

Belatedly, Hillary is now running ads suggesting Obama is unprepared and ill-suited to receive that 3 a.m. national security crisis call in the White House. But not having previously demonstrated Obama's lack of national security bona fides nor her own possession of them, her attack ads are likely falling flat. It would be like LBJ running the TV ad of the little girl picking daisies only to be incinerated in a nuclear attack without first having established -- albeit fraudulently -- that Barry Goldwater was a trigger-happy, sadistic warmonger. (And liberals talk about the politics of fear!)

But looking ahead, Obama will not escape scrutiny from John McCain in the general election, despite McCain's own liberal proclivities on too many issues. If I'm wrong and McCain treats Obama with kid gloves, he'll go the way of Bob Dole and Jack Kemp, who seemed to have more compliments than criticisms for Clinton and Gore in 1996.

You'd think Obama would be getting nervous about the artificial pedestal he's been placed on. As an object of idolatry with an aura of inerrancy, there is not much margin for error. But Barack Obama, like the rest of us, is mortal.

Even for McCain, Obama's liberalism is a target-rich environment. It's not only woefully out of sync with the center-right electorate, but it also belies his claim that he's an exemplar of bipartisanship. Talk is dirt cheap, though Hillary didn’t succeed in exposing Obama's sophistry on this claim, either.

McCain would be well advised to make Obama own his socialistic affinities -- on taxes, spending, health care and more. He should also show how radical Obama is on abortion, where he's out of step with the majority of Americans.

And no matter how uncomfortable it may be to broach the issue, McCain should make Obama answer for membership in a church whose long-time pastor's magazine lauded the overtly racist and anti-Semitic Louis Farrakhan as "truly epitomiz[ing] greatness." People are missing the boat in thinking Obama's vulnerability here can be sidestepped with a semantic dodge over whether to denounce or reject Farrakhan's support.

The real question is why Obama would choose to be in a church whose leading spiritual authority holds such repugnant views. This is his pastor we're talking about, holding forth on a very important matter, not some tangential acquaintance discussing some inconsequential topic. On a related matter, Obama has explaining to do as well on his tepid support for Israel.

But where Obama is most vulnerable is on national security and Iraq, the very areas where McCain has the most credibility. Though Obama has received a pass from Hillary and the press on these subjects, and though he boasts prescience and wisdom on them, his record and statements make him a sitting duck.

Concerning Iraq, many of his predictions were wrong, his factual assertions false, his assessment and analysis erroneous, and his prescriptions reckless. If McCain is smart, before November he'll have Obama in that infamous tank with Michael Dukakis, wearing that same silly-looking helmet.