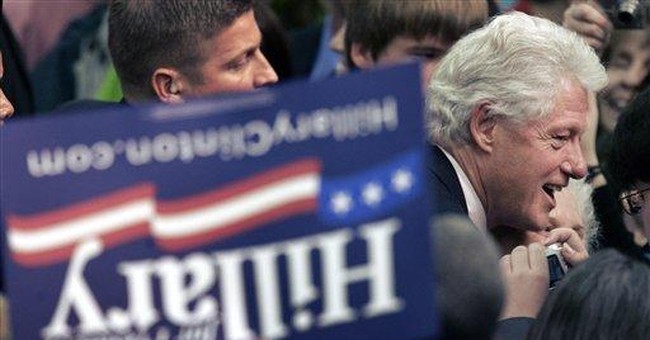 It's a good thing for Hillary Clinton that she and her political-bodyguard husband aren't Republicans. She'd be out on her ear for race-baiting alone.

Do you remember a few short weeks ago when Hillary suggested that the real mover and shaker on civil rights was not MLK but LBJ, without whom MLK's efforts would have been for naught, essentially? Do you remember the Clintons' surrogate, Robert Johnson, smearing Barack Obama with allusions to his youthful drug experimentation?

Liberals, including the mainstream dinosaur media, circled the wagons around her, insisting she couldn't possibly have intended racial slurs. Even many conservatives hastened to defend her against this charge.

Had a Republican made a statement like Hillary's about the respective accomplishments of MLK (an African American) and LBJ on the heels of making a similar comparison between Obama (an African American) and herself, liberals would have savaged him and driven him out of the race. They would have invoked the irrebuttable liberal presumption that conservatives are racists. Just ask Trent Lott.

With Democrats, the opposite presumption applies. Hillary couldn't possibly have intended a racial slur, nor could she have been guilty of racial insensitivity, because she is a liberal Democrat and liberal Democrats are enlightened and incapable of racism. You need look no further than the race-based assaults by liberal cartoonists against Condoleezza Rice to understand the magnitude of this double standard.

In fairness -- a fairness that liberals never extend to similarly situated Republicans -- Hillary might not have intended for her MLK allusion and Robert Johnson's reference to Obama's drug use to have subtle racial undertones. And because of the double standard that gives a pass to liberals for such insensitivity, Hillary likely wouldn't have to worry about this matter any further except for one stubborn fact. Apart from the MLK and Johnson statements, the Clintons really did, in the brilliant light of day, brazenly adopt a strategy designed to racially charge this contest to capitalize on national demographics: There are fewer blacks than whites and Hispanics.

Bill Clinton's feigned lament -- repeated loudly and often -- that voters were choosing their candidates on the basis of race and gender was intended to spark a backlash among non-blacks. Clinton's Machiavellian ends were so transparent that even stalwart Clinton supporter Ted Kennedy called him onto the carpet for them and now has publicly endorsed Obama.

A sweet aroma of irony fills the air as the Clintons' loathsome, sinister tactics, being used against fellow Democrats for the first time in a big way since Bill's first presidential primary contest, are coming back to bite them.

This brings home a truth many of us have always understood: The Clintons, despite Bill's charm and their nonpareil adroitness at ruthless politics, are virtually powerless without their liberal enablers in the Democratic Party and the mainstream media. If Democrats hadn't sold their souls, Clinton would have been convicted in his impeachment trial, and they both would have been written out of the party for Travelgate alone and who knows what else.

Another reality has also come back to the surface through this unfolding of events. The legacy of the Clintons, even for many Democrats, is a two-edged sword. Depending on which side you examine, this legacy is either a period of prosperity or one of unspeakable scandal. Anyone having to run on that mixed legacy -- like Al Gore -- has to walk a fine line, hoping to fix the voters' focus on the prosperity side.

Had the Clintons not crossed the line in their strategy against Obama, Hillary might have enjoyed the undeserved luxury of being permitted to continue walking that fine line, even though it would have been a disgusting fiction since she was in the thick of many of those scandals. But their gambit of injecting race into the campaign and otherwise flagrantly lying about Obama's positions was too smart by half. It will probably have the irreversible effect of dredging up in people's minds the worst memories of the Clintons.

When you contrast this negative side of the Clintons against Obama's image of hope and change -- as shallow as that might sound to us conservatives -- the Clintons might have just written the final chapter on themselves, just maybe.

As one who has never been an admirer of the Clintons, I would be celebrating over all this but for the stark reality that Obama could very well be much tougher to beat than Hillary Clinton. So it is with a profound sense of the bittersweet that I observe what could be the Clintons' political demise.

Another Fauci Lie About Masks and the COVID Vaccine Comes Back to Bite Him
Townhall
Tweeter asks for reasons why any civilian 'needs' a semi-automatic rifle with all the attachments (except for a chainsaw bayonet)
Twitchy
Randi Weingarten Shoots Herself and the Biden Admin in the Foot With a Huge Admission
Redstate
Insanity Wrap #209: White People Even Walk Racist
PJ Media