How Conservatives Should Celebrate the Inauguration 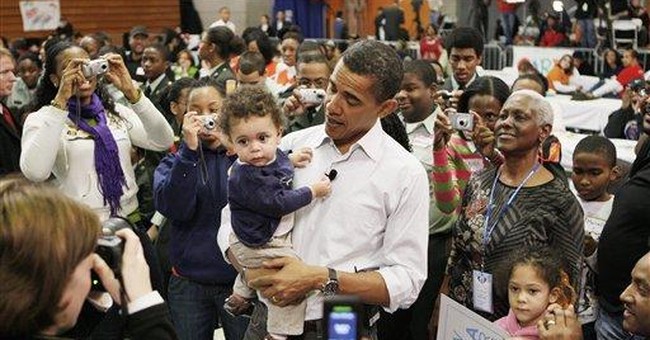 "If there is anyone out there who still doubts that America is a place where all things are possible; who still wonders if the dream of our founders is alive in our time; who still questions the power of our democracy, tonight is your answer." - Barack Obama, Victory Speech, November 4, 2008

Yesterday was Martin Luther King's birthday, which is America's only national holiday to honor an American citizen. The day before, which was Sunday, the incoming Obama administration staged an Inauguration Celebration at the Lincoln Memorial around the theme "We Are One," which was also the theme his presidential campaign. As several of the speakers -- including the president-elect -- noted, the Lincoln Memorial was the site of Martin Luther King's historic civil rights march and his famous dream for the American future. The president-elect reiterated that dream -- that Americans would judge each other by the content of their character and not their racial or ethnic identity. Today America welcomes Barack Obama as the first black president in its 232-year history.

How should conservatives think about these events?

First we have to recognize and then understand that whatever happens in the Obama presidency, this Inauguration Day is a watershed moment in the history of America and a remarkable event in the history of nations, and thus a cause for all of us who love this country, conservative and liberal, Democrat and Republican, to celebrate.

Second, in order to do this as conservative – as conservatives who have been through the culture wars -- we need to get past the mixed feelings we will inevitably have as the nation marks its progress in moving away from the racial divisions and divisiveness of the past. These feelings come not from resistance to the change, but from the knowledge that this celebration should have taken place decades ago and that its delay was not least because our opponents saw political advantage in playing the race card against us and making us its slandered targets.

If we celebrate Martin Luther King's birthday at a time of presidential inaugurals, this is thanks to Ronald Reagan who created the holiday, and not to the Democratic congress of the Carter years, which rejected it. If Americans now have accepted an African American to lead their country in war and peace that is in part because an hysterically maligned Republican made two African Americans his secretaries of state. And if, after the passage of the Civil Rights Acts, race has continued to be a divisive factor in our politics over the last forty years that is because the generation of Sharpton and Jackson and their liberal supporters have made it so. What conservatives need to recognize in getting past these feelings (and therefore to celebrate) is that because of this political reality it is only they themselves who could end it.

Third, as conservatives who embrace the institutions our founders created we need to separate the two roles of the presidency -- symbolic and political. Today the symbolic role takes precedence and we need to appreciate the specific aspects of that symbolism in the new presidency of Barack Obama, and put aside our anticipations of the policies he may later put in place. There will be time enough for that.

The Inaugural Celebration at the Lincoln memorial was given the theme "We Are One," which continued the unity theme of Obama's presidential campaign. This theme has a special resonance for this moment in our history when we are more divided as a nation than at any time since the Civil War. In his victory speech on November 4th, Obama said that his victory was "the answer spoken by young and old, rich and poor, Democrat and Republican, black, white, Hispanic, Asian, Native American, gay, straight, disabled and not disabled -- Americans who sent a message to the world that we have never been just a collection of individuals or a collection of Red States and Blue States: we are, and always will be, the United States of America!"

Rich and poor, black and white, we are one -- the Inauguration Celebration at the Lincoln Memorial was designed to dramatize this idea. In his own speech at Celebration the president-elect paid specific tribute to Lincoln for saving the union, and to Martin Luther King for dreaming of a nation united beyond race. There were more black faces on the stage of this celebration and more black faces in the hundreds of thousands who attended it than at any time for any inauguration-related event in the nation's history. This was already a testament to Obama's success in advancing his vision.

Barack Obama is the head of a party whose leaders have accused the outgoing president and his Republican Party of betraying their own country by waging an illegal, aggressive and unnecessary war and in the process destroying its Constitution and the liberties it guarantees. By contrast, in his victory speech in November, Barack Obama repeated his pledge to be president of all Americans, liberals and conservatives, Democrats and Republicans, and thanked the American troops whom a Republican president had sent to Afghanistan and Iraq in these words: “Even as we stand here tonight, we know there are brave Americans waking up in the deserts of Iraq and the mountains of Afghanistan to risk their lives for us.”

In the speech announcing his economic stimulus package Obama deliberately passed up the golden opportunity it presented to blame the biggest financial disaster in the nation's history on Republicans, as Nancy Pelosi and other Democratic leaders would inevitably have done.

At the "We Are One" celebration, orchestrated by his team, the script that was given to liberal actress Marisa Tomei read a passage from Ronald Reagan’s inaugural which paid tribute to him as a leader who preached tolerance and compassion and a united nation. Another actor read similar sentiments from Republican president Dwight D. Eisenhower's Farewell Address without so much as mentioning its famous admonitions about the "military-industrial complex," as a Democrat invariably would. Liberal actor Jack Black then paid tribute to another Republican hero, Teddy Roosevelt, as America's pioneer environmentalist, and Tiger Woods presented himself as the proud scion of a military family, praising his family's service and paying tribute to America's armed forces. Even the music was inclusive with Country and Western singer Garth Brooks playing an extended set.

In his appointments, Obama has also pursued the national unity theme, ceding to Republicans vital positions as heads of his National Security team, and to conservatives and centrists the key positions on his economic team. As his Secretary of State and his chief of staff he has appointed two Democrats prominently identified with support for the Iraq war, the most divisive national issue since Vietnam, and one over which much of the leadership of the Democratic Party, including its standard bearers in the last two presidential elections, played disgraceful roles.

These appointments are not merely symbolic gestures but solid commitments to policies that are at least centrist and do not take America’s world leadership lightly. Naturally, Obama has made appointments -- and policy commitments -- to the left as well. Conservatives should and will be watching these, opposing those which are destructive to the national interest. Conservatives will also recognize that having lost the election, these battles will not be easily won.

But on this Inauguration Day, before the onset of these political battles, it is important for conservatives to focus on what has already been gained in political terms by symbolism of Obama's election and the decisions he has made.

It is conservatives who should be especially appreciative of the dual nature of the American presidency, as conceived by the Founders, which differs from parliamentary systems, where the Prime Minister is the political head of his party and the political ruler of nation. In parliamentary systems such as England’s, it is the Crown which is the nation embodied, and whose wearer is the figure around whom its citizens rally, and whom they serve in time of war.

It is the Crown function of the American presidency which the Inauguration Ceremony celebrates. Only time will tell how successfully Obama manages to unite the nation in the face of the crises and enemies which confront it. But right now with 78% approval ratings -- and thus even the majority support of conservatives and Republicans -- he has made an important start. Symbolically, America is united around his ascension to the White House. This ascension has political implications, whose implications -- for the moment at least -- are quite large.

All over the country Americans have invested their hopes in Obama's ability to pull his country together to face its challenges. Among these Americans are millions -- most likely tens of millions -- who have never identified with their government before, who felt "outside" the system they regarded as run by elites, who ascribed its economic troubles to the greedy rich, who bought the Jackson-Sharpton canard that America was a racist society and they were locked out, who would have scorned the term "patriot" as a compromise with such evils, and who turned their backs on America's wars.

But today celebrating their new president are millions of Americans who never would have dreamed of celebrating their president before. Millions of Americans -- visible in all their racial and ethnic variety at the Lincoln Memorial on Sunday -- have begun to feel a patriotic stirring because they see in this First Family a reflection of themselves.

The change is still symbolic and may not last. A lot depends on what President Obama will do, which is not a small question given how little is still known about this man and how little tested he remains. Some of this patriotism may be of the sunshine variety– in for a day or a season, when the costs are not great. Or, more cynically: In to show that their hatred for America is really just another form of political “dissent.” Yet whatever the nature of these changes they cannot for now be discounted. Consider: When President Obama commits this nation to war against the Islamic terrorists, as he already has in Afghanistan, he will take millions of previously alienated and disaffected Americans with him, and they will support our troops in a way that most of his party has refused to support them until now. When another liberal, Bill Clinton went to war from the air, there was no anti-war movement in the streets or in his party’s ranks to oppose him. That is an encouraging fact for us in the dangerous world we confront.

If it seems unfair that Barack Obama should be the source of a new patriotism – albeit of untested mettle -- life is unfair. If the Obama future is uncertain and fraught with unseen perils, conservatives can deal with those perils as they come. What matters today is that many Americans have begun to join their country's cause, and conservatives should celebrate that fact and encourage it. What matters now is that the American dream with its enormous power to inspire at home and abroad is back in business. What it means is that the race card has been played out and America can once again see itself -- and be seen -- for what it is: a land of incomparable opportunity, incomparable tolerance, and justice for all. Conservative values -- individual responsibility, equal opportunity, racial and ethnic pluralism, and family -- are now symbolically embedded in the American White House. As a result a great dimension of American power has been restored. Will these values be supported, strengthened, put into practice? It is up to us to see that they are.