Kavanaugh Confirmation Hearings Showcase the Paranoia of the Resistance

David Harsanyi
|
Posted: Sep 07, 2018 12:01 AM
Share   Tweet
The opinions expressed by columnists are their own and do not necessarily represent the views of Townhall.com. 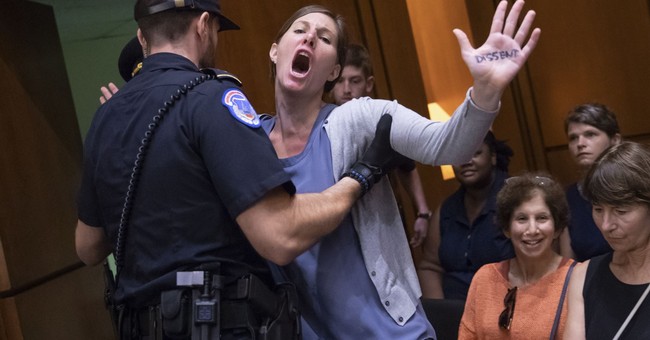 When cameras at Brett Kavanaugh's Supreme Court hearing caught sight of a woman named Zina Bash, a Republican lawyer, with her arm resting in a position that allowed her index finger and thumb to almost touch -- a purportedly racist gesture -- a conspiracy theory broke out on social media, accusing Bash of signaling her support of white nationalism.

As it turned out, Bash's background is both Mexican and Jewish, and more importantly, as far as we know, she's never uttered a prejudiced word in her entire life, much less participated in an alt-right signaling scheme. Of course, even if Bash were a blue-eyed blond Protestant, the accusation would have been completely bananas.

In another incident, a picture of Kavanaugh allegedly declining to shake hands with Fred Guttenberg, the father of a girl murdered in Parkland, Florida, went viral. The belief -- this one spread not only by "Resistance" activists but also by pundits, reporters and senators -- was that Kavanaugh, a heartless corporate elitist stooge of the gun industry, refused to demonstrate even a perfunctory kindness toward a gun victim's parent.

In reality, a video shows that Kavanaugh was approached by a stranger in a room filled with protesters griping at him all day. Security quickly intervened. Guttenberg, though, went on CNN and other networks and asserted that Kavanaugh recognized the bracelets he wears to commemorate his daughter and called security to avoid the interaction. This seems highly unlikely, yet no one, as far as I know, has even challenged the contention.

In the hyperactive imagination of people who think the Russians have stolen their free will and vote, anyone supporting Trump and, by extension, anyone supporting his Supreme Court nominee -- an establishmentarian who worked for not only the suddenly admired President George W. Bush but also Elena Kagan, a current Supreme Court justice, at Harvard -- is merely in league with bigots who've taken power in an effort to knock off poor children for the oligarchy.

And if you think the previous sentence is an exaggeration, you've not been paying attention.

Now, Bash was able to effectively repel slander against her because of her background. For many Americans who are accused of bigotry because they have made an inopportune "OK" gesture or have sported a haircut that's "too short" or hold conservative ideological positions or support one of the two major political parties or use words such as "monkey" in the proximity of an African-American, there's no real defense. If the former legal clerk behind Kavanaugh whose fingers touched had been a 30-something white dude, it seems likely that we'd still be debating charges of his being a secret Klansman, destroying his reputation.

Even now, think of the juxtaposition in coverage. "Brett Kavanaugh avoids shaking hands with father of Parkland shooting victim" might be a factual headline, but it insinuates something completely untrue.

You'll remember that when some numskulls showed up at a Trump rally with "Q" signs (a conspiracy theory so convoluted I won't attempt to explain it, because I can't), it was blown into a national story, with many calling it a stark and undeniable reflection of the corrosion of conservatism. "A deranged conspiracy cult leaps from the Internet to the crowd at Trump's 'MAGA' tour," The Washington Post informed its readers.

Fair enough. On the other hand, the same Washington Post offered a piece spinelessly headlined "That was no white-power hand signal at the Kavanaugh hearing, Zina Bash's husband says," laden with qualifiers that explain the left's descent into madness (italics mine): "A few liberal-leaning accounts with large followings who do not work for traditional news media outlets had noticed that Bash had been making an 'okay' sign with her hand as it rested on her arm as she sat behind Kavanaugh at the hearing."

Well, the liberal-leaning blue-checked stars Seth Abramson, Amy Siskind, Eugene Gu, Eva Golinger and the Palmer Report each have hundreds of thousands of followers, reaching many millions of Americans. They are conspiracy-mongering in much the same way Alex Jones is conspiracy-mongering. We're talking about a significant number of people. The only difference is the treatment they receive from the media -- and from social media.

The paranoia that drives people who sport "Handmaid's Tale" bonnets or believe America is teeming with white nationalists is stoked, to some extent, by media that offer outsize attention to the few dozen sad neo-Nazi types who gather for protests and fringe hatemongering "candidates" who would be virtually anonymous otherwise. It is fueled by a political movement and pundits who inject race or sex into every single issue -- whether it belongs there or not. All of it, in many ways, merely diminishes and obfuscates the real problems we face with bigotry.

And with apologies to Chuck Todd, these dynamics in coverage work in only one direction. The Women's March, the heart of the resistance, is led by a bunch of conspiracy theorizing friends (or worse) of anti-Semites who, just like many other stars of the anti-Trump opposition, aren't afforded a fraction of the coverage. It doesn't mean that most liberals agree with these people. But it does show that irrational beliefs and ugly behavior aren't confined to any political party. This week's outbursts are just one example.