David Harsanyi
|
Posted: Apr 21, 2017 12:01 AM
Share   Tweet
The opinions expressed by columnists are their own and do not necessarily represent the views of Townhall.com. 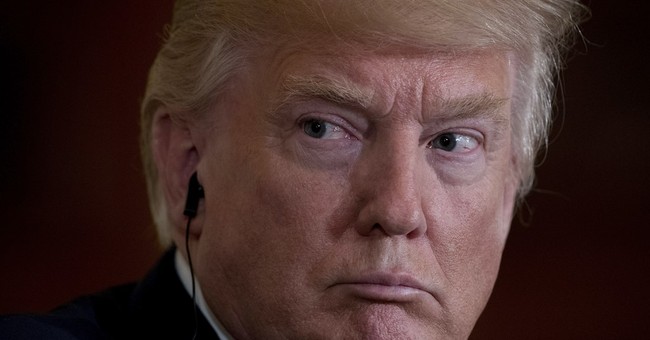 "We don't have a level playing field for our workers," President Donald Trump told a group of workers in Kenosha, Wisconsin, on Tuesday. Truth is, if we were to ever level the playing field with countries like Mexico and China, the average American worker would be making $3 an hour and spending their pittance on third-world health care and decrepit housing. Please, don't level the playing field.

When few things are going your way in politics, though, it's customary to return to rhetoric that made you successful. So, as Republicans have been unable to push forward on health care reform or tax reform -- or anything not named Neil Gorsuch, for that matter -- it is unsurprising that Trump would turn to protectionism as a way to bolster his political fortunes.

On Tuesday, the president traveled to a tool manufacturing company in Wisconsin and threw some nationalistic bromides at a blue-collar crowd (none of which included the words "I'm afraid some of your jobs will be taken by robots in the future"), and then signed an executive order ordering the White House to look into ways to curb guest worker visa programs and require government agencies to buy more goods and services from American companies.

For the past two years, over 200,000 foreigners applied for open positions each year. The U.S. Citizenship and Immigration Services holds a lottery and gives out 85,000 H-1B visas to high-skilled foreign workers. It's a program that's most popular with the tech industry, due to a shortage of Americans trained in science and engineering. I suppose it's a lot easier to stop talented immigrants from entering the country than to find ways to incentivize Americans to become math majors.

Over the past couple of decades, a high number of immigrants (which many H-1B visa holders become) have been part of innovations and start-ups that have created jobs for American workers. Now, even if you don't believe immigrants add economic value, how exactly is cutting down on high-tech visas going to help rehabilitate the economically depressed areas of the nation?

Moreover, it seems telling that many of those who are concerned about illegal immigration also seem intent on lowering numbers of legal and potentially high-achieving immigrants from entering the country. The underlying message is that there is a cultural problem, not merely an economic one. "When two-thirds or three-quarters of the CEOs in Silicon Valley are from South Asia or from Asia, I think ..." White House chief strategist Steve Bannon said not long ago in a jumbled explanation of economic nationalism, "a country is more than an economy. We're a civic society."

The second part of the order cuts down on waivers and exemptions to President Herbert Hoover's Buy American law. It instructs agencies to use American-made goods and services rather than saving taxpayer dollars or searching out the best deals they can. This is how we incentivize rent-seeking and cronyism. Until a couple of months ago, this is what Republicans used to call "picking winners and losers." If you thought General Motors shouldn't be bailed out because it couldn't compete in a global marketplace, why would you support a state-impelled "Buy American. Hire American" when it comes to steel, for example?

In a political sense, the idea of "Buy American. Hire American" is much like fighting climate change: a comforting government-prescribed solution that people embrace in theory but rarely in practice. In the protectionist's universe, everyone with a Samsung cellphone or a Toyota Camry (both the best-selling brands in their categories) would be a traitor to the American worker. In the real world, competition allows us to buy the best products at the cheapest prices -- and then buy more things with the money we save. The rules of economics don't give us waivers for being American.

How damaging will Trump's trade agenda be? Who knows? Despite the protestations of the left -- and their eight-year weakening of constitutional restrictions on executive power -- Trump's power has always been curbed by the realities of the job. But protectionism is one area where he could find willing partners in both parties.

Protectionism, after all, is where Trump is most comfortable and effective. It's the issue that made him, the issue he is most coherent about and the issue with which he has shown the most ideological affinity. Because of its political potency, it has also seen converts, not only among blue-collar Americans but also one-time free-market conservatives.

"Buy American," an appealing and patriotic-sounding solution, is popular across ideological lines. The protectionist impulses of the progressive left -- the Bernie Sanders and Elizabeth Warren wing -- closely align with Trump once the cultural aspects are stripped away. In American politics, both parties seem to have warmed to the idea that we can regulate the country into economic growth. The biggest risk is that protectionist rhetoric will be normalized within the GOP, which means there will be two parties with significant factions embracing mercantilism. How long will it be before that kind of support manifests in truly destructive legislation?