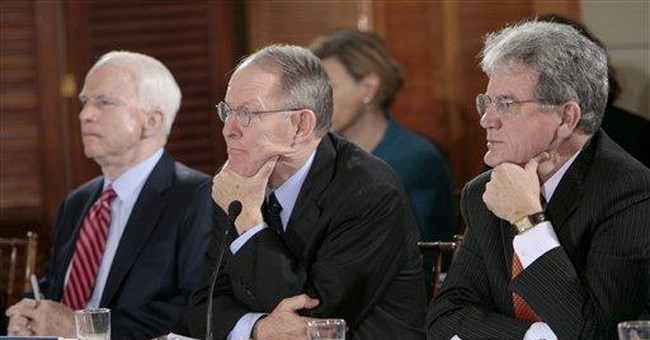 The first step in any recovery is accepting that you can't control your addictions. So though Republicans may stumble back into power, they should admit that they, like Democrats, probably can't be trusted to control themselves.

That's why it's nice to hear that four Senate Republicans -- Jim DeMint, Lindsey Graham, John McCain and Tom Coburn -- are moving forward with a balanced budget amendment that would require the federal government to spend no more than it takes in.

Election year posturing? Sure. But it can only help renew the call for more embedded self-control in Washington.

Spurred by curiosity, in fact, I recently revisited the Contract with America, and there are plenty of solid ideas in there -- albeit some in need of minor tweaking.

It makes no sense, for instance, for a balanced budget amendment to require government "to live under the same budget constraints as families and businesses."

That's what got us into this mess. Government already operates under our budget constraints. If the average family didn't take on debt, how on earth could it afford those Volts, sprawling lawns and sweet plasma TVs? The economy would shut down if we started balancing our budgets.

You don't want government acting like me. You need it to be accountable. The amendment should read: "Government should not, under any circumstance, live under the same budget constraints as families and businesses, because with a $3 trillion budget, it doesn't have to."

The amendment also would require a supermajority vote -- two-thirds of both houses -- to pass a tax hike. This seems a bit onerous, considering it takes a similar effort to declare war. America also would be hypnotized by how quickly taxes would turn into fees. So what about a 5 percent cap (plus inflation) on yearly spending increases? Anything above that level -- let's call it emergency spending -- would need a two-thirds majority vote.

There are other concepts worth revisiting from the original Contract with America.

Though I vigorously oppose the idea of term limits -- they limit my freedom to make mistakes more than once -- creating term limits for committee chairmen is a fantastic idea. Does anyone need a better example than Charles Rangel to understand how corruptive the power of the gavel can be?

And why not resurrect the idea of hiring a "major, independent auditing firm" to conduct a comprehensive audit of Congress (and the Fed) for waste, fraud and abuse? This would offer us a dispassionate cataloging of the mess -- not to mention create or save thousands of accounting jobs.

Most of all, one hopes that Republicans are laying genuine groundwork for a federal balanced budget amendment, which has failed by agonizingly slender margins on a number of occasions.

After decades of grousing from alternating parties about reckless spending, here's a chance to constrain Washington, whether it wants to be constrained or not.

Up to this point, most of the opposition to the proposal has been based on one argument: Republicans are a bunch of silly hypocrites for failing to pass this when they were in charge of both houses and the presidency -- and, need it be reiterated, were busy creating their own debt.

Which, of course, is only another strong argument to support the amendment.