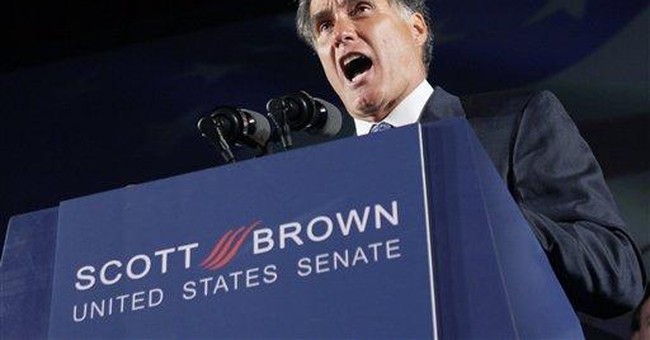 Mitt Romney not only possesses an air of real-world know-how but also has mucho smarts. I've been a reluctant apologist for him for years now.

And for those of you who believe he's out of touch with the proletariat, pick up his touching ode to the human spirit, "No Apology: The Case for American Greatness."

The book begins, "I hate to weed. I've hated it ever since my father put me to work weeding the garden at our home." And it only gets better.

Yet, notwithstanding his many attributes and my own nagging man crush, it has become evident that Romney's is a hopeless quest for the presidency.

It is possible to see -- if one dares to dream -- some authentic fiscal conservative emerging to take a shot at the presidency in 2012. Though Romney has the required drive, intellect and temperament, he is wrong on the fundamental ideological question of this time: health care.

In fact, Romney's illogical and unconvincing defense of his own health care plan not only is a deal breaker but also allows folks like White House press secretary Robert Gibbs to tell reporters that Obamacare is similar to a plan enacted (and still defended) by a leading Republican contender in 2012. And Gibbs is right.

Let's concede momentarily that the GOP will win back enough seats in 2010 to make it thornier for Democrats to push through any other comprehensive assaults on the economy. Let's concede also, then, that health care reform becomes the defining legislative accomplishment of Barack Obama's first term.

By 2012, many of the hidden costs of this reform will have surfaced, while the bulk of the alleged benefits still will not have kicked in. Barring some earth-shattering geopolitical event, candidate Romney will be impelled to spend a noteworthy chunk of his time pointing out differences and/or defending comparisons between the two plans -- effectively eliminating the issue that holds potentially the greatest impact for Republicans.

Unlike Hillary Clinton on Iraq or Romney's dad, George, on Vietnam, Mitt can't claim to have been brainwashed by The Man. Not anymore. In fact, when recently asked about it, Romney, according to The Boston Globe, offered "an enthusiastic defense."

"Overall, ours is a model that works," Romney explained. "We solved our problem at the state level. Like it or not, it was a state solution. Why is it that President Obama is stepping in and saying 'one size fits all'?"

Federalism is a good argument that has nothing to do with health care reform models, as Romney knows well. Here's what he should have said years ago:

"Everyone makes mistakes. Heck, I made a huge one. My plan, first hijacked by state liberals and now copied by Barack Obama, has created a fiscal nightmare in my state -- one that, according to the former Democratic treasurer, has forced us to cut back on other basic services.

"Though we promised an individual mandate would mean everyone would chip in, nearly 70 percent of the newly insured are subsidized by taxpayers -- with many paying nothing. Meanwhile, health care spending in our state is 27 percent higher than the national average, and we have a shortage of doctors, to boot. And that's just for starters.

"Let me be clear. I am not here to defend Romneycare. I am here to extract my name from that botched experiment by repealing its ugly stepson, Obamacare, so Americans work together to pass genuine, common-sense, market-based reform."

If that's the case, his position just doesn't cut it.