Can It Be? A Party for Capitalism? 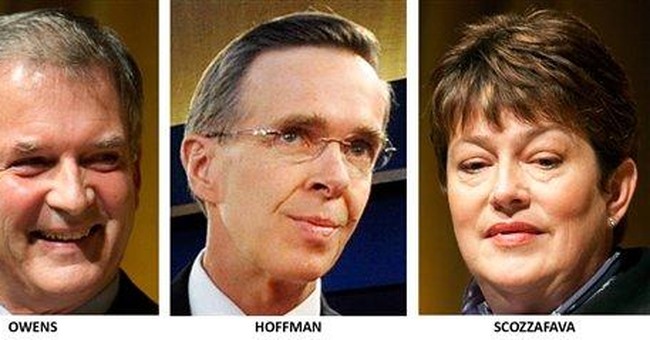 Naturally, a consensus will emerge:

The angry, hard-right, radical, insane (etc.) conservative base has hijacked the Republican Party and, in the process, further alienated a beleaguered nation -- a nation that apparently is hankering for tripling deficits and government takeovers of the health care, energy, banking and car industries.

Like Democrats, I, too, hope Republicans suffer. By focusing on needless culture wars, nurturing government centralization and growth, and spending without restraint, the GOP has downgraded fiscal conservatism to nothing more than election-time rhetoric over the past decade. And not surprisingly, Republican identification is also at an all-time low.

So how is it, some wonder, that a recent Gallup Poll claims that "conservative" remains the dominant ideological group in this nation -- with between 39 and 41 percent of voters identifying themselves as either "very conservative" or "conservative"?

The percentage of independents describing their views as "conservative" has also grown, to 35 percent from 29 percent in just one year.

What does it mean to be conservative these days? I mean, "conservative" happens to be the default self-identifying ideological designation of nearly every Republican politician (and some Democrats, too); so in Washington, at least, we know it means very little.

In the real world, I imagine many non-ideologically inclined voters tend to see themselves as conservative, as well. And with a president who has yet to meet an industry he doesn't believe needs to be managed by the loving but firm hands of Washington, this increasingly must mean fiscal conservatism.

The rise of free market populism in this country finally has manifested in an election. And judging from the hyperbolic reactions, you know it's a political movement with staying power.

When tepid, traditional conservative candidate Doug Hoffman knocked off liberal Republican Dede Scozzafava -- a candidate who was supported by nearly every boogeyman in the GOP handbook -- you might have thought that the rabble had stormed the Bastille.

Purging moderates is indeed a self-destructive strategy for any national party. But running a party without any litmus tests on the central issue of the economy seems to be similarly self-defeating.

The most impressive trick played by Rich and other liberals, though, is creating a narrative wherein the ones attempting to fundamentally reconfigure the American economy are cast as the moderates.

The nearly powerless who stand in their way? Well, they play the part of Stalinists.

Now, I'm not nearly as smart as Frank Rich, but I do know that the single ideological bond that holds together all factions of the right is a belief in capitalism and economic freedom. Or, at least, it should be.

In fact, as Arthur C. Brooks, American Enterprise Institute president, summed it up, "there is a major cultural schism developing in America. But it's not over abortion, same-sex marriage or home schooling, as important as these issues are. The new divide centers on free enterprise -- the principle at the core of American culture."

The next few elections will tell us whether this tenant of American culture has staying power -- and whether there will be a political party to champion it.