Hey, How About a "Private" Option? 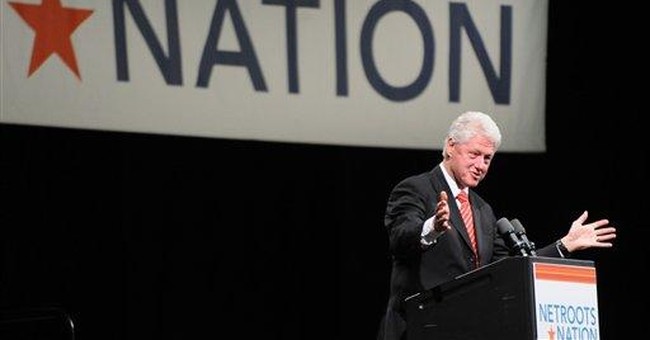 It's about time we conceded that proponents of the "public option" in health care reform have offered up a tremendously constructive idea.

In his pitch to the masses on health care, President Barack Obama said that a public option would "give people a broader range of choices and inject competition into the health care market ... and keep the insurance companies honest."

So let's agree, then, that the more we inject competition into a marketplace the more consumers benefit from lower prices and innovation. Consequently, there should be no problem infusing this open-minded brand of policymaking into an array of issues. You know, to keep everyone honest.

All one needs to do is employ the president's logic and it becomes patently obvious that the time is right for a "private option" in Social Security. This would free citizens to extract themselves from a failing program and pay into a private one that offers more than a 1 percent return (like a savings account or a tooth fairy, for instance). Seeing as injecting competition into markets is healthy and desirable and all that good stuff ... it should be painless.

How about those payroll taxes most of us pay to fund Medicare? Isn't it time that Washington instituted an opt-out clause so that future generations are able to select private options if they wish? This would bring down costs and raise accountability because, as the president so astutely points out, enhanced competition keeps shysters in line.

And what about those vulnerable children? If health care is "right," then education is sacred moral imperative. How could an enlightened society allow a "public" education monopoly to run our precious schools into the ground? Let's get moving on a private option by means of vouchers so parents -- or "victims," in this case -- can blunt the influence of "villainous" super-funded special interest groups, such as the National Education Association.

Sad to say, the present system simply doesn't meet Obama's free market criterion of offering a "broader range of choices." And as we all know, the status quo is unacceptable -- unless you hate children.

It's a question of morality, actually. Unions not only abuse the working stiff by underpaying high-performing employees and shielding low-performing employees but also "target" poor and inner-city kids by trapping them in failing schools and denying them the bright future that every American deserves.

This kind of transformational change would necessitate an ideological U-turn, considering Congress and the administration have been working to kill the successful vouchers program in Washington, D.C.

Then again, the entire "competition" argument is one gigantic rhetorical hoax.

It is fortuitous that the president decided to invoke the U.S. Postal Service this week when defending the public option, claiming, "If you think about it, UPS and FedEx are doing just fine, right? No, they are. It's the post office that's always having problems."

Actually, if you really think about it, the Postal Service holds a monopoly on first-class mail. Without that monopoly, it would not exist. But at least the post office pays its own way. The public option would not. It is not competition. It is the antithesis, a program designed to undercut markets, create artificial price controls and, inevitably, produce a single-payer plan.

How do we know all this talk of competitive markets is disingenuous? History. If the progressive left, which runs Washington today, truly believed in more market competition, the public would be able to point to a single illustration of the Obama administration or Democratic leadership "injecting" more free market activity into a government-run monopoly -- or anywhere else in the market, for that matter.

That's not the mission.