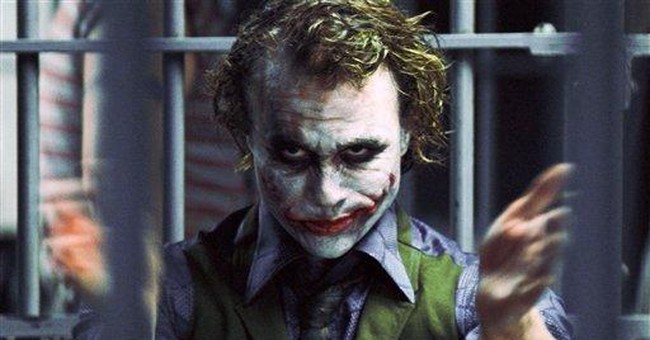 Yes, the Oscar nominations are here, and America simply can't afford to stand idly by anymore. Not after the Academy of Motion Picture Arts and Sciences had the audacity to claim misleadingly that Brad Pitt not only had engaged in acting this past year but also was among the finest to practice the craft.

Absurdity of such scope is one of the reasons the Oscars continue to lose viewers and hemorrhage influence. Sometimes it seems as if the Academy has a desire to disconnect from the average moviegoer. Last year's Oscars telecast, accordingly, logged the show's tiniest audience on record.

There seem to be a number of problems at play: The most talented actors often star in movies Americans don't care very much about, while the movies we do care about, all too often, feature Leonardo DiCaprio. This toxic formula has set our expectations to tragic lows.

In the '70s, audiences were treated to Oscar-worthy performances by names such as De Niro, Pacino, Nicholson and Hoffman, stars who regularly were involved in artistically meaningful films that also could draw crowds.

These days, conversely, there is a movement afoot to convince us that the unsettling dullness of a Jake Gyllenhaal or a Mark Wahlberg is deserving of Oscars rather than pubic scorn.

Moreover, for the past decade, we've allowed half-baked, predictable traumadies, such as "American Beauty" and "Crash," to masquerade as thoughtful pieces of societal commentary and win Oscars. (I mean, permitting Roberto Benigni to escape the country with an Oscar for "Life Is Beautiful" in 1998 was a crime against not only history but also art.)

During these dark days, the gap between what we watch and what we're told to watch has continued to widen. This year, in fact, even with the rise in ticket prices, the cumulative average box-office gross of the Best Picture nominees is at its lowest level in more than two decades.

In 2008, the top 10 movies at the box office consisted of five movies (the top four) that can be classified as (mostly brooding) superhero flicks: "The Dark Knight," "Iron Man," "Indiana Jones and the Kingdom of the Crystal Skull" (and it needs to be stressed that this movie was so tragically unentertaining that I feel as if a piece of my childhood was ripped from my soul), "Hancock" and "Quantum of Solace."

Four other movies in the top 10 were animated features, and one was a vampire movie. I have not seen all these films, but I am relatively certain most Americans rather would watch any of them -- even if they were shown in a continuous loop and overdubbed in Mandarin Chinese -- than sit through a single viewing of the Oscar-nominated English-accented picture "The Reader."

As a movie buff, my hope for Hollywood was renewed temporarily last year, when two great American films, "No Country for Old Men" and "There Will Be Blood," vied for Best Picture. Surely, Hollywood can make artistically relevant movies that the average moviegoer also can enjoy?

My hopes quickly were dashed when, this year, I realized the words "Sean" and "Penn" would mingle once again with the words "Academy" and "Award."

It often is pointed out that box-office numbers and quality are not tied to each other. That's for sure. But one glaring example of the disconnect between the Academy and the moviegoer is "The Dark Knight," the top-grossing movie of the year. Critically acclaimed, surely this movie held the artistic merits of, say, "Frost/Nixon"?

These days, every dollar counts. The Oscars should start to recognize worthy performances that American moviegoers actually have enjoyed. Some must exist.

Another constructive step would be to stop gratuitously praising Brad Pitt. It just encourages him.