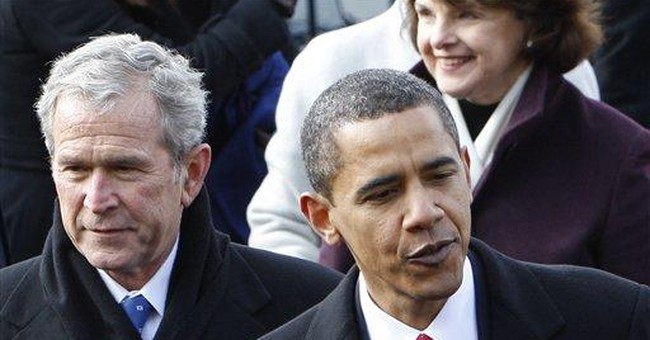 Do all Americans truly have a yearning to fundamentally "remake" our nation? There must be a subversive minority out there that still believes the United States, even with its imperfections and sporadic recessions, is, in context, still a wildly prosperous and free country worth preserving.

Some of you must still believe that politicians are meant to serve rather than be worshipped. And there must be someone out there who considers partisanship a healthy organic reflection of our differences rather than something to be surrendered in the name of so-called unity -- which is, after all, untenable, subjective and utterly counterproductive.

How about those who praised dissent for the past eight years?

Is there anyone who still believes the Constitution was created to ensure each citizen has liberty and the ability to pursue happiness rather than a guarantee of happiness -- and a retirement fund, health care, a job, an education, a house

Yes, two important historical events transpired Tuesday. The first was the peaceful transfer of power from one freely elected politician to another -- an uninterrupted streak we often take for granted. Then there was the first presidency of an African-American, which proves we can transcend our unsightly past.

After that, what we had was just another presidential election. We conduct one every four years. For those of you not shouting hosannas, it might have occurred to you that we are suffering from a rampant sickness in American life that casts government as the author of your dreams and an Illinois politician as the linchpin of your hopes.

Tom Brokaw -- whose hero, Franklin Delano Roosevelt, corralled thousands of innocent Asian-Americans into internment camps and assaulted the Constitution at every turn -- went as far as to compare Obama's inauguration to the Czech's fight for freedom over Communist oppression.

George W. Bush's administration, which I had a multitude of problems with, was not comparable to a tyranny, despite the protestations of his emotional detractors.

Liberals, rightly, recoil at the prospect of conservatives dictating which morals they should live by. Obama, though, has spent the past year preaching his own brand of morality -- with a list of demands. Everyone, you see, "must" sacrifice. As Michelle Obama recently explained, "Barack Obama will require you to work. Barack will never allow you to go back to your lives as usual, uninvolved, uninformed."

Those of us who refuse to buy left-wing orthodoxy will remain "uninformed" and, inevitably, "selfish."

To be fair, I'm uncertain what Obama is going to require of me during these next four to eight years. I do know, right off the bat, that if he passes his centerpiece trillion-dollar ideologically driven government expansion (in the guise of a "stimulus" plan), he will be demanding my grandchildren work overtime to pay it off. That's after they're done paying Bush's tab.

Obama challenges Americans to have "a willingness to find meaning in something greater than themselves." So if you find massive concentrated power in Washington a turn-on, you've found your higher purpose.

But surely, most of you found meaning in something greater than yourselves long before some politician demanded it.

To require such fealty to power in the name of patriotism was once repugnant to the left. Now, with the right guy in charge, apparently, it can be embraced once again.