Get Out of the Way, You Old Fogies 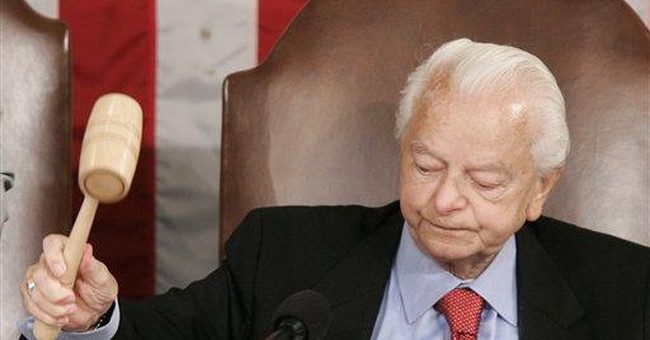 Warning: This column is replete with ageism, a hazardous prejudice to have in a nation growing progressively older.

The average American's life expectancy (or, as it's referred to in Washington, the "junior senator") is now a crusty 77 years of age.

The hippies told us not to trust anyone older than 30. What about 70? There are 22 senators who have reached this seasoned plateau; another four are 69. So despite the promise of impending "change," Washington, in reality, still resembles a (painfully slow-moving) gerontocracy.

When I drop dead excuse me, pass away, I expect to have a remote control and alcoholic beverage in hand, a white Cadillac out front, and a rigid belief that government owes me stuff. Politicians, it seems, only stop working to move into correctional facilities or pine boxes. Really, are they so exceptional we can't let them go?

Perhaps some of you will argue that as Washington begins negotiating a new New Deal, it is advantageous to have on hand more than a third of sitting Senate members with firsthand experience of the Great Depression.

According to USA Today, the average age of a House member this term will be 57. That is a day nursery compared with the Senate, in which the average age now stands at 63. Both are the records.

Thirty years after Ted Kennedy griped about Ronald Reagan's advanced age, the man serves as a 76-year-old nine-term senator recovering from brain tumor surgery. Really, is there no one else available in the state of Massachusetts who can drop his r's and vote dependably Maoist?

The average adult would not trust Sen. Robert Byrd (91) to pet-sit the family mutt for fear that the unfortunate creature might accidentally turn up in a chili con carne. Yet Byrd sits on the powerful Senate Appropriations Committee (where he doles out massive amounts of taxpayer funds for West Virginia landmarks with "Byrd" in the titles). Fortunately, this session, Byrd has lost his chairmanship to make way for a young whippersnapper in Daniel Inouye, 84, from Hawaii.

And sure, there has been some progress in the Senate with the ousting of Alaskan criminal Ted Stevens (85). The youth movement continued in the House with the ejection of 82-year-old John Dingell from his chairmanship of the House Energy and Commerce Committee to make way for Henry Waxman, who comes in at a stylish 69 years of age.

Then there are Supreme Court justices, who in many ways hold power beyond that of legislators. Certainly, the position entails a far higher level of intellectual rigor. The average age in that institution is 69. Five justices are older than 70, and another two are older than 60. Justice John Paul Stevens is 88 years old.

In 2004, 6 in 10 Americans believed that there should be a mandatory retirement age for Supreme Court justices -- probably because, like me, they often can't get their children's names straight, much less remember what the Third Amendment says (though in the end, we all stand united against the quartering of soldiers).

Many older Americans will claim to be sharper and more physically active in their 80s than I am in my 30s. That's not saying much. Our creaky leaders should understand that it is in our best interest as a nation for them to step aside and use their latter-life precocious enthusiasm and energy in the private sector.

Sadly, it seems these elderly public "servants" have an inability to allow national treasures -- themselves -- to stop giving.

Theoretically, it would be nice to allow citizens to vote for anyone they pleased -- young or old. But because we already have a minimum constitutionally mandated age limit to serve in place, why not a maximum age? How about placing it, at the very least, wherever the average life expectancy falls?

Because right now, Washington looks a lot more like Del Boca Vista than it does America.