Is the Iran Deal on the Rhode to Recovery?

David Grantham
|
Posted: May 13, 2016 12:01 AM
Share   Tweet
The opinions expressed by columnists are their own and do not necessarily represent the views of Townhall.com. 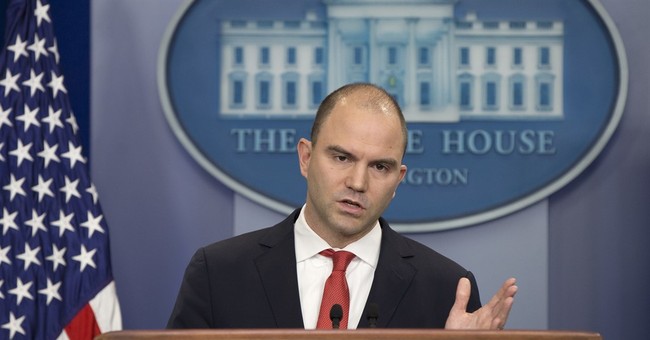 I always figured a breach in the seemingly impenetrable circle surrounding the administration and its puzzling national security solutions would be the result of loose lips, rather than revulsion at the troublesome ideas circulating therein. And now deputy national security adviser for strategic communications Ben Rhodes is trying to take back his words.

Most know by now his admission that the White House misled the public on the purpose of the deal, and acknowledged that many of his media “compadres” serve as palace guards for the Obama administration. But retrieving words once spoken is like trying to put toothpaste back in the tube. And now Congress needs to step in. The Senate should consider using the National Defense Authorization Act (NDAA) to protect the country and our allies from the administration’s “agreement” with Iran.

Apologists are trying to save face in the wake of these comments by attempting to rebrand the deal as a clumsy product of group think; or the hurried maturation of a bad idea in a space completely insulated from counter-arguments. An “echo chamber,” as Rhodes called it.

My father has a better term: group stupid. He correctly reasons that we do things in a group that we would never consider on our own.

In any case, group stupid now remains the most attractive excuse for this pitiful agreement, simply because critics will often extend grace to the hapless. After all, most observers recognize actions of group stupid to be reckless and impulsive, and if given a second chance, believe those involved would generally avoid the same course of action.

Rhodes’ comments, however, confirm that the Obama administration brokered the agreement with full knowledge of its terrible structure and unbalanced conditions, and then sold it as something else. That’s premeditation, not imprudence.

Rhodes has verified this deal to be as solid as a pinky swear with an Ayatollah missing both hands.

Congress can begin to fix it, here’s how.

The NDAA, the annual bill that sets the military budget, has arrived in the Senate. As part of funding our defense force, the Senate could also consider adding portions of proposed legislation as amendments to the NDAA to rectify this miserable pinky swear agreement.

First, the Senate could consider using excerpts from H.R. 3662 Iran Terror Finance Transparency Act, introduced by Rep. Steve Russell (R-Okla.), as an amendment. In one instance, the proposed bill legislates congressional authority wherein “Any rule to amend or otherwise alter a covered regulatory provision regarding sanctions on Iran shall be subject to congressional review requirements.” In other words, this statue prevents the executive branch from unilaterally and arbitrarily applying or rescinding sanctions. This would curb the excesses of an otherwise emboldened executive branch and limit future administrations who harbor similar ambitions.

Congress could also consider including excerpts from of H.R. 4342 Iran Ballistic Missile Prevention and Sanctions Act introduced by Rep. John Delaney (D-Md.), as another amendment as a means of penalizing Iran for its missile tests.

Indeed, as one can see, the Iran issue has bipartisan support. Adding amendments of this nature could find backing across party lines. And the American people would love to see such compromise, especially on an issue in which they so stringently disagree with the administration.

The Rhode to accountability starts with the NDAA.

The NCPA is proposing a viable course to achieve a fiscally responsible military that will keep America safe. Join us in this endeavor as we focus on the FY 2017 National Defense Authorization Act at NCPA.org and our Provide for the Common Defense Now! Petition.