A New War Strategy Must Start With Congress 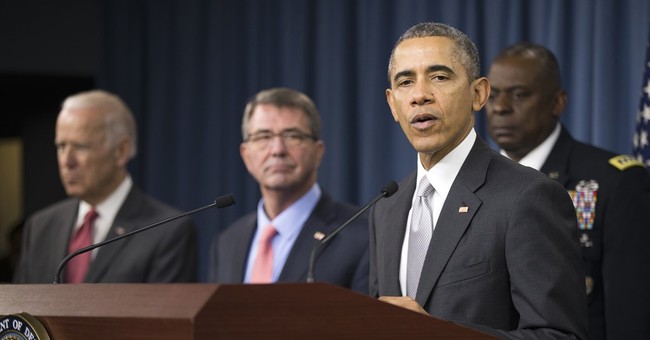 As Secretary of Defense Ash Carter meets with U.S. commanders on the ground in the Middle East, President Obama holds fast to his tactically disjointed war plan against the Islamic State. The president tried to demonstrate his resolve at the Pentagon on Monday by reading a laundry list of underwhelming achievements, all intended to highlight the success of the president’s containment approach. But the Islamic State used the last three months to spearhead and inspire attacks in Turkey, Paris and California killing at least 240 people. So the additional information only confirmed that any triumphs in the region have yet to curb ISIS activity outside of it. The speech offered no recognition of that reality. Even the president’s former terrorism adviser, David Vickers, recently pleaded for a change in strategy. Yet the second speech on ISIS in eight days only proved that setbacks would not deter the administration from its unabashed commitment to a controlled, tit-for-tat style of warfare. From gradual deployment of Special Forces to environmentally-friendly bombing campaigns, the administration’s ideas will remain stuck in a closed loop of miserably ineffective strategies. Therefore, Congress must act. The country cannot wait for an administration that has refused to execute a comprehensive national security strategy.

The Pentagon address verified the president’s hesitancy towards exercising American leadership. From the questionable Iran nuclear deal to acquiescing to Russia’s move into Syria, the president appears reluctant to adopt strategies that might give the appearance of excessive American power; presumably to earn the approval international onlookers. After all, he has more than once deemed a national security policy unproductive because it supposedly harmed America’s global reputation. But self-restraint has blindfolded the administration to the threat posed by a host of bad actors indifferent to U.S. policy. And now Americans are exposed to enormous, unnecessary risk.

The president’s prioritization of reputation over action helps explain the otherwise puzzling attitude toward the Islamic State. The strange jayvee squad comment. Rationalizing ISIS atrocities as another example of religious misadventures; the crusades being his favorite comparison. The president went as far as characterizing ISIS’ barbarism as partly the result of inadequate employment opportunities, as if grown men who kidnap young girls to be sex slaves and behead innocent civilians are simply those down-your-luck John Does who have succumbed to the natural impulses of a frustrated job-seeker.

Likely aware of how bizarre these comments sounded, the president moved toward a more scholarly, sensible explanation. He assured everyone that the Islamic State represented an isolated and perverted version of Islam. No need for disproportionate military force. But the American people watched as Boko Haram slaughtered people in Africa under similar interpretations. Abu Sayyaf did the same in the Philippines. In fact, the leader of ISIS has a Ph.D. in Islamic Studies. Some of the kindest, gentlest souls I know are Muslim. But the president spoke as if he alone just settled Islam’s longstanding, internal dispute over the correct interpretation of jihad.

Then Paris happened. San Bernardino followed. When new circumstances demanded the commander-in-chief reassure a jittery American public, he could only bring himself to speak at his audience. He finally acknowledged what Andrew McCarthy calls the “nexus between Muslim doctrine and Muslim terror,” but then he quickly leveled the playing field by demanding tolerance from his listeners. He warned his countrymen against giving into “fear,” as if millions of unhinged Americans lay in wait for the right moment to strike out against innocent bystanders. It seemed lost on the president that he serves to protect us, not protect us from ourselves.

He insisted on self-reflection from his audience; he demanded action from Congress. But he required nothing from himself. His Pentagon speech days later only confirmed an unwillingness to break from his own ideas. The well-established pattern of rationalizing the threat rather than stopping it has made the president, to borrow from Peggy Noonan, “amazingly, barely relevant.” Therefore, Congress must take the lead.

In November, Congress proved capable of rising above the rancor for the sake of national security by passing the National Defense Authorization Act (NDAA) with veto-proof majorities in both chambers. The president only affirmed his growing irrelevance by threatening executive action because the most bipartisan legislation in recent memory passed with a provision that prohibited moving Guantanamo detainees to the United States. Congress stood unfazed, as they should.

Now both chambers should rally around this success and use it as a precursor to a comprehensive, bipartisan strategy that reimagines the use of America’s national security resources. In particular, Congress should use its power of the purse to redirect domestic and international security spending away from weather-related programs and social engineering projects, and toward our current war with the Islamic State.

While ISIS plots, the president restrains America’s capabilities in hopes of earning the approval of foreign observers. Congress must take the lead. America cannot spend time competing for the admiration of its own president.