David Davenport is counselor to the director for external relations and a research fellow at the Hoover Institution. He specializes in international law and treaties, constitutional federalism, and American politics and law.

Davenport is the former president of Pepperdine University (1985–2000). Under his leadership of Pepperdine, the university experienced significant growth in quality and reputation. Davenport cochairs Common Sense California, which is a bipartisan effort to reengage citizens and bring their pragmatic solutions to some of the state’s most pressing problems. He was also a member of Governor Schwarzenegger’s California Performance Review Commission. Davenport is a member of three corporate boards: Ameron International, Forest Lawn, and Salem Communications.

His work on policy appears in a number of places, including regular radio commentaries on the Salem Radio Network and Townhall.com, as well as frequent newspaper columns in the San Francisco Chronicle. He has contributed chapters to Hoover books on values in a free society and legal threats to American values. He has also authored articles in Policy Review on “The New Diplomacy” and “The Politics of Literacy.” Davenport is a popular public speaker, currently serving as a world affairs lecturer for Crystal Cruises.

Davenport earned a B.A. with distinction in international relations from Stanford University and a J.D. from the University of Kansas School of Law, where he was elected to Order of the Coif and earned national and international awards in moot court competitions.

Hard Questions for Holder
By David Davenport
It's been a rough few months for Attorney General Eric H. Holder Jr., and he should face more tough questioning ...
March 19, 2010

The DOJ9 (And Still Counting)
By David Davenport
With health care dominating the headlines, it was easy to miss the unfolding drama between Congress and the Obama administration ...
March 01, 2010 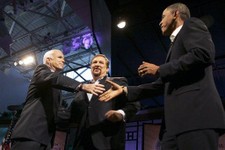