House Leadership Takes Suicidal Stand Against Its African-American Base 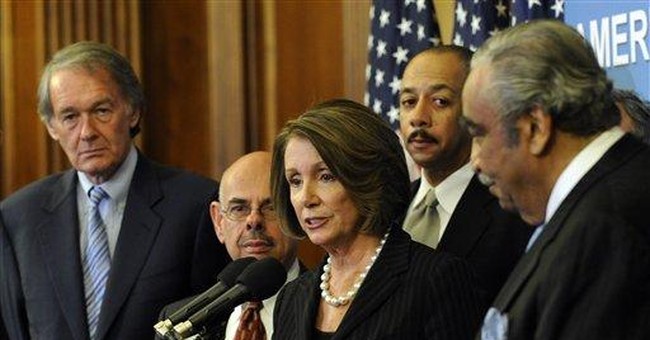 Overly influenced by certain big-name green groups, misled by their own ideology and perhaps also a bit dazzled by the unlikely stardom of failed-politician-turned-climate-hero Al Gore, Democrats on Capitol Hill seem bent on self-destruction when it comes to climate change.

At issue is palatable opposition to continuing plans for expensive and job-killing cap-and-trade legislation among members of the Democratic Party's most loyal core constituency: African-Americans.

Yet despite the association of the climate change issue with the Democratic Party and President Barack Obama -- who, according to a CNN/Essence Magazine/Opinion Research Corp. poll released June 25, still receives the support of 96 percent of the African-American community -- black Americans leave the fold in droves when it comes to climate change.

Among the poll's findings:

- 76% of African-Americans want Congress to make economic recovery its top priority, even if it delays action on climate change;

- 56% believe Washington policymakers have failed to adequately take into account the economic and quality of life concerns of the African-American community when formulating climate change policy;

- African-Americans are virtually deadlocked on whether to proceed with plans to reduce greenhouse gas emissions if doing so increases consumer prices and unemployment. 44% of those surveyed said emissions reductions should not proceed under these circumstances, while 45% said they should continue. Significantly, a strong majority (59% to 33%) of those surveyed in the West North Central Region (Iowa, Minnesota, Missouri, and Nebraska) and a plurality (43% to 42%) of those in the East Central Region (Illinois, Indiana, Michigan, Ohio, Wisconsin) opposed emissions reductions if they increase costs or unemployment.

With concern about a Waxman-Markey-style climate change bill running this high among a group of predominantly Obama voters, it's bound to be much higher among the general population, despite what leading Democrats have chosen to believe.

For most Americans, James Carville's old slogan for Bill Clinton's 1992 presidential race, "It's the economy, stupid," remains as much in effect as ever.

Yet the Democratic leadership remains staunchly and energetically behind the Waxman-Markey climate bill, which, the Heritage Foundation's Center for Data Analysis determined, would reduce aggregate GDP by $7.4 trillion, kill 844,000 jobs and raise the energy bill paid by a typical family by about $1,500 annually.

The climate legislation isn't just semi-suicidal for the economy; it could be for the Democratic leadership in Congress as well.

African-Americans have expressed frustration for years that the Democratic Party takes them for granted. When poll results among a group of overwhelmingly pro-Democrat voters are 76 percent in favor of putting the economy first on a very high-profile issue, and the Democrat leadership chooses to ignore them, who is likely to suffer the most in the end?

Barack Obama himself may escape much of the blame; he is, after all, the first African-American president, and he has (no doubt intentionally) kept his profile low on this bill. But will Nancy Pelosi and the predominately white Democrat leadership be so lucky?