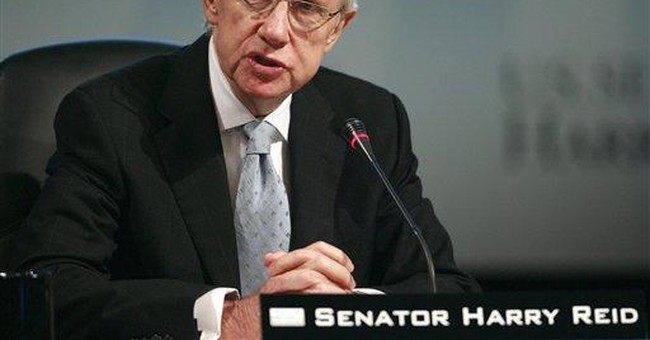 Today Senator Reid is holding a teleconference where he will accept screened questions from selected constituents. It’s unfortunate that Senator Reid has declined to hold even a single public town hall for his constituents on the principal reform issue of our day, instead ducking debate and calling constituents who oppose his far-reaching agenda names such as “evil-mongers” and “phonies.”

Since Senator Reid declined to hold a public forum, on August 20th, I took the initiative and held an open town hall on health care reform in Las Vegas - without screening attendees. In fact, about 20 percent of the audience members were open supporters of Harry Reid and they asked me some tough questions.

Yesterday I registered for Senator Reid’s teleconference, but since I’m unlikely to be chosen to participate, here are five questions I think Nevadans should ask Senator Reid if they are one of the very few to get through his screeners.

My first question is prompted by my memory of one woman at my own town hall who threw up her hands and asked, “I don’t want a government plan. Why can’t I just keep the health care I have?”

So here’s my question on her behalf:

1. Senator Reid, will you pledge today to sign up personally for a "public option" health plan, if it becomes law?

Perhaps the strongest argument against Senator Reid’s “public option” healthcare plan is that members of Congress keep exempting themselves from it. When Congressman Dean Heller (R – Nevada) offered an amendment last month to require members of Congress to “enroll in any new government-run healthcare system,” members of the House Ways and Means Committee killed it.

It is easy to see why American and even members of Congress want no part of this plan. This “public option” is the sort of government-run system that traps so many Canadians and Britons. They face the frightening reality that 46 percent of British breast cancer patients die from their disease, versus just 25 percent in America, and that prostate cancer is fatal in 57 percent of Britain’s patients, rather than just 19 percent here. In Canada, only 5 percent of the population has had colonoscopies, compared to 30 percent in America.

2. Senator Reid, you claim you support expanding Nevadans’ health care choices, so why did you vote to kill Medical Savings Accounts, which would have done exactly that?

Senator Reid’s health care plan does nothing to promote individual health-plan ownership, so it’s not surprising that in 1996, he voted against the creation of Medical Savings Accounts, so Americans could accumulate their own money to take care of themselves. In 1999, he voted against a measure, which the Senate then adopted, to let the self-employed fully deduct their health-insurance payments. Senator Reid consistently fights to keep Uncle Sam in charge.

In contrast, my vision for a 21st Century healthcare system is based primarily on individual choice and ownership. Americans should be able to control and carry their coverage throughout their careers, just as they do life insurance or home insurance, rather than rely on either government or their employers for health coverage. We should allow Americans to purchase health insurance across state lines — rather than only within their own locales. Let’s also extend COBRA coverage for those who want it.

3. Senator Reid, the White House just announced that the 2010 through 2019 budget deficit will increase by $2 trillion to a total of $9 trillion. With these staggering sums rising, where will we get the money to fund this $1.1 trillion health care plan?

No matter how much Senator Reid talks about cost savings, the truth is that Senator Reid’s healthcare plan strides mightily toward even bigger government. The Congressional Budget Office estimates that this program will cost about $1.1 trillion in its first 10 years alone. The Treasury is already depleted after Washington spent or promised roughly $13 trillion on countless bailouts.

The principal health care legislation, H.R. 3200 is 1,017 pages long. It features a costly menu of 53 brand-new federal agencies, panels, and programs. Including the National Medical Device Registry, the Health Choice Administration Commissioner, and the Program of Administrative Simplification. One Senate draft offers 29 initiatives and new entities, including the ominously-titled “National Oral Health Surveillance System.” With all these costly new bureaucracies, it is no wonder rationing occurs in every major country where the government dominates health care.

4. Senator Reid, your political strategy for passing reforms includes demonizing citizens as special interest mouthpieces, but you have taken over $1.3 million in campaign contributions from trial lawyers. Why won’t you propose real tort reform to reduce health care litigation costs?

I firmly believe that if we want to reduce costs, tort reform must be central to health reform. No one begrudges legitimate relief for people who genuinely suffer medical malpractice. However, we should reasonably limit non-economic damages, as California, Nevada, and Texas already do.

Here is my last question and it is an invitation I intend to pursue:

5. “Senator Reid, the people of Nevada deserve a healthy, open debate on these issues. Will you publicly debate Danny Tarkanian on your health care plan?”

Nevadans, stay tuned for his answer.