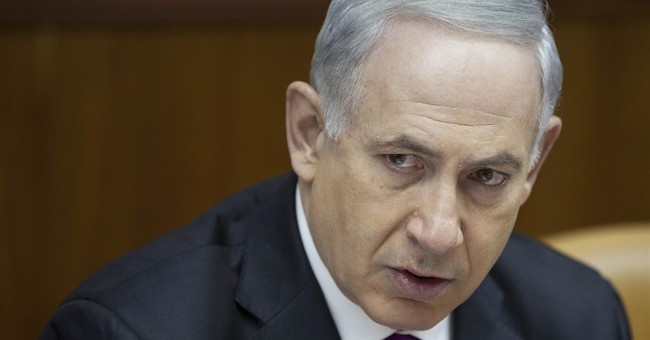 With Syria and Egypt aflame, why is U.S. Secretary of State John Kerry returning to the Middle East for his sixth visit since February to focus on more Israeli-Palestinian shuttle diplomacy?

In part, because he and other liberals think that the Arab and Iranian (and now Turkish?) war on Israel boils down to an Israel-Palestinian conflict and therefore they over-emphasize this dimension; in part, too, because he subscribes to the liberal illusion that Israel-related issues constitute the "epicenter" of the region (as James L. Jones, then Obama's national security adviser, once put it), so their resolution must precede dealing with other Middle Eastern problems.

But there's another possible reason for Kerry's enthusiasm: he took the measure of Israel's Prime Minister Binyamin Netanyahu and found him indeed serious about reaching an accord with the Palestinians, and not just pretending enthusiasm to please Washington.

This, anyway, is the thesis of David M. Weinberg of Bar-Ilan University writing in Israel Hayom: "Netanyahu has been making uncharacteristically passionate statements about the diplomatic process; statements that go beyond the expected chatter about Israel's desire to engage the Palestinians and negotiate a two-state solution." Weinberg finds Netanyahu "desperate for diplomatic movement[, having] bought into the left-wing argument that the status quo is unsustainable." Weinberg perceives preparations now underway for "a unilateral Israeli initiative to concede significant parts of Judea and Samaria."

Why should Netanyahu, who emphatically did not campaign on this platform, make such plans? Weinberg looks mainly to domestic politics:

Netanyahu has no other national agenda item to sustain his prime ministership. He needs a new message that will reposition him as a leader in the public mind, and the Palestinian issue is all he's got to work with. The lead on economic and social matters has been grabbed by [political competitors Yair] Lapid and [Naftali] Bennett. There's little Netanyahu can do about the hot situation in Syria or Iran. His job is to react wisely and cautiously to developments on these fronts, not lead Israel into confrontation.

A unilateral Israeli withdrawal, Weinberg notes, "would blow the Lapid-Bennett alliance out of the water—something which is Netanyahu's highest political priority." The prime minister would then "bask in the glow of praise of Washington and Tel Aviv elites," pick up center- and left-electoral support, and presumably coast to another electoral victory.

This explanation does not convince me: Iran poses a potentially existential threat to Israel and coping with it quite suffices to "sustain his prime ministership." The Israeli public is focused on Tehran, not Ramallah, and Netanyahu, who boasts that he spends 70 percent of his time on security issues, hardly needs diplomacy with Mahmoud Abbas to prove his leadership.

Rather, his motives probably lie elsewhere: like other prime ministers of Israel, Netanyahu suffers from what I have dubbed the "Ben-Gurion complex," a desire to go down in Jewish history as a renowned leader. (David Ben-Gurion oversaw the founding of modern Israel). In his third term and (after Ben-Gurion himself) the country's second-longest serving prime minister, Netanyahu is all the more susceptible to this aspiration.

Post-1948, the Ben-Gurion complex translates into ending the external threats to Israel. Unfortunately, this worthy ambition has inspired repeated duplicity and distortion. As I described the phenomenon in 2004, "First, every elected prime minister [since 1992, being Yitzhak Rabin, Ehud Barak, Ariel Sharon, and Netanyahu] has broken his word on how he would deal with the Arabs. Second, each one of them has adopted an unexpectedly concessionary approach."

Netanyahu made a campaign promise in 1996 that, were he in charge, Israel "will never descend from the Golan"; but a mere two years later he tried to offer Damascus the entire Golan territory in return for a mere slip of paper. (Had Netanyahu succeeded then, imagine the consequences today, what with Syria aflame and Al-Qaeda units approaching Israel's borders.) Fortunately, his cabinet colleagues obstructed him from implementing this folly.

These days, a center-left consensus intones that eliminating the external threat to Israel requires a two-state deal with the Palestinians. (I disagree.) Will Netanyahu turn to the left, defy his constituency and sign such an accord to win re-election? The pattern of wayward prime ministers plus Netanyahu's biography have caused me since 2009 to worry about such a betrayal of his mandate.

But perhaps we will be spared from learning an answer: Palestinian intransigence is annoying Kerry and might, yet again, take the diplomatic pressure off Israel.

CNN Hosts Deliver an Unbelievable Commentary About the Ohio Shooting...And It's Totally Rational
Matt Vespa
D.C. Statehood Passes House as Democrats Continue Attempts to Rig America in Their Favor
Spencer Brown
Another Democrat-Controlled City Is Having Problems Recruiting People to Join Its Police Force
Julio Rosas
Surprise: NY Dems Who Called for Cuomo to Step Down Now Appearing with Him, Open to Endorsement
Guy Benson
Caught Red-Handed: NBC News Busted for Editing Out a Crucial Detail in the 911 Call of the Ohio Shooting
Matt Vespa
Ted Cruz Warns Against Democrats' Attempt to 'Rig the Game' with Court Packing
Reagan McCarthy