A Challenge to the GOP from Bernie Sanders: Put Up or Shut Up on Capitalism 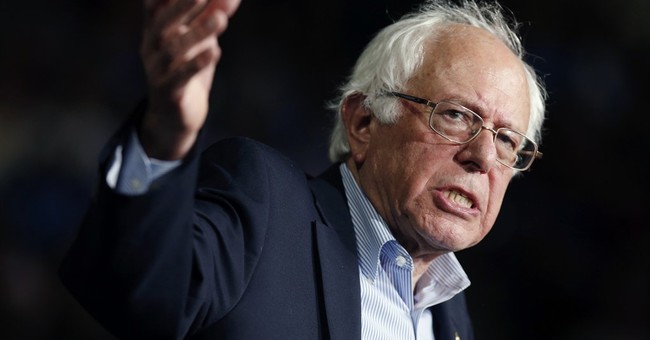 While his policy ideas are horrifying, Bernie Sanders’ campaign is the source of some amusement.

He claims to represent a different vision, but his voting record according to the National Taxpayers Union is virtually identical to the ratings received by Barack Obama and Hillary Clinton when they were in the Senate.

He’s not even a real socialist, at least if we usethe technical definition of this poisonous ideology, which is based on government ownership of the means of production. That being said, Democratic operatives such as Congresswoman Debbie Wasserman Schultzsound like fools on TV because they don’t even know the difference between genuine socialism and big-government redistributionism.

But I will give Sanders credit for his recent challenge to Republicans. He was being badgered about his supposed socialist orientation on a political news show and he turned the question on its head and asked whether Republicans would be willing to identify as being pro-capitalist.

Here’s an excerpt from a report in The Hill.

Sen. Bernie Sanders (I-Vt.) says he’s tired of questions about whether he’s a socialist, asking why more people don’t want Republicans to defend themselves as capitalists. “Look, when one of your Republican colleagues gets on the show, do you say, ‘Are you a capitalist?’” the Democratic presidential candidate said on NBC’s “Meet the Press” on Sunday. “Have you ever referred to them as capitalists?”

I think this is a good idea.

I’d like every single GOP candidate to be asked some version of Sanders’ question.

And if any of them displayed the slightest hesitation before offering a loud and unapologetic “yes” in support of capitalism, that would be a very good indication that they shouldn’t be trusted anywhere close to the Oval Office.

After all, how could anyone support big government over markets after watching these videos narrated by Don Boudreaux, Walter Williams, and Deirdre McCloskey?

Or how could anyone pick socialism (or any other form of coercive statism) after reviewing how market-based economies out-perform big-government economies?

Heck, I repeatedly ask my left-wing friends to identify just one big-government success story. I don’t ask for 10 nations that prospered with large governments. I don’t ask for five countries that might be considered successful examples of statist prosperity.

I just plead with them to give me one case study. And the only response is chirping crickets. Why? Because no nation has ever become rich during an era of big government.

So if any Republican candidate showed the slightest hesitation before extolling the glories of free markets, that person should be booed off the stage.

By the way, I can’t resist commenting on one other part of the story in The Hill about Sanders. The Vermont Senator apparently was asked to identify nations that are role models.

Did he list North Korea and Cuba, countries that actually still have genuine socialism?

Did he list Venezuela or China, countries that have partial government ownership of the means of production?

Instead he picked Denmark and Sweden.

The senator said he admires the social programs in nations like Denmark and Sweden, and he thinks “we can look to those countries” for guidance.

Since both those countries still have large welfare states with high tax rates and lots of redistribution, his answer is somewhat understandable.

But what about government ownership of the means of production and control over the allocation of resources? In addition to having big governments, is there a lot of intervention in markets?

Hardly. Indeed, if you take the data from Economic Freedom of the World and remove the fiscal policy variable (and thus measure the degree to which markets are allowed to operate), then Denmark and Sweden are both among the world’s top-10 nations for free markets.

And both rank above the United States!

So we have two nations that are more free market than America while also having bigger government than America. I’m not sure how to characterize this so-called Nordic Model, but it’s definitely not socialism.

The bottom line, though, is that you get the most growth when you have both free markets and small government. In other words, genuine capitalism.

That’s obviously not the agenda of Bernie Sanders, though I hope Republicans will be forced to answer his question and tell us whether they favor capitalism.