Daniel DePetris
|
Posted: Sep 26, 2018 2:27 PM
Share   Tweet
The opinions expressed by columnists are their own and do not necessarily represent the views of Townhall.com. 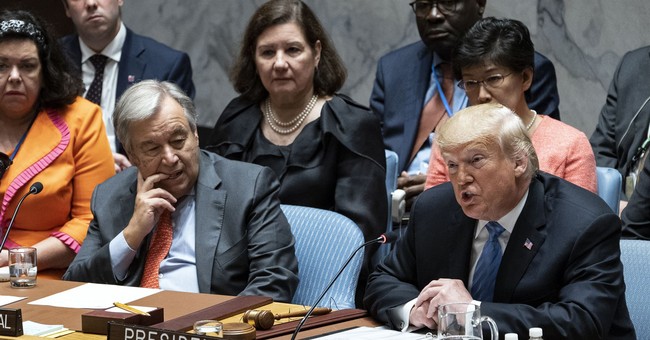 There was a lot to like and plenty to question in President Trump’s second address to the United Nations General Assembly on Tuesday, much of which will likely get lost to the media’s obsession with the flare, pomp, and circumstance of the annual event in New York.

Speeches in the U.N. chamber have historically been a time for world leaders to pine for global peace and reiterate the importance and value of multilateral institutions. Trump, however, used his time to convey a few hard truths to his fellow leaders.

First, the president reminded the audience that while the United States is a proud and resilient democracy that will always lead by example and stand up for individual liberty, personal freedom, and responsive governance, it is out of the business of imposing those principles under the barrel of a gun.   Past experience, from Iraq and Libya to Afghanistan, have demonstrated what a baseless and naïve fallacy this democratization-by-military force paradigm has become, one that has ushered in anarchy over the very democratic cause Washington champions.

Trump’s words were an acknowledgement that the U.S. can still run the diplomatic tables regardless of whether a country happens to be a democracy, a monarchy or an autocracy. The business of international diplomacy cannot stop, and in many cases it is imperative to work with less-than-savory characters and governments if it means getting a deal done for the national interest. Democracy, monarchy, or autocracy, America must operate in a world as it is.

Trump’s observation is also a reflection of where the American people stand at the present moment. Americans, to put it kindly, are rightly uninterested in dictating to the rest of the world what political systems they should have, how their state bureaucracies should run, and how much time and money they should spend on internal political priorities.

The U.S. must focus on issues most vital to U.S. national security—it should avoid foreign meddling in relatively minor or trivial internal matters. When a 43 percent plurality of Americans believe the last 20 years of U.S. foreign policy has made the country less safe, the citizens who fund the government expect their leaders to set priorities and spend hard-earned taxpayer dollars on necessary, achievable objectives which directly benefit American security and prosperity.

While Trump’s kind words for North Korean leader Kim Jong-un will undoubtedly stir controversy, the president was smart to talk-up his diplomatic initiative in the speech. Yes, Pyongyang remains a nuclear weapons power. And yes, the concessions Kim Jong-un has offered to date—closing down a missile test site, hinting about a closure of its main plutonium production facility, and ceasing missile and nuclear tests—are all reversible and short of the denuclearization gold standard. None of this, however, changes the fact that the general atmosphere on the Korean Peninsula is far better today than it was even nine months ago, when a catastrophic armed conflict was more than mere speculation.

A detente on the Korean Peninsula should not be undersold as an accomplishment or explained away as an insignificant development. Ultimately, sustainable peace and prosperity in East Asia are paramount to denuclearization, an objective that will only occur years into the future (if it occurs at all). Peace makes denuclearization more possible, and while much of Washington refuses to accept it, Trump seems to recognize this reality.

The president’s tenor was highly nationalist and skeptical of global institutions, so much so that you could see the terror on some of the delegates’ faces. But Trump has the right idea, even if his delivery was a bit blustery—all nations, America’s allies and partners included, must begin to devote more of their economic resources toward their own national defense.

Trump’s call for leaders to respect the sovereignty of their own states by taking their defense seriously and not relying on the U.S. military to bail them out in a crisis is a legitimate point to make and one previous presidents have made for years without much success. The Europeans are beginning to increase their defense budgets to address the new reality in front of them, the discrepancy between what the United States contributes and what its others contribute is both unacceptable and raises suggestions of its willingness to become an effective and capable partner..Trump must continue to stress the burden sharing theme during his public and private meetings, both for the health of America’s wallet and for the effectiveness of the West’s security institutions.

However, Trump’s address showed he remains convinced of the misguided notion that trade wars and tariffs will eventually produce more equitable trading relationships for the United States (China has yet to buy into the logic). He gave Iran way too much credit, inflating Tehran from the much-maligned menace it is in the region to a potential hegemon—rhetoric unjustified by its hard and soft power and its corruption-infected economy (at $439 billion, Iran’s GDP is behind Saudi Arabia’s $683 billion and a drop in the bucket to America’s $18 trillion).

Overall, however, the president successfully sent a message most Americans outside Washington will sympathize with: The U.S. is still the most powerful country on the planet, but it can only keep that title if its power is not overextended. The United States is prosperous, but it cannot afford to forget about what’s most important: seeking mutually beneficial engagement with all nations when necessary, setting realistic defense priorities that elevate the safety of the American people, defending our way of life, and promoting our economic prosperity above an obsession with the “liberal order.”