Daniel DePetris
|
Posted: May 01, 2018 12:01 AM
Share   Tweet
The opinions expressed by columnists are their own and do not necessarily represent the views of Townhall.com. 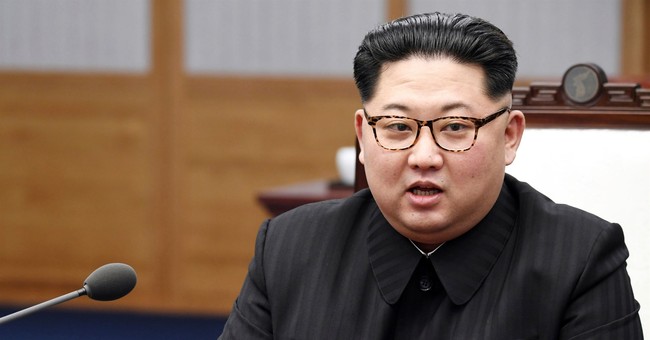 The last four months have been a whirlwind of diplomatic intrigue and activity on the Korean Peninsula, with dangerous talk about a preventive, “bloody-nose” military strike on Pyongyang’s nuclear facilities being overshadowed by talk about an upcoming bilateral U.S.-North Korean summit. The North Korea file has gone from what seemed like the precipice of war to the precipice of some kind of peace.

Last Friday, Kim Jong-un buttressed this emerging narrative by declaring a unilateral moratorium on nuclear and intercontinental ballistic missile tests and the closure of the Punggye-ri nuclear test site in the north of the country. The news media reported on the announcement as a major and historic diplomatic concession by the North Korean regime on the eve of the meeting between Kim and President Trump. In one of the more grandiose reports after the dictator’s statement, CNN’s Wil Ripley referred to the latest news as, “a new chapter for the DPRK.” Kim, Ripley remarked, “has committed himself to the path of denuclearization and will now focus solely on economic growth and the national economy.”

But is Kim Jong-un really on a glide path to denuclearizing his regime? Hardly. Before we start making bold pronouncements, a little reality—and yes, a little pessimism—is in order.

First, there is the matter of Kim’s actual statement, where the word “denuclearization” was not included once in the text. While Kim did indeed state unequivocally that nuclear and ICBM tests would no longer occur for the foreseeable future, the tone and tenor of Kim’s press release was far different from what western media outlets have reported. Kim explained the moratorium as the logical next-step on the road to a fully operational nuclear weapons program, not as a concession to the United States before comprehensive negotiations over his nuclear program begin. As Adam Mount and Ankita Panda assessed in the Atlantic, Kim’s words are more reflective of a nuclear-armed state confident in its capabilities and comfortable with the trajectory of its program than a government on the path to making history and eliminating its life insurance policy.

Secondly, the Trump administration needs to recognize just how insignificant a test freeze truly is. Politically speaking, suspending test launches, particularly of ballistic missiles that could potentially reach the continental United States, is a positive step that gives Washington slightly more time. It is important to note, however, that because the step is unilateral, it is also temporary; what Pyongyang gives (in this case, a moratorium), Pyongyang can taketh away when international environment changes.

During the Clinton administration’s bilateral negotiations with Pyongyang in the late 1990’s, Kim Jong-il agreed to place a moratorium on long-range missile launches as a confidence-building measure. While the suspension lasted approximately six years—a considerable period of time given the regime’s track record of violating agreements—Kim broke it in 2006 when it was in his interest to do so.

This also is not Kim Jong-un’s first moratorium. As part of the February 2012 Leap Day agreement, the younger Kim pledged to suspend nuclear and missile tests and even agreed to suspend nuclear activity in Pyongyang’s main nuclear reactor and permit international inspectors to verify the suspension. That accord lasted a grand total of several weeks, terminated after the North Koreans decided to launch a satellite into space.

Last but certainly not least, there remains very little concrete evidence, other than vague statements from North Korean state media and optimism from South Korean officials, that Pyongyang is genuinely interested in exchanging its nuclear weapons program for political, economic, and security concessions. Kim Jong-un may be talking the talk and saying the right words as the summit gets closer, but he has yet to offer anything concrete to the international community that would be irreversible. Nor should the Trump administration expect such an offer; if Pyongyang is going to give a major concession, it is going to require Washington to give up something major in return.

As much as we in the West would like to place stock in our own powers to persuade and cajole, the fundamental principle driving Kim Jong-un’s nuclear calculations is at still a high wall to climb—that, as long as regime-change continues to be an acceptable idea in the U.S. foreign policy discourse, North Korea will have no incentive to rid itself of a capability that has forestalled a U.S. military operation against Pyongyang for the previous decade.

To be clear, a North Korean testing suspension is far better than no suspension at all. Any move by Kim Jong-un that would make a comprehensive diplomatic process easier to sustain and lessen the prospects of a devastating, highly irresponsible and calamitous military option on the part of the United States should be welcomed.

But the White House should not trick itself into high expectations. The international community is only just beginning a diplomatic trek that will be long and arduous. If diplomacy is to succeed, Washington better condition itself to setbacks and inevitable, unavoidable disappointment.

In the end, the U.S. may be forced into accepting the inevitability of a nuclear armed North Korea just as it accepted a nuclear armed China during the Cold War. And as jittery as that would make the foreign policy establishment in the Beltway, deterring a cruel but ultimately rational Kim dynasty that is obsessed with its own self-preservation is a far more durable course for the U.S. than a preventive war that would kill hundreds of thousands of people (including Americans in South Korea) and put the U.S. homeland in the crosshairs of Pyongyang’s nukes.