After 8 Years of President Obama, We Are Still at War

Daniel DePetris
|
Posted: Jan 09, 2017 12:23 PM
Share   Tweet
The opinions expressed by columnists are their own and do not necessarily represent the views of Townhall.com. 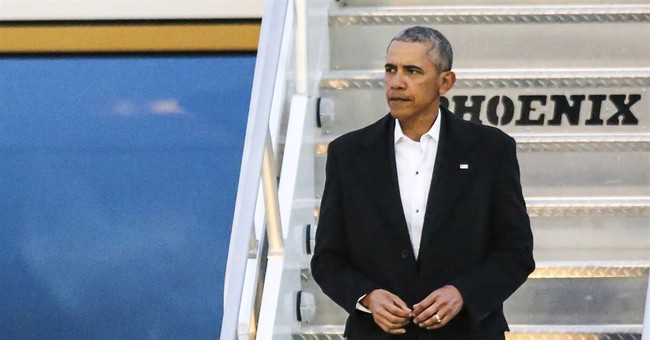 On January 20, President Barack Obama will depart the Oval Office in much the same way as he entered eight years earlier: as a wartime Commander-in-Chief.

U.S. military operations against an alphabet soup of terrorist organizations around the world have proven to be a lot more unpredictable than the administration previously believed (or our D.C. elites recognize or admit). In fact, on the Obama administration’s watch, the war on terrorism has expanded to new frontiers and new countries, with very little evidence that those campaigns will enhance American security or end anytime soon.

If President George W. Bush chose to go on the offensive against terrorism through the invasion of entire countries, President Obama has taken an oversized scalpel to the problem by relying on special operations forces, drone strikes, the embedding U.S. trainers and advisers within regional militaries and local forces, the deployment of the U.S. Air Force at a moment’s notice, the selling of aircraft and munitions to allies, and the spending of billions of dollars on security assistance to partner nations in the Middle East, Southeast Asia, and Africa.

The numbers tell the story; the Council of Foreign Relations has collated the Pentagon data and reported that 26,171 bombs were dropped by U.S. forces in 2016 — 3,027 more than the previous year, which also happened to be a period of intense activity from the U.S. Air Force.

Just as interesting as the raw count, however, is how many countries are now under Washington’s ever large radar: A total of seven from as far east as Pakistan’s tribal regions to as far west as Libya’s Mediterranean coastline.

The Boilerplate complaints about the Obama administration being too passive on the international scene and far too hesitant to authorize the power of the U.S. military have always been hard to take seriously. U.S. soldiers, sailors, airmen, and marines have literally never had a day off in the last eight years, whether the mission involves conducting night raids on Taliban hideouts in Afghanistan, bombing missions against Islamic State oil rigs in eastern Syria, or special operators advising Iraqi forces as they push into Mosul.

U.S. soldiers, in fact, continue to die in Iraq and Afghanistan — a development that is about as divergent as one can get when comparing the risks that these men and women face every day with the rest of America, which carries on with a peacetime mentality.

Outside of a large number of boots on the ground, the Obama administration in all actuality has been just as militarily active as its predecessor. The withdrawal of tens of thousands of U.S. conventional forces from Iraq and Afghanistan is a bit deceiving, if only for the fact that it all too often overshadows the more discreet, indirect tactics that the United States has used over the last several years to continue the counterterrorism campaign.

Washington usually avoids discussion on this topic, but U.S. sales of conventional arms have skyrocketed over the last eight years, amounting to a total value of $278 billion from 2009-2015. To put this number in perspective, that sum is an increase of 116 percent from the previous administration and more than any other U.S. administration since World War II.

Arms sales in general have been packaged as a counterterrorism necessity to critical partners in volatile regions. But in the case of defense exports to Saudi Arabia, the United Arab Emirates, and Qatar, the sales are just as much a way of keeping countries in the region onboard with U.S. policy priorities. In other words, Washington continues to essentially exert control over other countries with massive sales of fighter aircraft and the most sophisticated military technology on the planet in the hope that doing so will keep these countries from sabotaging short-term U.S. national security priorities.

The legal authority that the United States has used to prosecute and expand the war on terrorism has also been stretched to its limits over the past eight years.

What was meant to be a relatively focused statutory authorization of military force against the perpetrators of the September 11 attacks has long been converted into blanket authority to send the U.S. military anywhere in the world if there is even a fourth-tier connection to the Al-Qaeda terrorist network. Whether we would like to admit it or not, the United States is now at war across seven countries and two continents, all under the rationale that a 60-word authorization that was passed more than fifteen years ago is a sufficient enough legal basis to scramble the F-16s.

This is the situation that the next administration will be facing as soon as it’s sworn in on January 20: A country that is still at war, a military that is playing whack-a-mole with terrorists across continents, arms sales run amok, a special operations community that has taken on the role of America’s front-line shock troops, and a constitutional imbalance on matters involving war that is drifting ever further towards the executive branch.

It will be up to the next Commander-in-Chief after January 20 to correct the imbalance; establish a counterterrorism and foreign policy that doesn’t depend upon overly reactive, tactical decisions at the cost of strategic thinking; and enact a culture in Washington that values pragmatism as much as it values tough rhetoric.

If Washington fails to do any of this and takes the path of least resistance by throwing its lot in with the status quo, Americans may wake up eight years down the line with its military at war in fourteen countries rather than the current seven. When a majority of the American people believe that U.S. foreign policy over the last fifteen years has made America and the world less safe, the time has come for policymakers in Washington to not only take notice, but craft policies that place an emphasis on trade and diplomacy over military force, regime change, and unconditional U.S. security commitments. With the advent of a new administration in Washington, Americans may see their aspirations converted into reality.