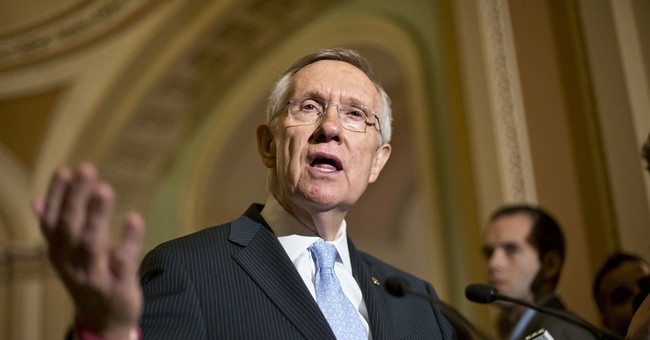 This is not a prediction of what will happen this week, but rather documentation of what has already happened in Harry Reid’s Senate. That’s right: Reid has already invoked the nuclear option. On October 6, 2011, ABC News explained:

“Democrats invoked the so-called ‘nuclear option’ to change the rules in the U.S. Senate, bypassing Republicans and evading two difficult votes, including one on President Obama’s jobs bill.

“The procedural precedent, which blocked Republicans from adding more amendments, could speed passage of a bill to punish China for currency manipulation.

“It could also open a Pandora’s box, forever altering the traditions of the senate and its role on Capitol Hill.

“…Republicans sought to add as amendments to the China currency bill two measures on which Democrats did not want to vote – one was on the President’s jobs bill, which they hope to change, and another was from Senator Mike Johanns, R-NE., to block EPA rules on farm dust.”

Reid’s use of the ‘nuclear option’ 649 days ago provides more clarity as to what exactly the ‘nuclear option’ is and why it is such a big deal. Throughout much of the recent debate, we’ve heard – and understandably so – about the filibuster and confirmation process for judicial and executive branch nominees.

Yesterday on Meet the Press, Sen. Mitch McConnell (R-KY) explained President Obama “has had 1,540 of his nominations confirmed, only 4 defeated. He's not lost a single member of the cabinet. He's getting them faster than President Bush was at the same time in his second term.”

And while it is absolutely true most folks don’t enjoy getting into the weeds on congressional procedure, conservatives must understand the procedure. Not only does a mastery of procedure help advance policy, but knowledge will also help explain Harry Reid’s actions.

Briefly: The Senate can change it’s rules at any time by a two-thirds vote (67), but the ‘nuclear option’ provides a way to bypass that super-majority threshold and change the rules with a majority (51). And yes, Vice President Joe Biden could be the decisive vote.

This is exactly what Reid did in October 2011 (sans Biden) when he was fearful the Obama administration would be dealt two embarrassing defeats if red-state Democrats voted to overrule the EPA on farm dust and reject Obama’s stimulus. Rather than allow those votes to occur, Reid went nuclear.

On the Senate floor, Reid said, “What just took place here is an effort to expedite what goes on around here.” He then played question and answer with himself: “Am I 100 percent confident that I’m right? No. But I feel pretty comfortable with what we’ve done.”

There are two important takeaways from this episode.

First, the actual impact of the unilateral rules change was rather narrow, only impacting amendments offered after cloture (requiring 60 votes) had already been invoked.

Second, while Reid deployed an admittedly small nuclear weapon on the Senate floor, the fall out was surprisingly minimal. There were a handful of animated speeches, but the China currency bill passed with 63 votes. Three free trade agreements passed a day later. And nominations and appropriations bills continued apace.

We could know as early as tomorrow whether Reid will go nuclear again. The stakes are much higher this time around, but Reid has shown a willingness to take the Senate to the brink to achieve major concessions from his Republican antagonists.

Earlier this year, Reid secured a series of the rule changes that weakened the rights of the Senate minority and limited the opportunity of individual senators to represent their constituents. Many in Reid’s conference wanted him to go further, secure even more concessions.

They may very well have their chance this week, and you can guarantee President Obama will be watching closely this week. As someone who frequently ignores the law (i.e., employer mandate), it should come as not surprise Obama has given Reid his blessing.

What was that quote about being a nation of laws, not men?