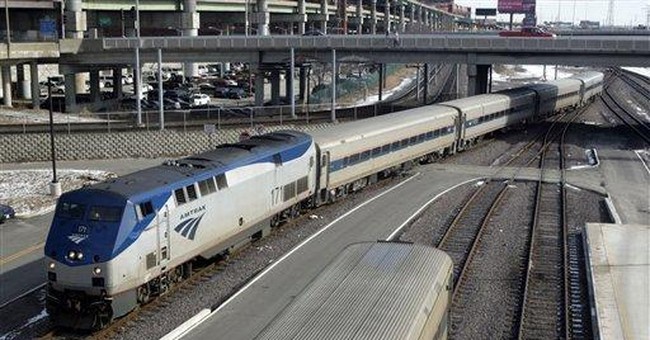 Little boys love to play with trains. It doesn’t stop, even when they grow up and move to Washington. Now the Democrats and Barack Obama are playing with trains and $8 billion of our money to build themselves a nationwide train set just like the Europeans.

It’s not really intended to build anything. Oh, sure, they’ll mouth the words about how wonderful rapid rail could be. As Vice President Joe Biden claimed recently, “it’s a down payment on a truly national program that's going to reshape the way we travel.”

It’s nothing of the sort. It’s a down payment on the 2012 election, Chicago style. Eight billion dollars doesn’t sound like much given the all-time biggest budget of $3.8 trillion. But that’s not the point. By committing to a bogus national rail system, Obama is promising billions of dollars of pork targeted at urban areas around the U.S. – nearly all of which voted Democrat in 2008.

This isn’t a plan to turn the nation eco-green, it’s a plan to keep the nation lefty blue. And the media have hopped on board like it’s actually a legitimate idea. CNN correspondent Don Lemon called one animation of what high-speed rail could look like “pretty cool” and “like the ‘Jetsons.’” It’s not like the Jetsons, it’s rapid rail like the Daleys.

You remember the Daleys, the Democratic political family whose machine has ruled Obamaland, er, Chicago for decades? This is the kind of pork only they could love. Because it’s designed to get votes – even liberals admit it.

The lefty Daily Kos blog had a detailed analysis of the Florida route and admitted politics was a deciding factor. “The I-4 corridor region could be sufficient to swing the outcome of Florida and its 27 electoral votes.” The blogger went on to explain why that would be so important. “So in a swing region experiencing population growth and crushing unemployment, you deliver a $3.5 billion high speed rail line.” That’s pretty important if you consider Florida has been key to recent presidential elections.

While the post also attempted to give other reasons for Porky Pig project, they are easily derailed. Look at the proposed Tampa-Orlando route. It’s 84 miles and plans claim to expect between 1.9 million and 3 million riders each year, depending on how many tourists use the train to go to Disney World. That must mean they are expecting people to come from Tampa – about 72 miles away from the resort – probably shouting “I’m going to Disney World” all the way.

Who could afford it? Amtrak’s much-touted Acela high-speed train costs at least $86 a ticket from Washington, D.C. to Wilmington, DE, just slightly farther than this trip would be. Now picture a family of four paying similar rates for one day trip to Disney World. That would double the cost of their daytrip to the park all for one train ride. Come on kids, let’s ride Buzz Lightyear's Space Ranger Spin, but make sure we stop at the bank on the way.

High speed rail works better in congested areas. There are only 5.4 million people in the Orlando/Tampa area. Now look at the Northeast corridor where Amtrak has the Acela train journalists love so much. That stretch from Washington to Boston contains 44 million people – about one-seventh of the entire U.S. population.

Envision the idea that nationwide high-speed rail would even work because of the distances and big empties involved. After all, Europe has high-speed rail, why not us? Europe also has nearly 200 million more people, 27 countries in the European Union and just 44 percent of the land that the United States has.

So why then all the news about it? Because this story highlights another disconnect – not just with the Obama administration but with the press.

It’s not surprising that leading Dems live in some fantasy where Americans can all suddenly afford to ride high-speed rail just like the vice president.

But journalists are also the problem. They like high-speed trains because they think it’s like building a network of Acela routes, like New York to Washington, our financial and political capitals – the places that matter to journalists. They don’t need to travel from Mobile, AL to New Orleans (one silly proposed route) or from Tampa to Orlando.

Journalists seem to expect that parts of the nation they denigrate as “flyover country” will magically turn urban if they get high-speed rail. And somehow the rest of us will become enlightened and give up our cars and hop on board.

Meanwhile, Democrats are taking us all for a ride to the 2012 election, and expecting us to pay the freight.