The Oops and Downs of Economic Predictions 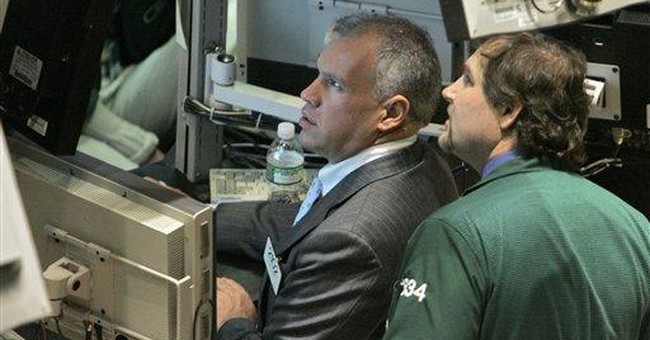 Up or down? Nobody really knows, if you’re talking about the economy.

There are tons of predictions about what will happen in 2008 – everything from “recession” from much of the media to market maniac Jim Cramer predicting “sunny skies.” Gas prices are supposed to go up to $3.50 this spring, according to the Energy Information Administration. Or even $4 by February, if you believe NBC.

But the truth of the matter remains, nobody knows. Americans are worried, many believing that what goes up must come down. The economy is surpassing Iraq as the No. 1 issue with voters thanks, in part, to relentless media coverage.

We’ve got good reason to be concerned. Since hitting an all-time high, the Dow is dropping like a stone. The market is off more than 1,500 points or almost 11 percent since it hit a new end-of-day record October 9.

There are two sides, however. Noted economists Brian S. Wesbury and Robert Stein, both of First Trust Advisors L.P., are among those who go the exact opposite direction. Reminding readers that unemployment numbers are often revised, they give an optimistic outlook for the year. “We remain confident that neither a recession, nor any significant consumer slowdown, is in the cards,” the two write in their January 7 Monday Morning Outlook.

Even Cramer, on a one-man crusade against the Federal Reserve causing “Armageddon,” takes an upbeat look at the upcoming year. CNBC's "Mad Money” host tells the January 1 “Today” audience “This is going to be another good year. I know it sounds like I'm a cock-eyed optimist, but there's a lot of good things happening.” He says the end of the year could be a time “to start looking at real estate as an investment again.”

And though unemployment jumped to 5 percent in December, it’s still just 5 percent, what many economists consider close to the best that can be sustained. The nation is also up to 52 straight months of positive job growth. The economy grew at a whopping 4.9 percent in the third quarter – a figured that was revised … up, not down.

None of this is new. Not even close. You find much of the same confusion and negative reporting throughout the latest bull market – just not as shrill as it is now. “With big business struggling, unsteady interest rates and signs of a recession, the best some forecasters are hoping for in 2006 is an average year,” said reporter Sharyn Alfonsi to kick off the New Year’s stock market predictions on the CBS “Evening News” of Jan. 1, 2006. That year, the big three networks mentioned recession or depression 49 times. The Dow was up more than 16 percent at year’s end. MSN Money called it “a great year for stocks.”

Think gas prices are scary at $3 or even $3.50? When gas was at $2.355, the CBS “Early Show” was discussing how long the economy could stand that high price before a recession. And that is nothing if you recall the outlandish predictions that followed. Hurricanes Katrina and Rita spawned more than 20 mentions of possible $4 or $5 gas in just five days on CNN. “How does $5 a gallon for gasoline sound?” said CNN’s Kelly Wallace on the September 22 “Daybreak.”

In a word, it sounds wrong. Like much of the reporting and many of the predictions. But few media reports get a follow-up story with a big “oops” attached. Instead, we get outlets like The New York Times blaming the president for an economy that has been on track for more than four years. A January 2 editorial said Bush was in “denial” and demanded “an unvarnished appraisal of the nation’s economy – including the politics and ideology that has driven it to this point.”

We do need an “unvarnished appraisal” of the economy that ignores politics and ideology. That needs to come from the press, and they aren’t doing the job.

CBS was more unusual than most in its quest for new year predictions. The network’s “Sunday Morning” show went to the psychics of Cassadaga, Fla., for a Dec. 30, 2007, forecast. Cassadaga is, according to reporter Bill Geist, “the psychic capital of the world.” Rev. Dawn Cassaday, “a clairvoyant and clairaudient,” delivered the “good news.” “I feel that the economy could actually be turning around in a very positive direction.”

The countless predictions leave us wondering what’s up. Maybe we really do need a psychic to find the answer.