Dan Celia
|
Posted: Oct 27, 2017 12:01 AM
Share   Tweet
The opinions expressed by columnists are their own and do not necessarily represent the views of Townhall.com. 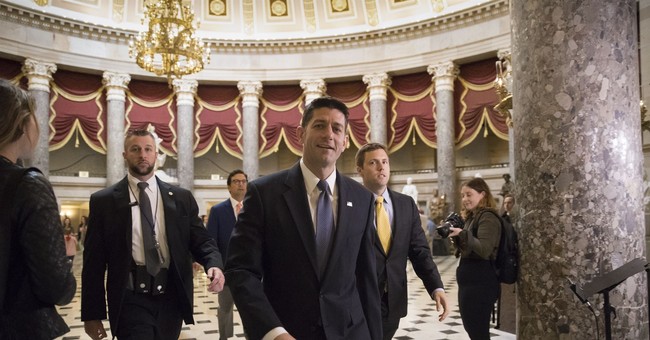 The Russian political backfire is being heard around the world—well, maybe only in Washington, D.C. Yet, despite the latest Clinton Foundation news and the corruption within the Clinton Campaign, the Left is still trying to paint tax reform as a benefit to only the rich.

It’s becoming more apparent that I’ve been right all along: The scent of the swamp is rather mild in comparison to the stench of the cesspool. Things are likely to get a little bit hotter around the District of Columbia, and it’s not going to involve President Trump. Some Republicans can’t seem to bring themselves to live in an environment where their do-nothing political status is being dramatically shaken to the core.

They have little left to do but say goodbye to their dream of living out their days maintaining the status quo in their royal-elite positions. All of this because someone dares to stand up to politics as we know them and instead work for the American people. It’s amazing to watch what one man can do when he isn’t beholden to special interest groups, lobbyists or political elites.

I believe only a small handful of people truly back this president. So, it is hard to imagine how tax reform can possibly get through the Senate, even though it looks like the House of Representatives has come to the conclusion that this is something that is worth working through—something worth a compromise in order to do what is right for the American economy and the American people.

Our representatives in the lower branch of Congress seem to understand it is important to reduce corporate tax rates, creating growth in corporate America, which will thereby create jobs for all classes of people, putting America’s manufacturing and service sectors back to work, and increasing market opportunities around the globe for our products and services. They believe it is worth it to watch wages continue to rise and see an America that is standing strong. Those who want us to fail will have to wait for another day when weak, ineffective leadership once again returns to our political class.

In the midst of the incredible corruption we see unfolding before our eyes, you would think our congressional representatives would want, if nothing else, to at least give the appearance that they are about the business of the American people. Maybe it would help them separate themselves from the growing cesspool around them.

Let’s look at the list: Tax reform, infrastructure plans, building a wall, a strong national defense, beginning to shrink the size of the federal government, and seeing deficits reduced alongside GDP increases that reflect a growing economy. To this, you can add a more efficient, effective and smaller government. These should all become a catalyst for Republicans. They can rally around the flag, even if they aren’t willing to rally around the president.

I know many are beholden to the lobbyists and special interest groups that have lined their campaign treasure chests, but they are in an ideal situation where they can vote for the plan as they shrug: “Sorry, if we had a different president...” They have an opportunity to blame this president for everything. So, just blame President Trump and get about the business of doing what is right for America.

Yes, this tax reform plan will likely be one of President Trump’s greatest economic achievements, but it can also be the very tide that will lift all the boats in the Republican Party. It’s hard to imagine how difficult it could be for a group of men and women who want nothing more than to get reelected to not understand this. If they do this for the American people, at the same time, they will be able to use this tax plan for self-serving purposes. It seems to me lawmakers should possess enough logic to grasp this concept.

The benefits are numerous—lower poverty rates, higher employment, more jobs than we have people, higher wages, lower taxes, fewer people on government subsidies, more discretionary income, a higher standard of living for everyone, an opportunity for prosperity and growth that we haven’t seen since the 1950s, and leaving the next generation a country in better shape than we found it.

Given all this, is it possible that tax reform could not get passed? I’m afraid to say that the progressive and poisonous politics of the day could rise above what is right and good for America.

Still, maybe the DNC backfire heard around the world will begin to change some of the mentality, logic and convictions of Republicans who desperately need to unite.

How about them uniting and rallying around the flag and the people that elected them?

Let’s get something done.