Dale Wilcox
|
Posted: Jan 09, 2021 12:01 AM
Share   Tweet
The opinions expressed by columnists are their own and do not necessarily represent the views of Townhall.com. 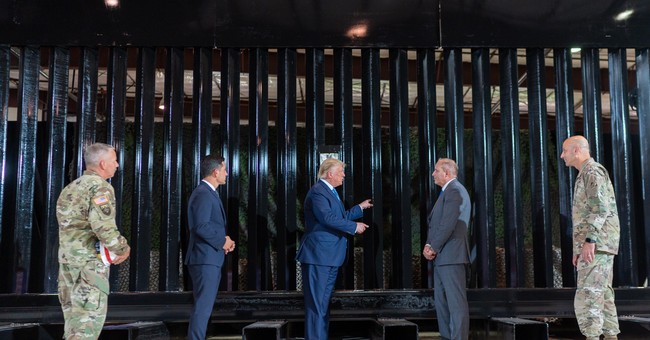 Much has been written and discussed recently about what will be the legacy of the Trump administration. The political media and left-wing activists are feverishly at work writing their version in the hope that it will be accepted by the public as common knowledge. It is unsurprisingly the most negative version possible, with allegations of inciting violence in the Capitol building and long ago-debunked tales of Russian collusion. This is nonsense. The most enduring legacy of the Trump administration will be the construction of 450 miles of new wall at our southern border.

To fully grasp the enormity of this achievement, one must go back to the political landscape of 2016. The Obama White House had spent eight years trying to convince America that it should aspire to be part of a borderless continent. Those trying to enter our country illegally were akin to travelers on the Underground Railroad, seeking freedom and a better life. Who were we to block their entry with a wall? To deny them passage is mean-spirited and evidence of racism in our hearts.

To enforce the sovereignty of the United States at the border was a fool’s errand anyway, the argument went. The U.S.-Mexico border is almost 2,000 miles of harsh desert terrain, and it would be nearly impossible to police it with walls. Furthermore, with a price tag upwards of $20 billion, a wall was an extravagance that the government simply couldn’t afford.

In less than four years, President Trump exposed the fallacy of virtually all of those claims. A borderless nation is no nation at all, but rather an invitation to chaos and societal breakdown. While many border-crossers seek a better life, there are too many with criminal records and gang membership who terrorize American cities. Such outcomes are not inevitable, Trump argued. An America with strong borders and a robust economy would have a wall with a door on it to welcome immigrants through an orderly, legal process.

When Congress stonewalled the president’s attempts to secure wall construction funding, he went around them by transferring military allocations towards the project. When anti-borders activist groups tried to block the effort in the courts, the administration fought them and have largely won. See any of my organization’s briefs that have made the legal case for wall funding.

Perhaps the biggest victory by President Trump on this issue has been demolishing the argument that “walls don’t work.” Since wall construction began after 2016, overwhelming evidence has come in that walls indeed work. Among the flood of supporting data is the fact that in the Yuma sector alone, illegal entries in the area with a new border wall system dropped a staggering 87 percent from 2019 to 2020.

Similar results have taken place in the Rio Grande Valley sector, where no previous wall existed. There, apprehensions dropped 79 percent and narcotics seizures dropped 26 percent from the previous year. Homeland Security (DHS) officials have repeatedly said that when walls go up, it forces human traffickers, drug smugglers and other to change their tactics, allowing Customs and Border Patrol to direct resources to other areas.

Thanks to the wall shrinking that gap for smugglers to exploit, DHS has over the last four years seized more than 4 million pounds of hard drugs like fentanyl, cocaine, and methamphetamine—almost double the annualized amount of drugs seized between 2009 and 2017.

Faced with these facts, critics have chirped that Trump’s success is diminished because he didn’t build a “new wall” when it only replaced an existing barrier. This claim is rendered absurd when one looks at the difference between the new 30-foot-tall steel-bollard barriers that now stand in place of what was no better than dilapidated chain-link fences.

In the light of Congress’ recent $900 billion COVID-19 relief package and $1.4 trillion spending bill, their previous opposition to wall funding looks even more petty and ridiculous. Why is it we can afford $10 million for gender programs in Pakistan, $1.3 billion to Egypt and a host of other questionable expenditures, but we can’t find $20 billion for our own nation’s long-term security?

Make no mistake, building 450 miles of border wall in less than four years is a massive achievement, particularly in light of the tremendous opposition to it. If President Trump’s successors choose to defund construction or even dismantle what has been built, then they will own the disastrous consequences that will result from it. Until then, this enhancement to our sovereignty and security should be remembered as President Trump’s most impressive achievement.

Dale L. Wilcox is executive director and general counsel at theImmigration Reform Law Institute, a public interest law firm working to defend the rights and interests of the American people from the negative effects of mass migration.