Cyrus Yaqubi
|
Posted: Mar 17, 2022 12:01 AM
Share   Tweet
The opinions expressed by columnists are their own and do not necessarily represent the views of Townhall.com. 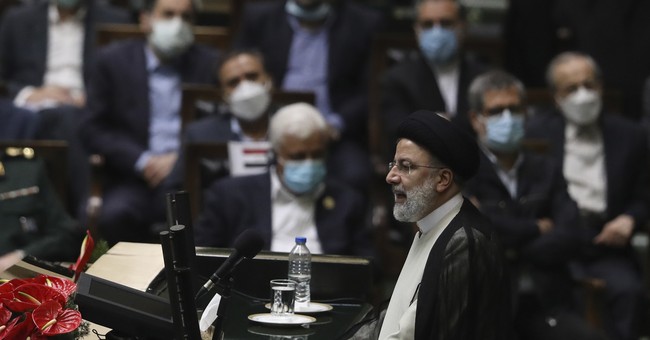 Hours later, Islamic Revolutionary Guard Corps’ (IRGC) public relations department claimed responsibility for the rocket attack in a statement, claiming that it had targeted an Israeli Mossad base.

But the main question is: What was the purpose of Khamenei's missile attack on Iraqi Kurdistan and why did he take such action in a situation where the world is focused on the Ukraine crisis — and what were his goals with this attack?

An IRGC spokesman claimed the attack was in retaliation for the death of two of IRGC’s Quds Force colonels in Syria last week who were killed in an Israeli airstrike, hence Iran's claim that a Mossad base in Erbil was the target of its missile strike. They also announced a number of fake names as Israeli agents who were killed or wounded in this attack. Of course, it is clear that these names are all false casualties because, according to local officials of the Kurdistan government, no one was killed or injured in Iran's attack. In addition, the missiles hit the city of Erbil sporadically, and for example, hit and damaged the building of the local Kurdistan TV.

The Iranian regime has been targeted by Israel for a long time. Several people involved in the regime's nuclear projects, such as Fakhrizadeh, who was known as the father of the regime's missile and nuclear projects, have been eliminated by Israel, and several sites involved in the regime's nuclear program were destroyed, like the facilities on the Natanz site, where a large number of centrifuges were practically destroyed. Last month, Israel launched a major attack on Iranian drone bases in Kermanshah province, destroying a large number of aircraft. In addition, a number of IRGC forces in Syria have been continuously struck by Israeli attacks and Khamenei was not able to show any reaction or retaliation.

So, Khamenei had to do something, because otherwise the morale of IRGC forces, which is not good at all these days while few of them are willing to go to Syria, would be even worse. Since Khamenei could not invade Israeli territory and did not dare to do so, the best place to attack was Erbil.

First, Erbil, which is controlled by the Kurdistan Democratic Party led by Barzani, has not accepted Khamenei's hegemony, does not have a good relationship with Tehran, and has independently established good relations with the United States, Israel, and Turkey, as well as with Iranian Kurdish forces opposed to Khamenei by sheltering and allowing them to operate in areas under their control. As a result, Khamenei fired missiles at Erbil, and tried hitting several birds with the same stone. First, he wanted to raise the spirit and morale of his forces and pretend to avenge the deaths of his two colonels and the other blows he had received from Israel.

The second is to warn Barzani that if he does not accept Khamenei's hegemony and keeps supporting the Iranian opposition, then they could be targeted at any time.

Third, the Iranian strike could be an attempt to blackmail the United States and European countries that are currently involved in the Ukraine crisis and have reached a deadlock with Iran in Joint Comprehensive Plan of Action (JCPOA) negotiations. Iran's message: If the West won't accept our terms in JCPOA talks and doesn't lift all sanctions while recognizing Iranian hegemony and influence in the region, Iran can destabilize the region again, which will further increase the price of oil.

But did this missile attack take place from a position of power demonstrating Khamenei's ability, or to the contrary, does it show Khamenei to be someone who is drowning and clinging to anything, thinking that with this attack he can save his dying regime?

Because Iran is currently in the throes of an economic crisis where more than 60% of the Iranian population is below the poverty line, Iranian society is on the verge of explosion. These days, protest rallies and demonstrations of different segments of the society are continuously seen in all cities of Iran. For the second year in a row, Iran has a budget deficit of more than half of the country's total budget, which has led to the printing of money without backing, in turn pushing overall inflation above 50% and for some items above 60%.

If U.S. sanctions continue, there can be no doubt that there is not much time left until Iranian society explodes. But Khamenei thinks he can take advantage of the energy crisis created by Russia's invasion of Ukraine and put pressure on European countries to accept his terms and save his regime by selling oil without completely shutting down his nuclear project.

But this blatant aggression, with ballistic missiles from inside Iran while they are engaged in the Vienna JCPOA talks, shows once again that any concessions to this regime make it bolder and Khamenei interprets it as a green light for more terror, crisis, and incitement to war in the world.

As a result, as far as the international community is concerned, they must strongly condemn Khamenei's missile attack and extortion, adopt a firm policy toward Iran, and deny Khamenei any appeasement to make it clear to him that he can not save his regime in this manner. By adopting such a firm policy, we can be sure that the Iranian regime will soon collapse from within, and this will be in the long-term interests of not only the Middle East but the entire world.

Cyrus Yaqubi is a Research Analyst and Iranian Foreign Affairs Commentator investigating the social issues and economy of the Middle East countries in general and Iran in particular.
Democrats Have a 'New 2022 Strategy' to Keep House Majority But There's a Big Problem With It
Leah Barkoukis
Biden Adviser Says the Quiet Part Out Loud on Why Americans Must Continue Facing Pain at the Pump
Leah Barkoukis
CNN Had the Most Predictable Response to the Coming Biden Recession
Matt Vespa