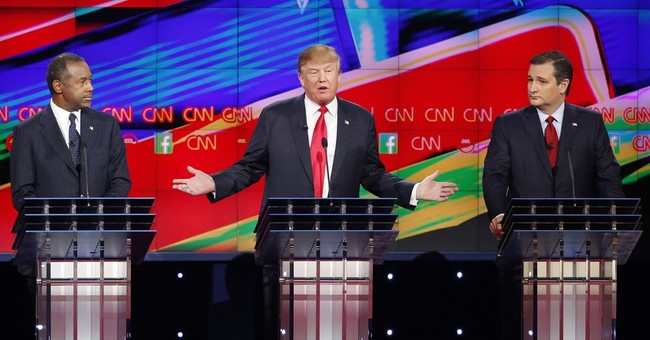 Two Hispanics, a diminutive Libertarian and a Donald loomed large in the fifth and thankfully, last Republican debate of 2015. The amigo Senators Rubio and Cruz stole the night “insulting” each other in what can only be described as a full-on duel between the sole Hispanics running. This was also the first time Senator Rand Paul had some strong moments, while Trump sustained his triumphant position with even more verbal firepower.

“And you know, there was one commentator that put it this way that, for Marco to suggest our record's the same is like suggesting ‘the fireman and the arsonist because they are both at the scene of the fire.’"

But Rubio had his own slings and arrows, exposing the fissure in Cruz’s “carpet bomb ISIS into oblivion” strategy.

“Three times he voted against the Defense Authorization Act, which is a bill that funds the troops. It also, by the way, funds the Iron Dome and other important programs. And I have to assume that if you vote against it in the Senate, you would also veto it as president.

“He has also supported, by the way, a budget that is called the containment budget. And it is a budget that would radically reduce the amount of money we spend on our military. You can't carpet bomb ISIS if you don't have planes and bombs to attack them with,” Rubio assailed.

But Cruz shot back at Rubio on his Achilles’ heel: amnesty. With searing precision, Cruz reminded voters that Rubio was one of the main architects of the 2013 pro-immigration-reform Gang of Eight who successfully got the Senate to pass a bill granting amnesty to illegal immigrants.

“Border security is national security. And, you know, one of the most troubling aspects of the Rubio-Schumer Gang of Eight Bill was that it gave President Obama blanket authority to admit refugees, including Syrian refugees without mandating any background checks whatsoever,” Cruz said.

“Now we've seen what happened in San Bernardino. When you are letting people in, when the FBI can't vet them, it puts American citizens at risk. And I tell you, if I'm elected president, we will secure the border. We will triple the border patrol. We will build a wall that works and I'll get Donald Trump to pay for it,” added Cruz

By connecting Rubio’s support of open borders with terrorism, Cruz – with the help of Senator Rand Paul – successfully portrayed Rubio as weak on national security (now a top – if not the number one – issue for voters).

But Rubio fought back, stabbing Cruz with his own weak record on national security, lambasting his adversary for voting against allowing the National Security Agency’s bulk collection of phone records. Under the new USA Freedom Act, which Cruz vigorously supported, the NSA must obtain a court order to spy on terrorists – which slows down the good guys.

“Because I promise you, the next time there is attack on -- an attack on this country, the first thing people are going to want to know is why didn't we know about it and why didn't we stop it? And the answer better not be because we didn't have access to records or information that would have allowed us to identify these killers before they attacked,” Rubio warned.

Denouncing Rubio’s support for increased spying on Americans’ phone records to prevent terrorism, Paul picked up the skewering of Rubio where Cruz left off. To thunderous applause, Paul declared Rubio “the weakest of all the candidates on immigration.”

“He is the one for an open border that is leaving us defenseless. If we want to defend the country, we have to defend against who's coming in, and Marco is -- has more of an allegiance to Chuck Schumer and to the liberals than he does to conservative policy,” Paul added.

Paul also went after Governor Chris Christie, who found himself elevated from the so-called “undercard,” to the main stage, after achieving higher poll numbers. After Christie responded that he would shoot down a Russian plane if it flew into a hypothetical no-fly zone over Syria, the dovish Paul chided Christie for being a warmonger without the temperament to be president.

“This is something -- this type of judgment, you know, it's having that kind of judgment; who you would appoint and how you're going to conduct affairs, that is incredibly important. I mean, I think when we think about the judgment of someone who might want World War III, we might think about someone who might shut down a bridge because they don't like their friends,” Paul elaborated, referring to the Christie scandal that became known as “Bridgegate.”

Bush said Trump lacked seriousness as a candidate because of his positions on immigration and temporary ban on Muslims entering the country; and the two snipped at each other like dogs for a few seconds.

Then Trump warned voters that Bush too is weak on immigration enforcement and thereby would jeopardize US national security.

“When Jeb comes out and he talks about the border, and I saw it and I was witness to it, and so was everyone else, and I was standing there, ‘they come across as an act of love,’ he's saying the same thing right now with radical Islam. And we can't have that in our country. It just won't work. We need strength,” Trump said.

During the debate, Bush kept repeating Trump couldn’t insult his way to the presidency. To which, Trump chortled:

Whatever you want to call Trump’s strategy, it’s working. In contrast, Jeb’s position on the debate stage keeps “moving over further and further” from the center, based on his declining poll numbers. “Pretty soon you're going to be off the end...” laughed Trump. Clearly, he already is – along with many others who should just step aside.