University of Missouri President Forced to Resign because of his Whiteness 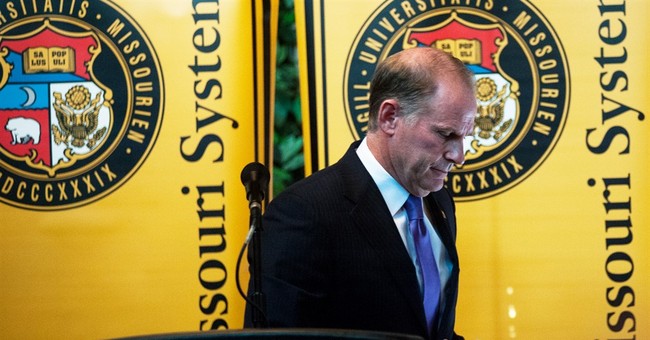 Since when is one white man responsible for “racism” on the University of Missouri campus? Apparently, when a mob of black students, riding the Black Lives Matter movement decides he is. Amid 30 black football players threatening to boycott games unlessPresident Tim Wolfe resigned, protests and a black graduate student going on hunger strike, Wolfe bowed to this nonsense and resigned.

In a Facebook post, graduate student Jonathan Butler wrote he was willing to starve himself to death if Wolfe didn’t resign because of the “slew of racist” incidents on campus. I’m still waiting to see this laundry list of racist events that black students feel aggrieved by. It seems there are a few isolated incidents on campus that no president black, white or otherwise could completely eradicate.

A swastiska was drawn with human feces on a bathroom wall and students protested on October 27th. Wolfe publicly decried the act and said racism wouldn’t be tolerated on campus.

In early October, while a group of black students were rehearsing a skit, a white student jumped on the stage and shouted racial slurs. A few days later, 10 black students surrounded Wolfe’s car and refused to move during the homecoming parade until police threatened to arrest them.

Because Wolfe didn’t stop to talk to the angry mob and allow protestors to possibly attack him, they issued a list of eight laughable demands, including Wolfe’s firing.

The ridiculous demands range from “Tim Wolfe must acknowledge his white male privilege,” to “inclusion curriculum” that is vetted by students and faculty of color, along with 10% increase in minority staff and faculty. Sounds like just hire people based on color – not qualifications. What exactly is an inclusion curriculum? I guess – in the name of black empowerment – they want more exploitive, left wing, Black Studies classes of inferior course work, teaching black students that whites are racist.

Perhaps Missouri’s black students would be happy if the got more classes like the one Dartmouth College offered this year, its ode to the “unarmed black teen” lie, “10 Weeks, 10 Professors: #BlackLivesMatter.”

…Or, courses offered at Princeton University this year, such as “Race Riots and Revolution” about discrimination in housing in the 1960s, and “The New Jim Crow: US Crime Policy from Constitutional Formation to Ferguson” to help students “understand the political construction of crime, colorblindness, and legitimate state violence.”

Payton Head, the president of the Missouri Student Association, said he was called a racial slur twice on campus. This isn’t nice or acceptable, but a university president can’t muzzle another student’s free speech or stop him or her from being a racist. A fellow Georgetown alum, who was a year behind me, told me about a nasty experience she had during her senior year. She was sitting outside with a black friend and their loud talking bothered a white student. He turned around and said, “I’m sick of looking at your ugly nigger faces.”

Mizzou isn’t the only university or college that has been plagued by racism. And it won’t be the last, as the Washington Post reminded us.

“Nooses have been left hanging on trees at Duke University and the University of Mississippi. Students at multiple schools have hosted “blackface parties.” The University of Southern California’s student body president was called an “Indian piece of s—.” Even Yale, a supposed bastion of Ivy League etiquette, saw swastikas scribbled across its campus.”

White liberals are allowing the Blacks Lives Matter movement to manipulate them with lies and false charges. It has gotten totally out of control with people losing their jobs over nonsense.

The Missouri Students Association letter to the Board of Curators demanding Wolfe’s ouster began by stating that the school’s 2014 silence over the shooting of Michael Brown was to blame for the “increase in tension and inequality” on campus. What a crock! Michael Brown caused his own tragic death by acting like a hoodlum. Before officer Darren Wilson shot him, Brown stole cigarettes from a convenience store, roughing up the clerk in the process. Then Brown refused to comply with Wilson’s order to walk on the sidewalk, and then reached inside Wilson’s patrol car for his gun.

Third would be for black people to start acting like equal citizens not victims of “oppression.” Maybe then you’ll be treated as equals. The irony of this mess was that while the black students complained about Wolfe’s “white privilege,” it was their black privilege that got Wolfe fired.

I could go on. But you get the drift. If your black life matters, then stopping acting like complete fools!