Note to Political Reporters: Take a Page from the Sports Guys' Playbook 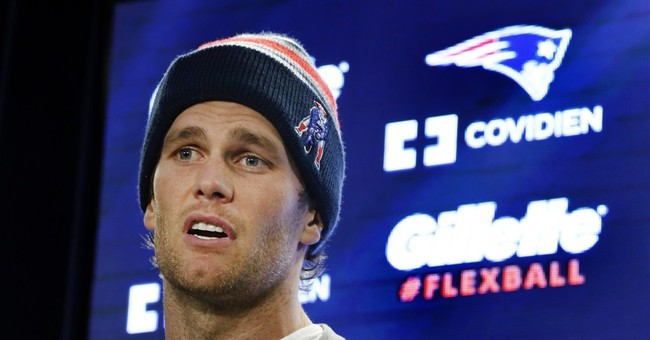 New England Patriots quarterback Tom Brady said he has balls, knows how to use them and enjoys playing with his soft balls. “I like them the way I like them, which is 12.5, deflated or inflated, whatever norm you are using.” Uh, oh! Was Brady caught on a sex tape? (Should this op-ed be rated R for mature audiences only?) readers 18 years of age or older?)

No, that was Brady responding to allegations from the Indianapolis Colts the Patriots cheated in the AFC National Championship Game by underinflating their balls.

During a January 22, 2015 news conference on “Deflategate,” Brady vigorously denied tinkering with his balls. “I would never use anything out of the rules of play or have anyone do anything that is outside of the rules of play,” Brady reiterated. National Football League guidelines mandate players “balls,” as in footballs, must have inflation levels between 12 and a half to 13 and half. No softer or harder balls allowed!

After the Patriots trounced the Colts 45-7 (softer balls are better for quarterbacks to handle—that is catch and throw—making it easier to score touchdowns and win), Brady joked: “Things are going to be fine. This isn’t ISIS. No one’s dying.” True, this doesn’t rise to the level of national security and beheadings. But if these allegations are true, it means the Patriots cheated their way to the Super Bowl game this weekend against the Seattle Seahawks. And then lied.

Sources told ESPN that 11 of the 12 balls the Patriots used during the playoff game were “underinflated by 2 pounds per square inch of air.”

Borrowing from Mammy in Gone with the Wind, Patriots Coach Bill Belichick said he didn’t know “nothing about no soft balls.” Asserting in a separate news conference: “In my entire coaching career I have never talked to any player, staff about football air pressure.”

An exasperated Belichick claimed he never talked about balls so much in his 40 years of coaching and “had no knowledge of the various steps involved in the game balls.” Apparently, neither did sports fans. Balls are complicated things.

Brady contended players have to break in balls like “a baseball mitt,” by handling them a lot. (Remember we’re still talking about footballs.) He added he couldn’t tell if any of his balls were deflated during the playoff game because it was rainy and balls are slippery when wet.

So how did the balls get soft? The dogged sports media wants to know and has been relentless in staying on top of “Deflategate.” This week news outlets reported the NFL has “zeroed in” on a person of interest and there’s video showing a Patriots locker room worker carrying the team’s balls from the locker room to someplace on the field. The question is, were the balls removed from the locker room where the inflation levels were supposed to be checked, according to game rules?

The NFL has yet to interview Brady about the alleged affair with his balls but for sports writers like the Washington Post’s Adam Kilgore, “Deflategate won’t go away.” Brady scoffed during a radio interview that the ugly ball matter was “ridiculous.” What’s ridiculous is the whole thing sounds like a bunch of dirty balls and this may be only tip of the iceberg. (No punt intended.)

As I watch the air come out of this story, I can’t help thinking the national sports reporters should switch roles with the White House press corps. If sports journalists were covering President Barack Obama’s White House with the tenacity of “Deflategate”, I bet we’d have more answers to all Obama’s scandals: IRS-gate, Benghazigate, Obamacaregate, and the Veterans Affairsgate. Instead the White House press corps throws Obama soft balls with no punch.