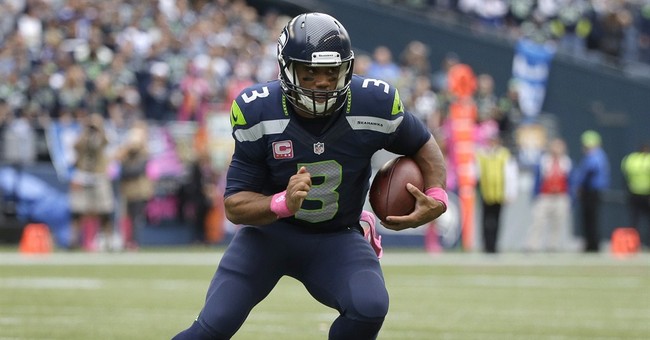 Apparently, there’s a manual on “how to act black” floating around among black Americans and Seattle Seahawks quarterback Russell Wilson is guilty of not reading it. In the spirit of full disclosure, neither have I. This hate is leveled by blacks towards other blacks, who speak standard, not broken, English and are or either aspire to be educated and successful.

Wilson’s “blackish” backlash was reported by Bleacher Report's Mike Freeman, who said he spoke with some of the Seahawks’ black players who whined Wilson didn’t act black enough and was too chummy with the team's management. Sounds like jealousy to me. Charles Barkley responded to this nonsense in a radio interview.

Barkley added, “And for some reason, we are brainwashed to think if you’re not a thug or idiot, you’re not black enough. If you go to school, make good grades, speak intelligent, and don’t break the law, you’re not a good black person.”

What’s truly pathetic is the same blacks, who feel threatened by successful blacks like Wilson, would almost certainly think Wilson was “black enough” if he knocked his girlfriend or wife unconscious like Baltimore Ravens Player Ray Rice. Or if Wilson acted like Vikings Adrian Peterson who “spanked” his 4-year old son with a switch, “cutting his arms, legs and genitals.” Better yet, if Wilson behaved like Carolina Panthers Greg Hardy: throwing his girlfriend on a bed full of 10 semi-automatic weapons and beat her up, for which he earned street cred by getting convicted, I’m sure Wilson’s blackness wouldn’t be questioned.

These negative images of black men, glorified in Hip Hop music, Hollywood and professional sports, have become synonymous with what it means to be black for too many black Americans. Let’s not forget the NFL is going to reinstate Ray Rice in November after only a few months of suspension.

Wilson wasn’t the first and sadly won’t be the last black person taunted and mocked by other blacks because he doesn’t fit into their definition of “blackness.” President Barack Obama's blackness was questioned during his first presidential campaign. Black conservatives like me are routinely ridiculed as “Uncle Toms” because we aren’t Democrats.

Recently, in response to an article I wrote about Stacey Dash's comments about black Americans, I received a very hostile email from a man named Chris Charles. He said I couldn’t possibly know what it means to be black because I’ve never lived in public housing or “the hood.”

“Have you ever even been to the hood, the ghetto or any such neighborhood? Are you from such a place? Do you have any clue as to what it is like? By looking at your photo, you look mixed . . .You see unlike you, I did not grow up in the environment you did. I grew up in public housing. And guess what? I have no problem with that,” wrote Mr. Charles.

First, both my parents are black. And black Americans come in all shades, largely due to the mixing of races during slavery when white Democrat plantation owners had both consensual and forced sex with slaves they owned.

No, I didn’t grow up in the hood; and I know what it means to be black just like millions of other blacks who didn’t grow up in public housing and know what it means to be black: First Lady Michelle Obama being one. Blacks like, you, Mr. Charles, need to realize being black means something different to every black person. We’re not a monolithic group who thinks and acts the same anymore than whites or any other race.

What’s tragic like Barkley said is blacks are their own worst enemy, more concerned with destroying each other with this preconceived notion of blackness. The reason whites as a race are creating more wealth than the black race is because they're worried about more important things than who's white enough. I don’t know any white person who extols criminal behavior as an example of “being white.”

Today, over 70% of black babies are born out of wedlock compared to 30% of white babies, which is a great prescription for poverty not success!As Brookings noted in a report, blacks are part of “the very groups of Americans who traditionally experience poverty, impaired child development, and poor school achievement have the highest rates of non marital parenthood.”

The destruction of the black family is what black Americans should be obsessing over NOT the successful black man or woman defying these statistics.