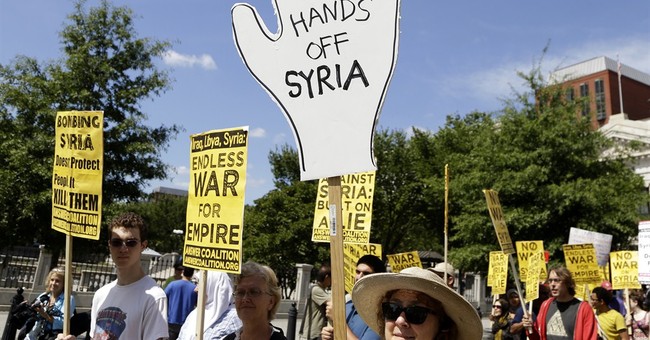 Where in the world is America, as Syria descends into utter carnage? This is the question nations are asking of us. Like it or not, America is the world’s conscience, defender of humanity, democracy and warrior against evil. President Barack Obama foolishly thought he could abdicate America’s leadership position in the world and other nations would step into our shoes.

No one did, but while the “world’s cop,” America, decided to take some time off, tyrannical dictators like Syrian President Bashar Assad filled the vacuum of leadership. For nearly three years, Assad has butchered 100,000 Syrians with impunity and displaced over six million refugees because he knew no one would stop him. Until now, because Assad’s madness is spilling over into the Middle East and threatening to blow up the region’s stability, which exists on a tight rope.

By leading from behind, which isn’t leading at all, Obama allowed Syria to morph from a civil war into what could become a regional war. Since Obama broadcast to the world over a week ago, he would take action against Syria, after Congress gives him permission, Assad smiles. As Obama broods over taking action like Hamlet, Assad plays hide and seek with his chemical weapons stockpile and military arsenal. Iran too has had time to mull things over and announced it will strike American embassies and other interests abroad if Obama attacks Syria.

I’m not for America rushing into war with Syria, or any country for that matter, but Syria isn’t just Syria’s problem anymore. It’s a Middle East problem, which America needs to contain because Syria’s friends like Iran and Hezbollah will eventually strike Israel, America’s friend, forcing the world’s superpower into a broader, longer and bloodier conflict. So, we need to act and act now but as Senator Rand Paul said, the president must articulate an end game with Syria otherwise there’s no reason for US intervention. A pinprick attack on Syria by America designed to help Obama save face is not acting on a red line.

As the Wall Street Journal has forcefully argued, any US plan should include regime change (I would advocate killing Assad) and bombing Syria’s six airfields and seriously degrading Assad’s military power. Any strike also should attempt to destroy Assad’s chemical weapons stockpiles. By now Obama should have exerted his executive power under the War Powers Resolution, which gives the president the authority to take military action for up to 90 days without seeking Congress’ approval.

Instead Obama took the coward’s way out, refusing to take responsibility as commander-in-chief for any action against Syria and passed the buck to Congress for a vote. Good public relations move on his part because if the mission fails, he absolves himself of culpability and can blame Congress (Congressional Republicans), as he’s done so many times before: debt ceiling, unemployment, sequester, federal budget, etc.

When a leader shirks being held accountable because he wants to save his rear end from blame like Obama that usually results in inaction under which we see America’s credibility and influence crumbling. This is the presidency of Barack Obama.

But what did Americans expect from a man, who within six months of taking office, traveled to Egypt to give a major foreign policy speech to the Muslim world, apologizing for America’s global greatest and might. My fellow Americans, you wanted the hope and change the nation’s first black president promised and elected him twice. I hope you’re happy with the change because now we need lots of hope. Obama said he wanted to transform America and he has.