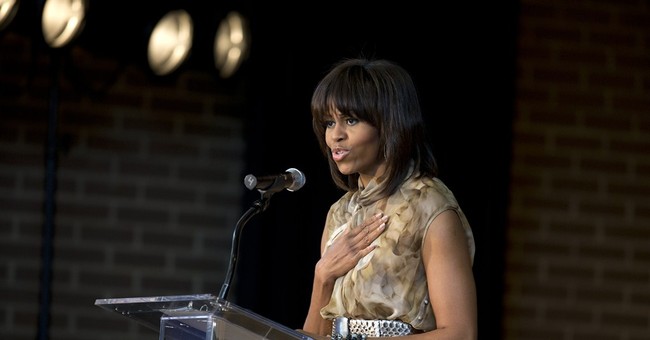 There’s a song that says “don’t let it go to your head, no.” Perhaps First Lady Michelle Obama and President Obama should listen to its lyrics. It seems America’s first black president -- as well as his wife -- have gotten so used to the coddling from the mainstream media that they believe they’re above criticism or heckling.

A protester disrupted Michelle Obama at a Democratic National Committee fundraiser Tuesday night and the First Lady got perturbed -- really perturbed. In fact, she got in the heckler’s face. A few minutes after Mrs. Obama started speaking at a home in the upper Northwest neighborhood of Washington, DC, gay activist Ellen Sturtz began yelling about how President Obama needed to sign an executive order banning federal contractors from discriminating against gays.

We can all agree that wasn’t cool for Sturtz to do. But hey, this stuff happens when your husband is president. Mrs. Obama’s response was interesting.

Why was it necessary for Mrs. Obama, an adult and the First Lady of the United States no less, to chastise a room full of other adults like children misbehaving? Her response to the heckler and the attendees was handled poorly but it didn’t end there.

Sturtz, who paid $500 to attend the fundraiser, told the Washington Post, “She came right down in my face. I was taken aback.” According to a White House pool reporter -- who was covering the fundraiser for the rest of the White House press corps -- the First Lady “left the lectern and moved over to the protester.” Then Mrs. Obama said, “Listen to me or you can take the mic, but I’m leaving. You all decide. You have one choice.”

I’m surprised Michelle didn’t ask Sturtz: “Do you know who I am?”

Conflictingnews reports suggest Sturtz, who is an activist for the gay rights group GetEQUAL hatched a plan with the organization to disrupt the event. Heckling certainly isn’t appropriate, but it happens to politicians and presidents frequently. The elegant way to handle it, particularly for a First Lady, would be to keep moving along, not get angry, and not face off with the heckler like a boxer preparing for a fight.

Since President Obama supports gay rights, instructs the Justice Department to ignore the Defense of Marriage Act, and praises NBA player Jason Collins for coming out of the closet, one would think Mrs. Obama would have taken a more sympathetic tone with Sturtz, a most loyal gay constituent. If Michelle would have simply told Sturtz she would be glad to hear her concerns after she finished speaking, Sturtz probably would have quieted down.

If former First Lady Laura Bush spoke to a heckler the way Michelle Obama did, the mainstream media would have been relentless in its finger wagging at Mrs. Bush. But Laura wouldn’t have behaved like that because she was used to some Americans and the media relentlessly heckling her husband.

Mrs. Obama is getting a taste of what accountability feels like as the media finally begins to scrutinize the Obama administration, specifically the scandals washing over his second term. Apparently neither the president nor Michelle is used to being treated like their predecessors -- and it’s making them angry, as evidenced by the First Lady’s outburst.

White House spokesman Jay Carney told reporters during his Wednesday briefing Mrs. Obama handled the heckler “brilliantly." No, but maybe she’ll learn. After all, this is all new to her.