Biden is the New Jimmy Carter, But He’s Even Worse

Craig Shirley
|
Posted: May 16, 2021 12:01 AM
Share   Tweet
The opinions expressed by columnists are their own and do not necessarily represent the views of Townhall.com. 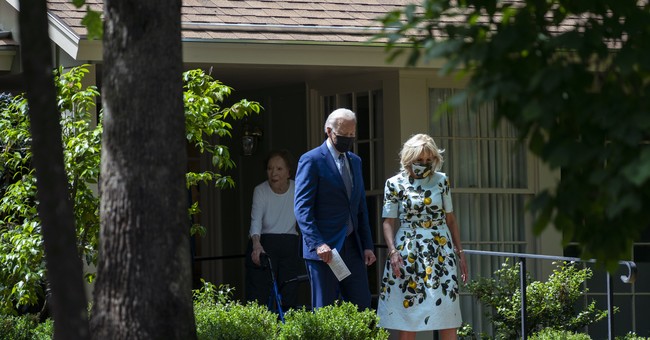 If there’s one guarantee in this life, aside from death and taxes, it’s that history really does have a fondness for repeating itself.

Empires rise and fall, leaders come and go, and every now and then a president wins election only to find himself in over his head with the burden of the Oval Office. It’s happened twice now in my lifetime, first with Jimmy Carter and now with Joseph R. Biden.

There has been a lot of discussion recently comparing the failed presidency of Jimmy Carter with the failing presidency of Joe Biden, but I will clue you in on something. Biden’s presidency is worse, and Biden is worse as a man and human being.

We’re five months into Biden’s presidency, and already he seems determined to outdo all four years of Carter’s incompetence by Christmas. Inflation is rising, the southern border practically doesn’t exist, the Middle East is in turmoil, and we recently experienced a gas shortage thanks to hackers easily breaching our digital infrastructure.

The setup to Biden’s presidency was much the same as Carter’s.

In 1976, Republicans were still dealing with the fallout of Richard Nixon. Watergate was still fresh in the minds of many Americans, and Gerald Ford, though a good man, was not the standard bearer the GOP needed. Carter seemed like a fresh, down-to-earth alternative, and consequently won the election that year.

Much in the same way, Biden was elected not necessarily on his merits as a leader but because Americans were looking for an escape from the shenanigans of Donald Trump.

Despite three years of relative economic stability, Trump’s constant need to pick fights on Twitter and the COVID pandemic in its early days wore out his welcome with moderate conservatives and independent voters. Thus, predictably, Biden won the contest with his offers of a return to “normalcy.”

In both cases however, it didn’t take long for many Americans to feel the buyer’s remorse that inevitably follows voting for the lesser of two evils.

For Carter, this came in the form of skyrocketing inflation and fuel shortages, the hostage crisis I n Iran, compounded by an inability to work with Congress and constantly butting heads with Tip O'Neill and the Left wing of the Democrats. Carter, simply put, did not get how to work with Congress when he arrived in Washington, having spent his entire career playing Georgia politics. Unfortunately, this contributed to his inability to pass legislation, even though at the time Democrats controlled the Senate.

Moreover, Carter’s inability to get his own messaging right added to his problems. The best episode of this is of course the notorious “Malaise” speech, where Carter essentially told Americans that their best days were behind them. This certainly didn’t inspire confidence when there was indeed a crisis of confidence on the home front, while abroad the Soviets and Iranians caused their fair share of mischief. It took the conservative presidency of Ronald Reagan to fix things.

Today, Biden only seems capable of being led by the hand by his staffers and signing whatever Nancy Pelosi and Chuck Schumer shove across his desk. When he does bother to make rare appearances, he seems to always pour gasoline on the proverbial fire.

Already, inflation is rising under Biden’s direction, and despite a jobs relief bill that spent trillions of dollars, less than 300,000 new jobs were created as a result. On top of that, Biden seems determined, come Hell or high water, to ignore the crisis on the southern border, so much so that he refuses to call the situation an actual crisis. Did I also mention he’s done little to nothing to help Israel while Hamas pounds it with rockets lately?

That’s all well and good (Biden is hardly the first president to bungle domestic and foreign policy) but Biden seems to genuinely care little for the country he was elected to govern.

Unlike Carter, who to his credit is a patriot, Biden has caved to the whims of the radical deconstructionists by ignoring the very real threats of Antifa and BLM. Biden has entertained the possibility of giving federal grants to schools that teach Critical Race Theory (CRT), which postulates that all White Americans are born evil and that all Black Americans are born victims. While on paper CRT is supposed to teach “diversity and inclusion,” in reality it’s undoing the sacrifices of the Civil Rights pioneers who wanted us to not see color or race.

Jimmy Carter was a bad president but he wasn’t a bad man. Biden is a bad president and a bad man. Carter never at his worst ever contemplated the things Biden does willy nilly, such as revoking Donald Trump’s protection of American statues from the evil of BLM and Antifa.

It’s truly un-American. Say what you want about Jimmy Carter, but he was never un-American. Biden is a radical leftist, a tool of the forces who want to destroy our country.

Biden came to Washington promising the world to his Leftist base. Time will tell, but unless Republicans get their act together and take back Congress and the White House, then our country’s trials have only just begun.