75th Anniversary of the End of WWII Commemorated in D.C.

Collin Callahan
|
Posted: Sep 27, 2020 12:01 AM
Share   Tweet
The opinions expressed by columnists are their own and do not necessarily represent the views of Townhall.com. 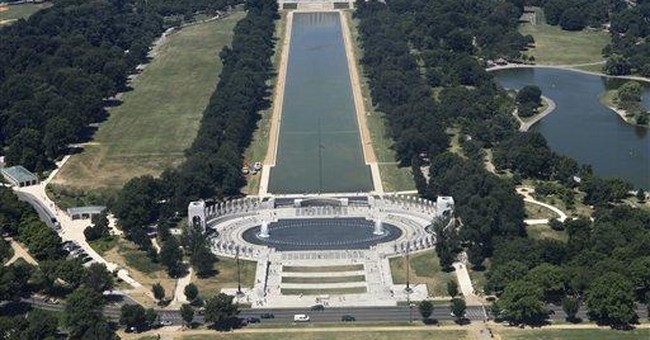 On September 2, 1945, Robert Vaucher led a formation of more than 500 bombers on a flight over Tokyo Bay. Their mission was to provide a show of force as General Douglas MacArthur formally accepted the surrender of the Japanese forces. This week, the 101-year-old veteran was in Washington, D.C., to commemorate the 75th anniversary of the end of World War II.

“We are disappointed that we could not deliver the planned aerial tribute that our World War II veterans and heroes deserve for their selfless service to our nation and the world,” organizers said in a statement. “It was a tough call for all of us to make, but at the end of the day it was about the safety and security of the pilots, crews, volunteers, aircraft and all those involved in the aerial tribute.”

Still, the organizers were able to honor the service and sacrifice of the Greatest Generation. A live broadcast featured tributes to those who served in WWII and included footage of the aircraft scheduled to participate in the flyover. At a panel discussion on Thursday, Lt. Col. Robert Vaucher joined retired Marine Sgt. Paul Hilliard and Connie Palacios — a Rosie the Riveter — to discuss their experiences during the war.

While Vaucher and Hilliard served overseas, Palacios was a part of the industry that gave service members the tools they needed to win the war. As the war in Europe and the Pacific intensified, it became clear that the U.S. would need to significantly increase its production of military equipment.

In 1939, fewer than 3,000 aircraft were built in the United States. By 1944, the country was churning out aircraft at a remarkable rate. Nearly 100,000 aircraft rolled off the assembly lines that year. The B-24 Liberator — a massive, four-engine bomber — was the most produced bomber during the war. At the peak of its production, a new aircraft rolled off assembly lines in Detroit, San Diego, Fort Worth, and Tulsa every 58 minutes.

Palacios worked as a riveter at a Boeing plant in Wichita, Kansas, where she helped produce more than 1,600 B-29 bombers — the largest and most sophisticated bomber used during the war. The plane would ultimately bring the war to an end, dropping the atomic bombs on Hiroshima and Nagasaki. It was the B-29 that Robert Vaucher flew over the Japanese surrender 75 years ago.

Vaucher recounted that mission this week. It was his job to make sure that the formation of bombers — which launched from several different air bases hundreds of miles away from each other — were overhead precisely when MacAruther accepted the surrender of the Japanese.

“I was supposed to arrive with the 500 airplanes behind me at 9:04,” Vaucher said. “We had a rendezvous a hundred miles outside of the target area, which was the battleship Missouri. It came out to about 525 B-29s, and we arrived over the Missouri at 9:04 a.m. That was a feat of my lifetime to make it happen.”

Palacios also helped to preserve one of the only two B-29s flying today, nicknamed Doc. After its retirement from the Air Force in the 1960s, the plane sat in the desert for more than four decades. When it was pulled out of storage, only seven of the rivets that Palacios placed on the airframe were missing. She was part of a crew that restored the plane, which was part of the commemoration this week.

Sgt. Paul Hilliard served as a radioman and gunner on dive bombers in the Pacific, flying 40 missions. Even now, he says he marvels at the advances aviation has made, pointing out that his mother was born before the Wright brothers first flew in 1903.

“It never gets old,” he said, looking at dozens of aircraft on the ground in Northern Virginia. “I’m familiar with most of them — what they did, where, and how and why. So it’s great to see all of them out here.”

The flyover was to be the culmination of two years of planning and coordination. Multiple federal agencies were part of the approval process, as Washington, D.C., is home to some of the most restricted airspace in the country. Because of that, organizers could only conduct the flyover on two days, and there are no plans to reschedule it this year.

Although the flyover couldn’t proceed, organizers are committed to honoring the service of men and women like Hilliard, Palacios and Vaucher, and to honoring the memory of those who made the ultimate sacrifice during the war.

“Our country owes a debt of gratitude to the men and women who made incredible sacrifices to defend our country,” said John Cudahy, president and CEO of the International Council of Air Shows and part of the committee that planned the flyover. “For all of those involved in this event, it has been a genuine honor to help recognize our Greatest Generation on this 75th anniversary.”