Col. Jack C. Jackson
|
Posted: May 26, 2020 10:33 AM
Share   Tweet
The opinions expressed by columnists are their own and do not necessarily represent the views of Townhall.com. 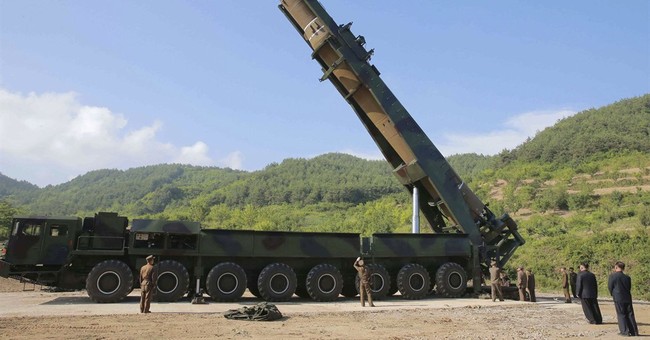 America’s missile defense programs are at a critical moment in history. While the COVID-19 pandemic has seized the global conversation, our country’s adversaries and rogue actors across the earth are taking advantage of the worldwide chaos by quietly bolstering their offensive capabilities. America must respond by ensuring we prioritize funding to adequately prepare our missile defenses.

In spite of the fact that coronavirus cases in Iran continue to rise – just topping 100,000 according to one estimate – hostile actions by the Iranian military have not let up. In late April Iran’s Revolutionary Guard launched the country’s first military satellite into orbit. Many consider this move as a precursor to the development of Intercontinental Ballistic Missiles (ICBMs) which could strike the American homeland or our allies abroad.

At the same time confusion as to the whereabouts and health of North Korea’s young dictator Kim Jong-Un has time raised questions as to who is in charge of the Hermit Kingdom’s nuclear arsenal. Given the fact that the country’s leadership often uses displays of military might to reassert authority and consolidate power, and that the country indicated it would introduce a “new strategic weapon” in the future, it is highly likely that another test may be imminent.

The war of words between the U.S. and China with regards to recovering economic damages caused by COVID-19 has ratcheted up tensions between the two countries. Such proposals have led at least one analyst to caution that such a move could well trigger war and it seems like the People’s Liberation Army could very well be preparing for this eventuality.

Just a few weeks ago the Trump administration released a report alleging that China is conducting secret nuclear tests in violation of international accords. Meanwhile the rollout of China’s Xian H-20 stealth bomber, expected later this year, would complete the country’s nuclear triad of land, air, and sea nuclear forces. The Communist country’s long march towards nuclear parity with the United States is well underway and this should give our military pause.

The sum of all these threats taken together make it clear that America needs to make additional investments in its missile defenses. Yet at this time of rising worldwide hostilities our own homeland missile defense programs are in a state of flux.

President Trump is his FY 2021 budget request has shown his commitment to countering long-term missile threats by funding the NGI, but this interceptor is not expected to be active until at least 2026 and development may stretch into the 2030s. This leaves a critical missile defense gap that must be addressed.

Congress therefore should ensure that in the interim, investments in proven and layered homeland missile defenses are carried out. Innovation and advancement should not surpass immediate and interim safety.

Our AEGIS missile defense system is a prime example of how we can leverage existing technology to meet current threats. AEGIS ships can be deployed around the world, surging into hotspots when needed or can be used to protect the homeland from missile threats that present themselves over the sea. AEGIS Ashore meanwhile could be used as part of a permanent East Coast missile defense site, a sorely lacking component in our current missile defense architecture. The SM-3 missile meanwhile, the interceptor used as part of AEGIS, while designed to protect from short and intermediate range missiles, may also be able to be retrofitted to defeat ICBMs providing great versatility in defeating threats. These systems are all highly tested and sophisticated and are ready now to fill the much-needed gap in missile defense while the NGI is being fielded.

Declining tax revenues and stimulus spending in the wake of the COVID-19 crisis will likely cause Congress to reassess budgets and make cuts, but America cannot afford a decade of silence in response to current missile threats. Keeping the American people safe from missile attack is something that our elected officials simply cannot afford to scale down.

Col. Jack C. Jackson (USMCR Retired) is a retired Marine Corps Aviator who previously served in the Missouri House of Representatives, where he chaired the Joint Committee on Terrorism, Bioterrorism, and Homeland Security.