Colin McNickle
|
Posted: May 18, 2019 12:01 AM
Share   Tweet
The opinions expressed by columnists are their own and do not necessarily represent the views of Townhall.com. 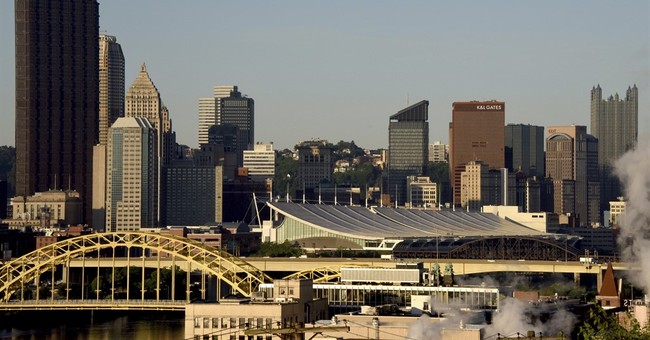 The American Lung Association (ALA) has revived its smear campaign against the Pittsburgh region’s air quality with the release of its latest hyped up “State of the Air” report.

“Fear-mongering” and “disingenuous” is an apropos way to characterize the ALA’s annual exercise in misrepresenting and/or ignoring data to issue dire health predictions, says the president-emeritus of the Allegheny Institute for Public Policy.

“The problem for the ALA is that the health experience in states with widely disparate pollution levels does not match up with its rhetoric,” says Jake Haulk, also a senior advisor at the Pittsburgh think tank (in Policy Brief Vol. 19, No. 19). “Nor do the health statistics and pollution levels match up in Pennsylvania.

“What is in evidence is statistical malpractice,” he says.

It was on April 24 that the lung association issued its 20th-annual report, offering this portentous warning:

“Residents of Pittsburgh and the metro area should be aware that we’re breathing unhealthy air, driven by local emissions, upwind sources and extreme heat as a result of climate change, placing our health and lives at risk,” said Kevin Stewart, the group’s director of environmental health for advocacy and public policy.

But there are four critical lapses in the ALA pronouncements.

“First, it fails to mention that readings in all but one of the region’s air quality monitors measuring particulate matter (pm2.5) concentrations are below the Environmental Protection Agency’s (EPA) maximum annual average guidelines with many well below,” notes Haulk, a Ph.D. economist.

“Second, (the ALA) fails to mention that the EPA limits on pm2.5 have declined massively over the years, dropping from an annual average of 60 micrograms per cubic meter (mcg/m3) of air in 1970 to 15 in 1997 to 12 in 2012,” Haulk says, reminding that Pittsburgh’s air has seen equally large declines in pm2.5 concentrations.

Third, “and most telling,” the think tank scholar says, is that the American Lung Association violates EPA rules in calling the region’s air some of the worst in the nation based on monitor readings near known generators of particulate matter.

Simply put, per the EPA, “The EPA monitoring data represent the quality of air in the vicinity of the monitoring site and, for some pollutants, may not necessarily represent urban-wide air quality.”

Yet, the American Lung Association, wielding a large, overloaded and sloppy brush, regularly violates that admonition.

“In short, neighborhoods in Allegheny County and other surrounding counties are being tarred with the brush of measurements at a handful of monitors with readings above an annual average of 11 mcg/m3 and only one out of compliance (above 12) in Liberty Borough,” Haulk says.

“This unfair maligning of areas away from the offending monitors, by lumping them in with the areas in proximity to those monitors, is detrimental because of the taint it puts on them and almost certainly hurts their ability to recruit new businesses.”

Then there are those lung association claims of potential local adverse health effects – lung cancer among them -- that simply are not supported by the data.

But none of those counties has air quality monitors, typically placed in areas with known or suspected pollution problems.

Similar and even more striking incongruities can be found in heavily polluted California, with only 30 age-adjusted lung cancer deaths per 100,000 people.

“The failure to do more investigation into the differences in lung disease prevalence that do not track as it claims with pollution levels is unprofessional.”