Colin McNickle
|
Posted: May 10, 2018 12:01 AM
Share   Tweet
The opinions expressed by columnists are their own and do not necessarily represent the views of Townhall.com. 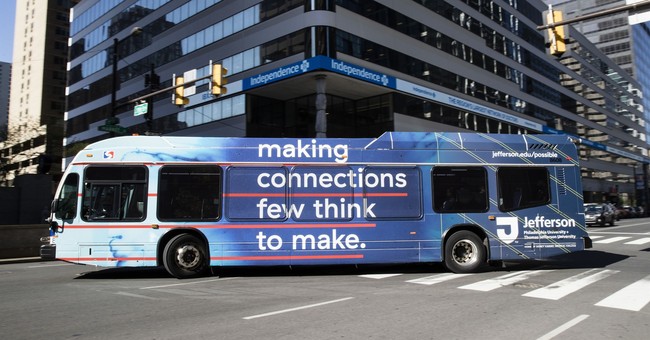 Of 28 major metropolitan areas, only one U.S. mass-transit agency – New York’s – had higher total operating expenses per revenue hour for buses in 2016 than the Port Authority of Allegheny County, new research from the Allegheny Institute for Public Policy shows.

As stunning as that is, when compared with a peer group of 10 comparably sized public transit agencies, the news is worse, says Jake Haulk, president of the Pittsburgh think tank.

The Port Authority’s “bus service is inexcusably costly and imposes far too heavily on taxpayers and turnpike users,” he says (in Policy Brief Vol. 18, No. 18). Management and the state Legislature must bear much of the responsibility for kowtowing to organized labor, Haulk stresses.

Total operating expenses per revenue hour is the most comprehensive measure of operating cost effectiveness for comparison purposes. Such expenses are determined by taking non-capital outlays required to deliver services and dividing them by the hours that buses are on routes, picking up and dropping off paying passengers.

Using data taken from the National Transit Database, New York City’s total operating expenses per revenue hour for buses was $226 in 2016. The Port Authority’s cost was $189.16, topping such large systems as those in Boston, San Francisco and Newark, N.J.

The Port Authority’s costs even topped those of bus systems in Seattle, Philadelphia, Washington, D.C., and Los Angeles.

To analyze this subset, the Allegheny Institute used the ratio of operator wages paid, other employee wages and fringe benefits for all bus-related employees to revenue hours.

Port Authority buses had total operating expenses per revenue hour that were 62 percent higher than the average of the 10-agency comparison group, $189.69 to $117.42.

Pacing the authority’s outrageous cost structure are wages, driver and non-driver. Driver wages of more than $25 an hour were, in 2016, 32 percent above the 10-system average of $18.98. Total operator wages expended per revenue hour to deliver bus service were 30 percent higher than the average.

And then there’s this: Fringe benefits for all Port Authority bus service employees, calculated on an expense per revenue hour basis, were $73.76 in 2016 versus the average of the 10 peer agencies’ $36.27 – 100 percent higherthan the group.

“Consider that if the Port Authority of Allegheny County had the same cost structure as the 10 similar size agencies, it would have cost $114.8 million less than the $301 million the Port Authority actually spent for the 2016 level of service,” says Haulk, a Ph.D. economist.

The bottom line is that buying labor peace from strike-threatening unionized Port Authority employees has come at a steep cost, not to mention putting upward pressure on fares and the need for ever more state funding (diverted Pennsylvania Turnpike tolls included) and matching federal funding, notes Haulk.

“The decision made by the Legislature to allow unionized transit workers to strike and the unwillingness of management to face down unions threatening to strike has resulted in a cost structure that is far outside the norm,” he says.

“Why does the Legislature countenance this glaringly overly expensive transit system and make no effort to rein in the spending and at the very least remove the right of transit workers to strike?”