Colin McNickle
|
Posted: Dec 21, 2016 3:00 PM
Share   Tweet
The opinions expressed by columnists are their own and do not necessarily represent the views of Townhall.com. 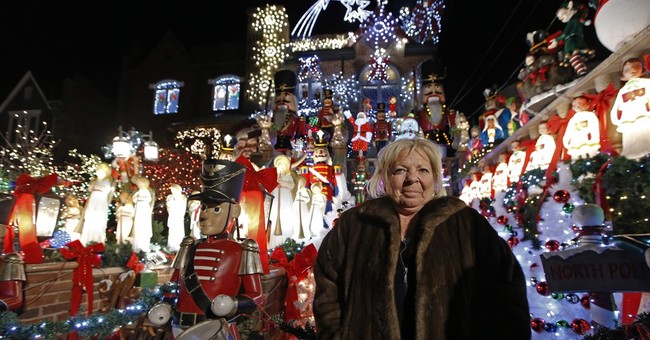 Author’s note: One of the great joys during my 22 years at the Pittsburgh Tribune-Review (18 of those as editorial page editor) was writing special Christmastime essays and columns. The two below were among my favorites; many readers felt the same over the years. With Christmas nigh, it is only appropriate to share them anew. The first, “A manger’s light,” is from 2011. The second, “The dusk before Christmas,” is from 2006. Merry Christmas, every one.

The old “manger scene,” as we called the family Nativity display, has seen better days. But it's that charm of wear that fuels so many memories. And one very special light bulb.

The manger was built by Pop, our paternal grandfather, out of branches. There's a bin for hay and a handcrafted aluminum housing that holds a small light bulb and serves as the base for the integrated red star atop.

Most of the Nativity's figures came from the old Stone & Thomas department store in Wheeling, W.Va. — cast in plaster, hand-painted and whispering, “Break me!” And broken and glued back together many were many times over many years.

One figure actually resembled Pop. A brother insisted it was him. Pop sure was old.

The manger scene spent most of the 1960s and '70s in a bedroom shadow box, its light just bright enough and angled just so that, as a kid, it guaranteed there would be no sleep on Christmas Eve, the longest sleepless night of the year.

The display didn't see much use again until retrieved from the Ohio bedroom closet more than a decade ago and brought to Pittsburgh. And since, more than a few additional drops of glue have been dispensed. The manger scene graces the fireplace mantle every year.

As per custom, the light will stay on all night as Christmas Eve turns to Christmas Day. And that light will come from the very same bulb that once made sleep so difficult so many years ago — a bulb that's all the more illuminating all these years later.

The dusk before Christmas

Comes a time on Christmas Eve when something extraordinary happens at my house. Above and beyond what already makes this day so phenomenal, that is. That “something” is the first hint of dusk.

The last-minute shopping is done.

Ample firewood has been gathered and stacked on the front porch for the first part of the long holiday “burn.”

Pine cones, a little sweetener for the kindling, have been collected in the next parklet over.

The dips and deviled eggs and libations are chilling in the fridge. So, too, are the beginnings of the fixin's for the Christmas Day feast.

If it's an early church service to come, the traditional roast beast, seared crispy brown on the outside and tantalizingly medium rare on the inside, has been devoured. As have been the mashed potatoes (1 part potato, 6 parts butter).

Somebody's sneaking a dip of bread into the boat of the remnants of the six-hour gravy.

The dishes otherwise are done.

Some of the illumination engineers in the neighborhood are a tad switch-happy — holographic choo-choo trains chug away down the street; discordant blinking white lights dance across the way.

But most of the outside Christmas lights are not yet on; perhaps those neighbors know the majesty of this moment in time, too.

Inside, the Fraser fir glows in red, yellow, blue and green. A rustle of air from a door closing sends the mini-blades slowly rotating in three decorations that have adorned Christmas trees in this family for six decades or more.

The dogs are sleeping near the fireplace, the flames low and the heat just right.

Brinkley, the younger but larger of the two, surely has visions of gratitude dancing through her head this year. She escaped death after slipping out of her collar and being clipped by a car. She's sore but doing well.

The kitties, having stealthily circled, rest against the dogs' backs. Bailey, the older but smaller dog, snores; the cats purr. Bailey's left eye opens from time to time, a halfhearted attempt to guard the hearth.

Strains of a Christmas carol — Perry Como, circa 1962 — lightly crackle and pop from the newfangled retro turntable. A dime on the tone arm prevents skipping. Some things never change.

The model trains, their rheostats turned low, slowly traverse the platform, under and over the bridges, through the hills and around the lake.

As wondrously simple and tranquil as all this inside “activity” is, a phenomenal minuet of nature has begun to unfold in the backyard.

The squirrels have begun scurrying from the top of the hemlocks, performing their death-defying leaps onto the box elder. They've climbed down for a look-see. Up the fence post and across the split rail they go.

The attraction is a gift from the landlord — fresh Christmas seed.

It is a feast of the best sunflower, safflower, millet, sorghum and pine nuts available on the market today. Well, at least that's what the guy at the hardware store told me.

With nary a sound Chip ‘n' Dale & Co. go quickly to work. They must be fans of Clement Clarke Moore. They're going for the striped sunflower seed, selecting the prime ones, falling back on their haunches and savoring each nibble.

A startlingly bright cardinal is not far behind. His first forays are reconnaissance missions. But, soon, those quick darts from the towering blue spruce above are replaced with visits that linger. Either his comfort level has risen or the seed really is that good.

And then, as if on cue in a grade-school Christmas play, come the deer. In the fading light they seem to appear out of nowhere. They've arrived via the terrace — just below the almost-dormant garden still sporting fresh parsley — from the neighbor's high grass where they often bed down.

Deer heads poke over the railing; deer tongues stretch long for a taste. The squirrels hop to the ground, not out of fear but in a sense of sharing, partaking with the unstartled cardinal.

Set now is the sun.

Subtle are the winds.

Sweet is the smell of the crisp air. The smoke from the fireplace indicates someone has just thrown on a well-seasoned piece of apple wood. Perhaps it's Green Delicious.

One by one, the rest of the neighbors' Christmas lights flick on.

The moment is about to end. The dusk before Christmas Eve is gone.

And as Tennyson said: “The time draws near the birth of Christ; The moon is hid; the night is still; The Christmas bells from hill to hill; Answer each other in the mist.”

Merry Christmas, every one.