The Jihadis In France, The Islamists In Turkey

Cliff May
|
Posted: Jul 20, 2016 10:20 AM
Share   Tweet
The opinions expressed by columnists are their own and do not necessarily represent the views of Townhall.com. 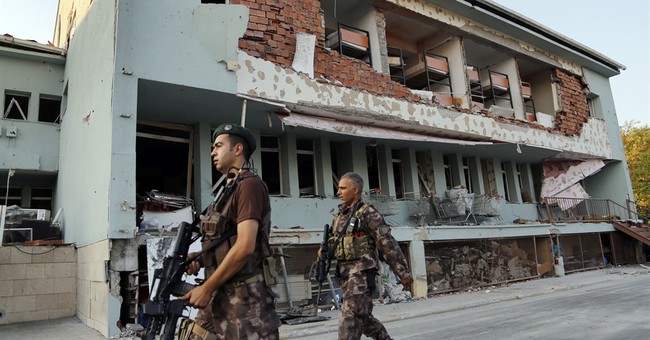 Streets ran red with blood in both France and Turkey last week. A terrorist atrocity and an attempted coup are quite different events. But underlying both is this question: How are the most dynamic forces within the Islamic world shaping the 21st century?

Jihadism is, as should be obvious, one of those forces. Those fighting what they call a holy war — al Qaeda, the Islamic State and the Islamic Republic of Iran among them — regard “others” as enemies who must submit or be conquered or be killed. Their goal, and they’re candid about this, is to establish Islamic domination anywhere they can and, eventually, everywhere they can.

To call such behavior radical or extreme is ahistorical. They are doing what tribes, nations and empires have done since time immemorial. It is we in the West who have deviated from the norm by insisting that it has somehow suddenly become natural for peoples to peacefully coexist, to celebrate their differences, and to accept compromises rather than pursue victories.

To make matters worse, moral relativists have undermined what should have been unshakeable Western values. After the attacks of Sept. 11, 2001, we had an opportunity to make a persuasive case that no cause or grievance justifies intentionally killing other people’s children. Instead, prominent voices (e.g., Stephen Jukes, then global news editor of Reuters, today a professor of journalism) insisted that “one man’s terrorist is another man’s freedom fighter.”

Mohamed Lahouaiej Bouhlel — the 31-year-old Tunisian man who used a 19-ton refrigerator truck as a lethal weapon during Bastille Day in Nice last week — no doubt saw himself in that heroic light. The Islamic State called him their “soldier.”

Mr. Bouhlel succeeded in murdering 84 people and injuring more than 200. The victims were of various nationalities and religious backgrounds and included 10 children. Did he have accomplices? A half-hour before the attack he texted a message to someone saying: “Bring more weapons.” Seven people linked to the assailant have reportedly been taken into police custody for questioning.

As for Turkey, once it was the model: a Muslim-majority state that embraced secularism, modernity, tolerance and democracy. No longer.

Two paragraphs of history: The Republic of Turkey arose in the 1920s from the ashes of the Ottoman Empire — the last great Islamic empire and caliphate. To be more exact, Turkey was pulled from those ashes by Mustafa Kemal Pasha, a dashing army officer who became the founding father of the Turkish nation-state — that’s the meaning of “Ataturk,” the surname later bestowed on him.

President Ataturk saw Europe as the bright future and the Muslim world as the benighted past. He separated mosque and state, diinished the authority of Islamic religious law and, in general, attempted to modernize and Europeanize his country. After World War II, Turkey would become a multiparty democracy.

Since 2013, however, Recep Tayyip Erdogan has dominated Turkish politics. He has become increasingly authoritarian and illiberal, for example closing newspapers and imprisoning journalists who criticize him.
Never a Kemalist, it may be no exaggeration to call him a neo-Ottoman and a wannabe sultan who envisions himself leading not just Turkey but the wider Islamic (or at least Sunni) world. He has been known to receive foreign dignitaries accompanied by actors dressed in costumes representing the 16 great Turkic Empires of the past.

President Erdogan has likened democracy to a streetcar: When you reach your stop, you get off. And it appears his stop is the Muslim Brotherhood station. An unreliable ally in the fight against the terrorist groups in Syria and Iraq, he also conspired with Iran’s rulers to undercut American economic pressure. Turkey’s value as a NATO ally has increasingly come into question.

Friday’s coup attempt left at least 290 people dead and more than 1,400 injured. The military officers who attempted to topple Mr. Erdogan may have been hoping to save Ataturk’s legacy and steer Turkey away from Islamism. That was the purpose of four successful military coups in the past (in 1960, 1971, 1980 and 1997).

Or, as Mr. Erdogan claims, the coup may have been engineered by Fethullah Gulen, a wealthy cleric, once an ally, now a rival-in-exile (living in the Poconos of all places). Mr. Erdogan is angrily demanding his extradition. Absent hard evidence, the U.S. government will be reluctant to comply. Should Mr. Erdogan use Incirlik, NATO’s air base in Turkey, as a bargaining chip, a crisis in U.S.-Turkish relations would likely result.

Here’s what to expect now: Mr. Erdogan’s top priority will be to eliminate his enemies — as well, no doubt, as his opponents and critics. He has announced: “This uprising is a gift from God to us because this will be a reason to cleanse our army.” More than 20,000 officers, soldiers, police, prosecutors, judges, civil servants and others already have been dismissed or detained. What’s the chance all of them are coup plotters?

So long as Mr. Erdogan is in power Turkey is not likely to become more secular, more democratic or pro-Western. His agenda is Islamist, which means he agrees with jihadis on the imperative of Islamic supremacy and the need to re-establish a global Islamic state. He just doesn’t think the sword — or the 19-ton truck — is the only means to that glorious end.

American leaders have repeatedly emphasized that the West is not at war with Islam. But powerful forces within the Islamic world are at war with the West. That’s an uncomfortable truth but one that must be acknowledged before a serious strategy can be forged to defend the United States and its allies. This was always going to be a long war. The more we dither, the longer — and costlier — it will be.