The Search for Elusive Iranian Moderates

Cliff May
|
Posted: Mar 09, 2016 12:22 PM
Share   Tweet
The opinions expressed by columnists are their own and do not necessarily represent the views of Townhall.com. 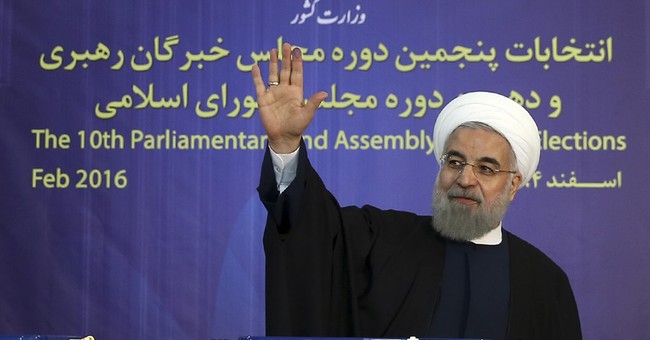 Ruhollah Khomeini was a man of religious faith and revolutionary fervor, committed to waging jihad until, in his words, “the writ of Islam is obeyed in every country in the world.” But when he took power in Iran in 1979, the U.S. ambassador to the U.N, Andrew Young, described him as “some kind of saint.”

The U.S. ambassador in Tehran, William Sullivan, compared him to Mohandas Gandhi, the pacifist leader of the Indian independence movement. A State Department spokesman worried about the possibility of a military coup that “would blow away the moderates and invite the majority to unite behind a radical faction.”

A few months later, the seizure of the American embassy and the holding – not to mention the brutal mistreatment -- of diplomatic hostages illustrated how far off the mark those analyses had been. Yet the search for the elusive Iranian moderate theocrat has continued unabated ever since.

Elections at the end of February have apparently bolstered the position of President Hassan Rouhani. Though sophisticated and pragmatic, “Rouhani is not a moderate, he is a hardliner.” Those words were recently spoken by Wendy Sherman, former Under Secretary of State who served as President Obama’s lead negotiator on the Iran nuclear agreement, the Joint Comprehensive Plan of Action.

Did the elections at least represent, as The New York Times asserted, “a serious setback for the conservative Islamic establishment, headed by the supreme leader, Ayatollah Ali Khamenei?” The evidence is unconvincing.

Ayatollah Khamenei became supreme leader in 1989, following the death of Ayatollah Khomeini, who had established a system of governance -- velayat-e faqih, Guardianship of the Islamic Jurist – that fuses, rather than separates, mosque and state. The supreme leader must be a cleric and an expert in religious law. His edicts cannot be appealed. He commands all branches of government -- executive, legislative and judicial -- as well as the military, including the elite Islamic Revolutionary Guard Corps. There are neither checks nor balances.

Iran’s most powerful governmental body is the Guardian Council. Its 12 members are not elected. Six are appointed directly by the supreme leader, and six are proposed by the judiciary and approved by the Majles, the Iranian parliament.

Iranians also voted for the Assembly of Experts, clerics whose most important responsibility will be to choose the next supreme leader following the death of Ayatollah Khamenei who is 76 and said to be in poor health. Candidates for this body, too, must have Guardian Council approval – which means reformists and moderates need not apply.

Nevertheless, as noted by Saeed Ghasseminejad, my colleague at the Foundation for Defense of Democracies, numerous media reports have made it appear that “disqualified reformists somehow rose from the dead and dominated the elections. The results, however, show that in the Assembly of Experts, the radicals won 75 percent of the seats while the rest were shared by independents and the pragmatic alliance led by Rouhani and ex-presidents Hashemi Rafsanjani and Mohammad Khatami.”

Mr. Rouhani, you may recall, was elected president in 2013, four years after a blatantly rigged presidential election led to a mass uprising that was ruthlessly suppressed. Then, as now, President Rouhani was widely praised for his supposed moderation. Britain’s Guardian newspaper predicted that Iran was “on the brink of an extraordinary political transformation.” In truth, the human rights situation has only grown worse and support for terrorists abroad has increased. Mr. Rouhani was never the supreme leader’s rival. He has been instead the supreme leader’s loyal servant and advisor.

We can surmise that he has counseled the supreme leader to adopt a policy of strategic patience, building Iran’s economic and military strength at a time when he perceives – not without justification – increasing European and American weakness.

The nuclear deal should be seen in this light. It brings the regime front-loaded benefits in return for a pledge to delay – not end – the nuclear weapons program whose existence the regime has never acknowledged.

So are there no moderates in Iran? On the contrary, there’s every reason to believe that most Iranians view Americans kindly, are tired of being ruled by firebrand divines, would rather not see Iranian oil wealth lavished on Syrian dictator Bashar al-Assad, Hezbollah and other terrorist groups, and would welcome more freedom.

But most Iranians are powerless. Despite what much of the media has been telling you, Iran’s elections haven’t changed that – and never will. The Islamic Republic of Iran is not very republican; its version of Islam is Khomeinist – repressive, aggressive and implacably anti-American.

Within Iran’s ruling elite, there are serious differences over how to achieve the goals of the Islamic Revolution: Hardliners disagree with ultra-hardliners and both disagree with pragmatists.

But on the goals themselves there is consensus. All envision Iran becoming the Middle East’s new master. All want to see the “arrogant” U.S. humbled. All agree with Ayatollah Khomeni who said in December 1979: “In the revolution that was achieved in Iran, people were screaming that they wanted Islam; these people did not rise up so their country could have democracy." It is the task of Iran’s theocrats to make sure they never do. To believe otherwise is wishful thinking, a poor substitute for analysis.