Way Down in Egypt's Land 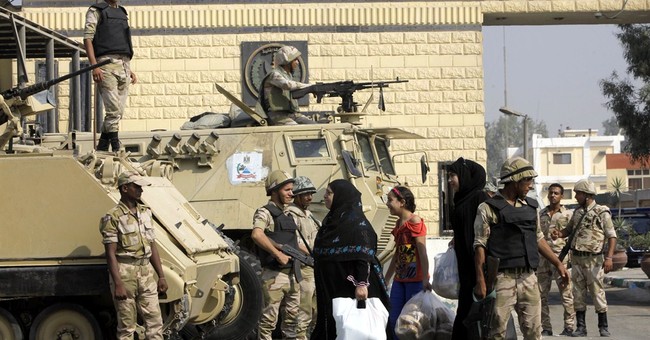 President Obama wants to keep aid to Egypt’s new military rulers flowing. So does Republican former ambassador John Bolton. Democratic (and Muslim) congressman Keith Ellison wants to cut aid to Egypt. So does Senator John McCain, often labeled an interventionist, and Senator Rand Paul, characterized as an isolationist. In other words, the crisis in Egypt is making very strange bedfellows. I don’t find myself comfortably in the sack with anybody.

Take the Working Group on Egypt, more than a dozen smart scholars and experienced foreign policy experts from both parties. A statement they released last week begins: “Despite the mistakes committed by former president Mohamed Morsi and the Muslim Brotherhood over the past year and despite the incitement and violence demonstrated by some Brotherhood supporters . . . ”

Despite the mistakes? Are we to understand that by appropriating pharaonic powers, undermining the judiciary, jailing journalists (and even comedians), persecuting Christians, and torpedoing the economy Morsi was merely committing a few rookie errors?

Actually, Morsi made just one blunder: He was insufficiently deceitful. He could not be bothered to pretend, even for a little while, that he gives a fig about rights and freedoms, checks and balances, the rule of law, and the economic well-being of his fellow countrymen. His goal was to establish an Islamist state, a Muslim Brotherhood autocracy, with himself as supreme leader. He wanted to get that done as quickly as possible. Is that not clear to all with eyes that see?

And what does the Working Group mean by saying that “some Brotherhood supporters” have been responsible for incitement and violence? Was it only supporters — not Brothers themselves — who wielded machine guns, set churches ablaze, and humiliated nuns? Were other Brothers and supporters outraged by such behavior, signing ads in Egyptian newspapers declaring, “Not In Our Name!”?

On the other hand, I’m not with those who applaud and would reward General Abdel Fattah al-Sisi for a crackdown that ended with more than a thousand killed — most during street battles, to be sure, but dozens more while being held in government custody.

No doubt Sisi is sending a message to his enemies that he is a hard man, not some Westernized give-peace-a-chance goo-goo. In light of all this, I don’t see how President Obama could not have canceled scheduled exercises with the Egyptian military. (By the way, such exercises are to prepare the military in case of an invasion from which neighbor?)

The editorial writers at the Wall Street Journal — also a savvy bunch — argue against going further and cutting aid to Egypt, saying that while doing so “would offer some moral satisfaction in the short run, it wouldn’t make General Sisi any more likely to allow a democratic transition.”

That seems to me to miss a key point: American law mandates that aid stop after a military coup. And despite the conspicuous head-scratching at the White House, a military coup is what has taken place in Egypt. There’s no serious question about that.

Would it not have been a useful object lesson had Obama said that — like every other American citizen — he is obliged to obey the law? If he thinks this a bad law — I would tend to agree — he could then work with Congress to repeal or fix it. That’s how democratic governance is supposed to function.

While sitting down with legislators, why not also agree on a set of conditions that Egypt’s military rulers will need to meet before the next check or F-16 is in the mail? Aid should never become an entitlement. American taxpayers deserve to know precisely what they are funding. Too often that is not the case.

Conventional wisdom holds that American money keeps Egypt’s military from tearing up the peace treaty with Israel. More plausible: Egyptian generals realize that another conflict with the Jewish state would end in their defeat and humiliation, and perhaps the return of Israel to Egypt’s land — the Sinai in particular. If this thesis is correct, it suggests that peace can most effectively be preserved by strengthening Israel — by sharpening its “qualitative military edge” over potential adversaries — rather than by sending more money, tanks, fighter jets, and helicopters to General Sisi and his friends.

Final point: A great and historic upheaval is taking place not just in Egypt but throughout the Muslim world. It should by now be evident that there never was an “Arab Spring” — the blossoming of a new season of freedom. Nor is there an “Arab Awakening” — a widespread recognition that peace, prosperity, and dignity can be achieved through the establishment of liberal-democratic governance. What are we looking at instead? Anger, frustration, and ambition within societies that have become frighteningly dysfunctional, and in which poisonous ideologies based on dreams of conquest and glory — blended with nostalgia for an imagined past — have taken root.

Both America’s expectations and its policies require adjustment. If Egypt’s generals can be persuaded to see their immediate mission as pacifying the country, beginning the process of economic recovery, protecting minorities, and guaranteeing basic rights even while countering the militant, supremacist, and anti-democratic Islamists — a delicate balance, to be sure — it will be in our interest to assist them.

Four years ago in Cairo, President Obama delivered what he believed to be a major address. With members of the Muslim Brotherhood invited to sit in the front row, he said that “human history has often been a record of nations and tribes subjugating one another to serve their own interests. Yet in this new age, such attitudes are self-defeating. . . . Our problems must be dealt with through partnership; progress must be shared.”

Those are fine sentiments. I’m sure they resonated with some Egyptians. Those Egyptians deserve our friendship and support. But let’s be realistic: Whatever happens, those Egyptians are not going to be in positions of leadership or power any time soon.