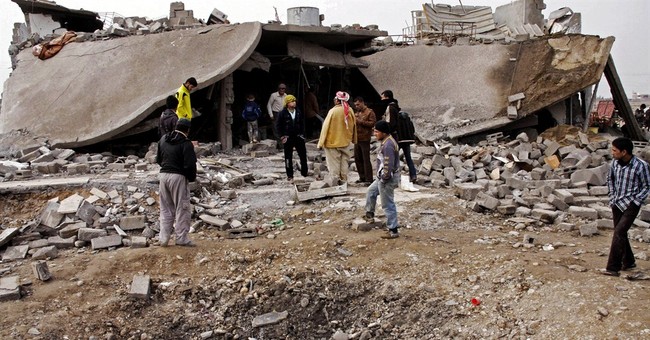 The Zaatari Refugee Camp sprawls across the featureless, colorless desert of northern Jordan, six miles from the border with Syria, a country torn limb from limb by civil war. Among its 120,000 residents, the conventional wisdom had long been the same as in Washington, D.C: Surely, the fall of Syrian dictator Bashar al-Assad is inevitable and imminent; once that happens, the displaced can go home. But on June 5th, Hezbollah fighters from Lebanon defeated Syrian rebel forces in the strategic city of Qusayr. “Now, the refugees are saying, ‘The rebellion is not succeeding, we can’t return, we will have to stay.’ Psychologically and practically, this is a significant change.”

Telling me this is Kilian Kleinschmidt, a burly 50-year-old Berliner, employed by the United Nations High Commissioner for Refugees. For the past three months, he has been the camp’s senior field coordinator -- the “mayor,” he half-jokes. We are sitting in Kleinschmidt’s office, a white, metal, prefab “caravan.” He is an old pro who has run refugee camps in tough corners of the world before: Kenya, Pakistan, the Congo, and Somalia among them.

“It was better even in Mogadishu,” he says. “There, at least, I knew who were my friends and who were my enemies. Here, it’s a 10,000-piece puzzle. This is an unhappy place. And it’s a very dangerous place. There are some bad people here and they are holding everyone else hostage.”

Among those bad people: thieves, vandals, counterfeiters, rapists, drug-traffickers, smugglers, youth gangs, “mafias” and “revolutionaries.” As to the last category, Kleinschmidt says: “I’m not yet equipped to map out their ideologies.” But he has seen the flags of both the Free Syrian Army and Jabhat al Nusra, an al Qaeda affiliate.

Most of those living here have lost family members and property. Despite such traumas, or perhaps because of them, they are quick to express grievances, and their protests frequently spiral into riots. “We have a lot of violence both among the refugees and with the staff,” Kleinschmidt says matter-of-factly. “We had six staff injured just last week. I still have a sore throat from the teargas.”

Jordanian policemen have been assigned to maintain order in Zaatari. Success has eluded them. “About six weeks ago, two policemen were killed and 12 injured,” Kleinschmidt notes. “One was dragged from his car and hit with rocks.”

Theft is a chronic problem: of food, supplies, electricity (spider webs of wires parasite power lines in some of the camp’s “neighborhoods”), and even caravans. “They take steel fence posts, and put wheels on them, and then move the caravans,” Kleinschmidt says. “We actually had a police station stolen – 8 caravans. They simply disappeared when one team of police had left and another had not yet arrived. Nowhere else have I have seen such things.”

Jordan is now hosting an estimated 560,000 Syrian refugees. Those in the refugee camps drain scarce resources -- water and energy in particular. Those who have slipped into Jordan’s cities compete for jobs and housing, and may engage in crime or pose security risks.

Jordan’s total population is only about 6.4 million, which means that if Zaatari were a city, it would be the country’s fifth largest. In fact, it is increasingly taking on urban characteristics. There are now streets lined with stalls offering everything from rotisserie chicken to ice cream to clothes to home appliances. Kleinschmidt tells me one can also find brothels and gambling dens.

Yet Kleinschmidt does not seem overwhelmed. On the contrary, he is remarkably cheerful and justifiably proud of the job he’s doing: establishing an oasis in the desert -- a troubled oasis, to be sure, but one in which lives are being saved.

If the refugees can’t return to Syria anytime soon, Kleinschmidt will do what he can to improve their lives here. For one, he wants them all to live in caravans -- which have windows, floors and doors that lock -- rather than tents. For another, he wants to license what is now unregulated commerce and prevent criminal gangs from “taxing” the merchants. He wants to give residents some responsibility for governing themselves and securing their “neighborhoods.” More of them also need to work, he says, and to use the money they earn to pay for the services they receive, so they don’t become dependent and idle, a combination that, he understands, breeds trouble.

None of this comes cheap, and the wealthy Arab oil-exporting states of the region are not digging deeply into their pockets. Nor are Americans and Europeans feeling enthusiastically philanthropic these days. The UN has issued a $5 billion emergency appeal, the largest in its history.

It’s anyone’s guess when the fighting in Syria will end. President Obama has now promised to send arms to the rebels. No one is confident such assistance will be sufficient to alter the trajectory of the conflict. And if Assad -- with robust Iranian, Hezbollah and Russian support -- should emerge victorious, he may not welcome the refugees back with open arms. Jordan is not the only neighbor of Syria hosting refugees: There are at least a million more in Lebanon and Turkey. The river is still rising. It’s likely that the situation will get worse before it gets better. It’s not unlikely that it will get worse before it gets worse.