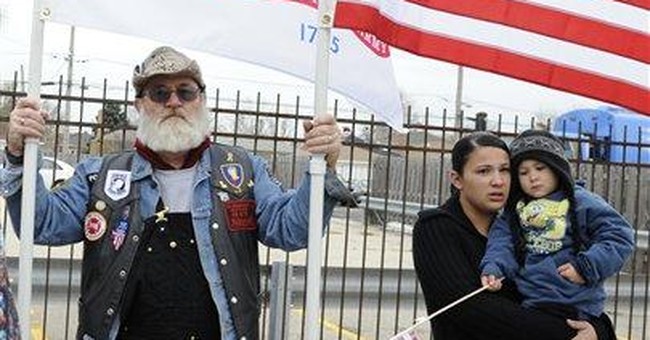 When a military officer participates in a war against his own country, that is high treason, and that is the charge that ought to be brought against Maj. Nidal Malik Hasan. But it's not going to happen.

Hasan should have been weeded out of the military long ago. There was abundant evidence that his allegiance was not to the United States -- the country that had given his immigrant family safe haven and provided him the opportunity to become, at taxpayer expense, a physician, an officer and a gentleman. It was apparent that he had come to view himself not as an American soldier but as a "Soldier of Allah" -- the phrase he had printed on his business cards - and that sooner or later he would wage war against the "unbelievers."

Why did none of those who saw something say something? In a culture where the value of diversity trumps the requirements of security, to do so would have been career suicide. There was no way that was going to happen.

Let's be clear: The lesson of Fort Hood is not that Muslims in the U.S. military are a fifth column. But neither can we continue to blithely assume that someone like Hasan - American-born, well educated, apparently sophisticated -- could never succumb to the temptations of what the politically correct call "violent extremism."

Paradoxically, the Fort Hood massacre highlights the fact that Muslims soldiers who are doing their duty as proud, patriotic Americans are extraordinarily independent-minded and brave. Because while there is no evidence that Hasan was ever harassed for being a Muslim -- as some of his relatives have charged -- there is a long record of Muslims who criticize Islamists being denounced as apostates - a sin that can bring a fatwa and the death penalty. "Patriotism is paganism," the Ayatollah Ruhollah Khomeini famously said. Khomeini was a Shia Islamist but on this theological point Sunni Islamists emphatically agree.

Out of ignorance or wishful thinking, Western commentators sometimes assert that Muslims who preach intolerance and belligerence are "heretics" who have "hijacked" a great and peaceful religion. But no Muslim authority would say that - not even those who denounce terrorism. How, after all, can a fundamentalist be a heretic? How can someone who insists on a literal reading of the Koran be accused of misrepresenting what it says?

Some Western commentators also assert that there is a "civil war" taking place within "the Muslim world." It would be simpler and more encouraging if that were the case.

In reality, there are the many Muslims who look upon the West with disfavor but would not sacrifice themselves and their families to destroy it. They may even live in the West -- enjoying the opportunities and freedoms the West provides.

A second faction, small but deadly, do act on the conviction that Christians and Jews are vermin. They become what they call jihadis, holy warriors -- revolutionaries on a mission from God, no hyperbole intended.

A third faction chooses to interpret their religion in a moderate, tolerant way and integrate it into the modern world, alongside the other great religions. But only a very small number are activists who put their lives on the line by publicly challenging the fascistic reading of Islam championed by Iran's rulers, the leaders of al-Qaeda and the Taliban, the Muslim Brotherhood and Wahhabi clerics.

No battles or even protests were ever staged outside the Dar al-Hijra mosque in Northern Virginia where Anwar al-Aulaqi preached a hateful and violent theology. Maj. Hasan was among those who worshipped with -- and was inspired by-- al-Aulaqi, an American-born cleric who five years ago decamped to Yemen. In recent days, Al-Aulaqi has described Hasan as a "hero," adding: "The only way a Muslim could Islamically justify serving as a soldier in the US army is if his intention is to follow the footsteps of men like Nidal."

Islamism is today advancing on multiple fronts. Khomeini's successors have reduced Syria to a satrapy. Hezbollah, Iran's terrorist proxy, is increasingly powerful in Lebanon. Tehran also has made common cause with Hamas in Gaza, and with such leftist autocrats as Hugo Chavez in Venezuela. Turkey is shifting closer to Iran while drifting from traditional Turkish secular nationalism. Pakistan, conceived as a pluralist nation, is now an Islamic Republic and struggling to decide what that means, and with whom it should be allied.

The French Revolution, the Russian Revolution, the Chinese Revolution - all sought to liberate society from religion. By contrast, Islamist revolutionaries intend to liberate society from all religions but one in pursuit of a glorious future modeled on what they claim as a glorious past. They mean to knock down any remaining walls between mosque and state, to spread Islamic law, Sharia, around the world, and in time to humble, defeat and conquer their enemies, the "infidels." It's an ambitious agenda but they are determined, ruthless and well-financed thanks to the West's addiction to oil, most of which is found in lands ruled by them or those sympathetic to their mission.

The revolutionary jihadis also have this advantage: the reluctance of so many in the West to accept that a serious war is being waged against them -- even after an American military base in Texas has been turned into a killing field by what appears to have been a turncoat furious over Islamist grievances, driven by Islamist dreams.

In his remarks at the memorial in Fort Hood last week, President Obama said: "No faith justifies these murderous and craven acts." But the faith embraced by Maj. Hasan, al-Aulaqi and millions like them has been invoked to justify the slaughter of Christians, Jews and Muslim dissidents for decades. It would be enormously helpful if our political leaders would acknowledge this reality and consider its policy implications. But that's not going to happen, at least not any time soon.